This weekend Americans celebrate Independence Day. July 4th is a day of high patriotic spirits, family picnics, beer and fireworks. We get a little rowdy, sing the national anthem, wear red, white and blue outfits, wave flags at one another.

One of the first patriotic ditties we learn as children is “Yankee Doodle Dandy”. Being a horse lover from birth, this was always one of my favorites because of “pony”. But it never made sense to me. So I did a bit of googling and learned why the words seem so silly.

During the Revolutionary War both British and American soldiers sang the tune.  One of the early British verses made mockery of the American’s general inability to properly execute the latest dance steps with the young ladies.

Yankee Doodle, keep it up.

Mind the music and the step

And with the girls be handy.

After the British lost the Battle of Bunker Hill, they stepped up their musical insults adding a new verse to their repertoire.

Riding on a pony.

He stuck a feather in his cap

And called it macaroni.

This verse doesn’t make much sense until you understand their 17th century meaning.

“Doodle” is thought to be a derivative of “dodel” which is Low German for “fool or simpleton”.

“Macaroni” was a London fashion movement of the time. Members of the Macaroni Club were the peacock dandies of their day. They wore ridiculously large wigs, bright striped stockings, carried parasols and wore feathers in their hats. They also wore two fob watches—”one to tell what time it was and the other to tell what time it was not” ran their joking explanation. The Macaroni’s, so named because they loved to eat macaroni.

This new verse outright calls the colonials fools; that Yankees were so unsophisticated to think that simply sticking a feather in a cap would make them the height of fashion. Ouch! Singing tunes at the enemy seems a pretty tame way to toss an insult. Next time someone flips me off; I’ll consider this more genteel approach before I volley back my response (not).

Yankee Doodle Dandy is the anthem for which state? 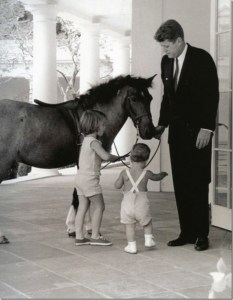 President John F. Kennedy from Massachusetts bought a pony for his daughter Caroline while he was in the White House. The family named it “Macaroni” after the song Yankee Doodle, although the name refers to the feathered cap rather than the pony.