He is the tragic genius who painted sunflowers and starry nights like no one before him. One would be hard pressed to find someone who never heard of Vincent Willem Van Gogh. His name alone conjures images of layered brush strokes and brilliant color giving us timeless expressions of rural landscapes and 19th century life.

Van Gogh was born March 30, 1853 in Zundert, Holland. He began painting in 1880 with the hope of “inspiring happiness and creating beauty” through his work. Within 10 years he created nearly 2100 artworks including 860 oil paintings most of which were created during the last 2 years of his life. In his lifetime he sold one painting “The Red Vineyard” for 400 Francs.

Much of his work today is consider masterful coveted by museums and collectors and commercialized to the point that his style has become universally recognizable. Few people however are aware that Van Gogh also painted horses.

He lived during a time when horses were ubiquitous. They were transportation and delivery for a generation just being introduced to railways. For a man who painted every day genre it is not surprising that Van Gogh painted horses though they were not his favorite subject.

Photography Courtesy: the Van Gogh Museum
Feature Image Detail from the Painting, “A Road in Auvers after the Rain”, 1890. Oil on canvas. The Pushkin Museum of Fine Art, Moscow, Russia.

Tap any image within the slideshow for a larger view. 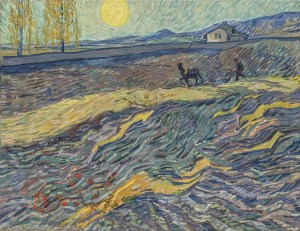 The second highest price paid for a Van Gogh was a painting of horses, “Laboureur Dans Un Champ” sold for $81.3 million (US). It was the first painting in nearly a year and a half following an epileptic attack, painted from his view out a French asylum window.

Writing About the Horses in Paris 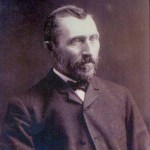 The Van Gogh family were prolific letter writers. Nearly all the letters Vincent wrote to his brother, Theo, were saved by Theo’s wife, Jo. Vincent however saved few of Theo’s letters. Following is an excerpt from a letter Vincent wrote to Jo May 9, 1990. While in Paris, Vincent had several things on his mind – the city, his legacy and horses.

…It’s quite odd perhaps that the result of this terrible attack is that in my mind there’s hardly any really clear desire or hope left, and I’m wondering if it is thus that one thinks when, with the passions somewhat extinguished, one comes down the mountain instead of climbing it. Anyway my sisters, if you can believe, or almost, that everything is always for the best in the best of worlds then you’ll also be able to believe, perhaps, that paris is the best of the towns in it.
Have you noticed yet that the old cab-horses there have big, beautiful heartbroken eyes, like Christians sometimes. Whatever the case, we’re not savages or peasants, and we perhaps even have a duty to love civilization (so-called). Anyway, it would probably be hypocritical to say or believe that Paris is bad when one lives there.
…I shall count myself very happy if I manage to work enough to earn my living, for it makes me very worried when I tell myself that I’ve done so many paintings and drawings without ever selling any. Don’t be in too much of a hurry to consider this an injustice, I don’t know anything at all about it.

Do you know the correct answer to the question below. Check your by tapping on the box. Good luck!

Van Gogh cut off his ear after being rejected by a woman. 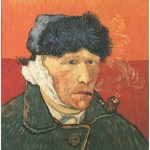 Van Gogh suffered from psychotic episodes and delusions and though he worried about his mental stability, he often neglected his physical health, did not eat properly and drank heavily. His friendship with artist, Paul Gauguin ended after a confrontation with a razor when, in a rage, he severed part of his own left ear.