Tim Conway Wanted To Be A Jockey

He grew up in suburban Cleveland, Ohio (USA) with ambitions to become a jockey. He was the right stature, short and under 100 lbs. He loved horse racing but there were obstacles he could never overcome.

“I had two problems, he explained. “When they put me on a horse, I kept falling off, and I had a deadly fear of horses.”

Instead Tim Conway attended Bowling Green State University where he studied programming and radio, served in the Army and got his start in show business on a Cleveland TV station.

His entertaining career capped with accolades including six Emmy Awards, a Golden Globe and inductions into The Comedy Hall of Fame and The Academy of Television Arts & Sciences’ Hall of Fame.

Conway loved making people laugh. He explained his job on the “Carol Burnett Show” as “making certain to break co-star, Harvey Korman”. He usually succeeded. Conway had a second passion, as dear as entertaining – he loved horse racing and handicapping. He often joked that when he was on tour, he made sure his tour manager schedule him in cities that had a racetrack.

“My wife is understanding,” he once told an interviewer. “When I come home and say I ate a $380 hotdog, she knows exactly what I mean.”

For a short time, Conway even owned a few horses. His silks heralded in the racing community for their 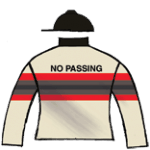 unique design which featured a message on the back “No Passing”. Conway explained that his silks were ineffective because his horses always came in last, so no one ever actually read the message.

Conway’s interest in racing went beyond betting. In 1987, he founded the Don MacBeth Memorial Jockey Fund with Chris and Judy McCarran which provided financial aid and assistance to injured jockeys and exercise riders. During its years of operation, the fund helped more than 2000 track workers in need. 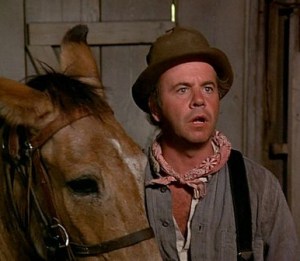 Rango (1967) TV sitcom on ABC. Conway was given the leading role in the short-lived Western sitcom playing an inept Texas Ranger assigned to the quietest post to keep him from creating problems – all for naught.

The Long Shot (1986). Conway wrote and starred in this tale of four friends who enjoy betting on horses at the track. The hilarity ensues when they learn that one of the trainer’s has a trick to get his horse to run faster only to learn later that it was a rues.

Horsing Around with Johnny (1986). Conway played his long-running character Lyle Dorf as a jockey interviewed on the Tonight Show with Johnny Carson. Clip below.