Tinker is a miniature horse but during the holidays he becomes a giant – a giant among the Salvation Army’s bell ringers. The adorable mini spends hours next to the red kettle ringing a red bell. According to Salvation Army Commander, Major Roger Ross, Tinker raises 10 times the amount of other bell ringers in the Milwaukee, Wisconsin area.

A few years ago, Tinker’s owner, Carol Takacs walked out of a store and was greeted by a Salvation Army bell ringer. That’s when the idea dawned on her. Takacs worked with Tinker for six months to train him to ring the bell.

“I called the Salvation Army and they welcomed us with open arms,” Takacs said. “Tinker has the mentality of baby Einstein. He’s very calm and placid. I had a little girl come up recently and put her hands on either side of his face and look at him in the eyes and just say ‘I love you.'” 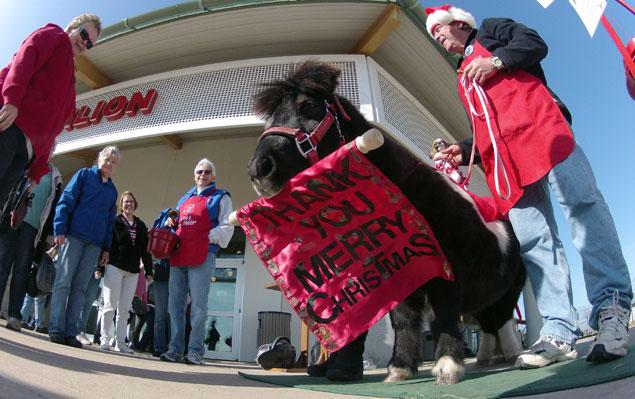 Tinker not only rings the bell with his mouth, he also bows to his donators and picks up a banner that says “Thank you Merry Christmas,” after passerby’s drop change into his kettle.

Tinker is only about 2.5 feet tall, and Takacs says “a lot of that is fuzz.” He is pampered from head to toe before he sets out for his bell ringing duties.

She said, “He gets a facial at first. He might get a hot bath and I’ll blow dry him right away. If he’s not really dirty I’ll vacuum him, then I’ll do his bangs kind of like The Beatles. Glitter hoof polish is applied. We add his bow on his back side. Then we put on his Santa hat and Salvation Army apron.”

On days when it’s not too chilly out, Tinker is joined by one of Takacs’ other “children,” Ta-lu-la, a 7-month-old Papillion puppy.

“People see Tinker and then they look up and they see her,” Takacs said. “They tell me, ‘You really do have a dog and pony show here.’ I can put her up on Tinker’s back side and she’ll just sit there and wait for people to come along.”

Tinker’s holiday antics certainly imbibe the holiday spirit. People are wooed by this diminutive fuzzy person and his clever tricks. He enjoys the attention and heartfelt affections from children. There is an honest and pure happiness awarded by a good hug from a cute, fuzzy mini. His endearing manner has made him quite the popular character in the Milwaukee, Wisconsin area.

When asked if Takacs will be bringing Tinker back next year, she quickly replied, “I will do this as long as Tinker can.”