The Struggle Is Real: Breaking In New Tall Boots

Written by Meagan DeLisle and reposted with permission from HorseNation.com.

Is there anything as beautiful in this world as a newly unboxed pair of tall boots? A few things might run a close race, but I was awestruck as I opened the lid of the box containing my gorgeous new Ariat Heritage Contours. The pristine new leather boots right before my eyes were definitely a work of art, but the more I admired my newest addition to my growing collection of show clothing, the more it dawned on me — not only was I the owner of a lovely new pair of boots, but if I wasn’t careful I would bear the blisters to prove it.
Breaking in new tall boots sparks a deep internal love/hate relationship. My last new pair of tall boots were my prized possession. I was so proud of them, in fact, that I naively wore them straight into the ring just a day later. Several soaking sessions of Shout and a few deep water washes later and the blood was finally out of my breeches.
Softening the leather of any product is a time-consuming task but it’s well worth the labor of love to avoid painful blisters and pinching while attempting to “ride through the pain.” So… what is the best way to break in your new tall boots? I’ll be the first to admit that there were a lot of theories I wasn’t bold enough to try, but I do have some semi-helpful hips with a hint of humor to help get you through the process.

Step One: Reach Out to Your Fellow Equestrians for Help
….and then be too chicken to try them. A quick post on Facebook left me with ENDLESS ideas for the brave of heart, several of which many of my friends swore by but with which I had a hard time following through.
The most popular suggestion was to put on the tall boots and the socks you would wear with them in the shower, allowing them to soak all the way through. At that point you were supposed to wear them around until they were completely dry. I could see the merit, but the mental struggle of submerging my new babies in water won against my bravery when it came to that plan.
Other popular suggestions included taking a washcloth dipped in warm olive oil and rubbing around the ankles and the back of the knee to help break the pinch points in, or to use a combination of water and alcohol (and I already asked — no, the alcohol is not for drinking), and to just ride a ton of horses!
I decided to go with a safer plan that included keeping my tall boots in the bathroom with me every time I showered. Instead of soaking them, I let the steam soften them up. I steamed them about five times prior to actually wearing them around to try and help ease the breaking in process. And what do you know — it actually helped. On day one, the boots could almost stand up on their own, but after a few times being steamed they were nice and supple and felt much more relaxed in the ankle. The steaming, however, didn’t help immensely with the back of the knee area, which was where I experience the most discomfort. 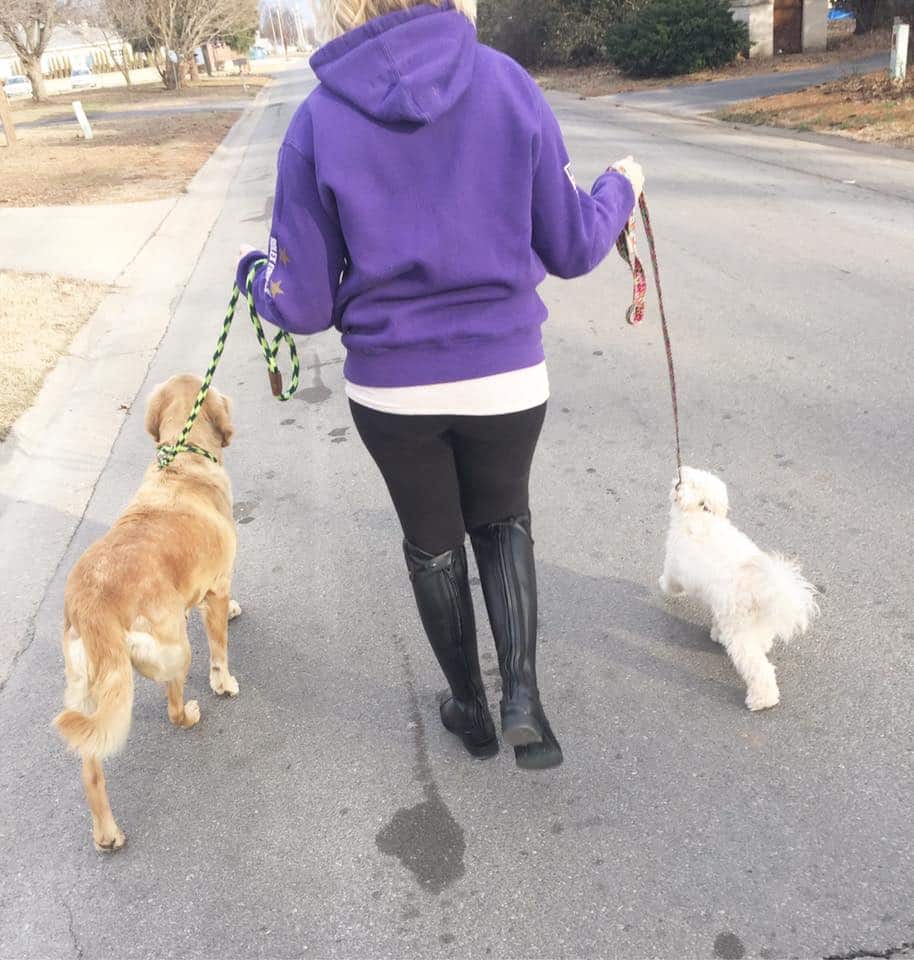 There is nothing better than walking through a tiny rodeo town in the bootheel of Missouri and wearing your new Ariat tall boots, only for people to ask where you go them from because they are “soooo cute.” Photo by Wayne DeLisle.

Step Two: Become One with the Boots
My boots became a staple in my daily life. Vacuuming? I was wearing the boots. Going to the grocery store? I zipped those bad boys up and strutted my stuff up and down the spice aisle. The best break-in practice that I incorporated in my daily routine was wearing my tall boots while walking the dogs. It gave me a good 30 minutes to an hour adjusting to the freshness of the leather and it allowed my boots to gain some bend in the back of the knee. Sure, my husband tormented me endlessly for it, but I could handle the jokes.

Rushing right in and riding in your boots while they are barely broken in can cause you to resent your new beauties, but with a little bit of homework breaking your boots in while you ride will be a lot more tolerable. I won’t promise it will be comfortable, but take it from someone with experience — hopping right on a horse with the boots fresh out of the box will hurt. Straight up hurt.

Step Three: Ride, Baby, Ride
After you have purchased all of the mink oil at your local farm store and given your boots a good once over, twice over… ten times over, then your best bet is to get on the horse and ride it out. Take your paddock boots and comfortable half chaps with you. If you feel blisters forming, don’t ride it out: stop and make the switch so that you can save the integrity of your breeches (blood is really hard to get out) and prevent yourself from developing nasty, painful blisters in some of the more sensitive spots on your legs and feet.
Never try and break your tall boots in for the first few times while at a show. You wouldn’t try a new training technique at a show; using new equipment or clothing can definitely put a kink in your riding. It will be hard for you to give your best if you are hurting. 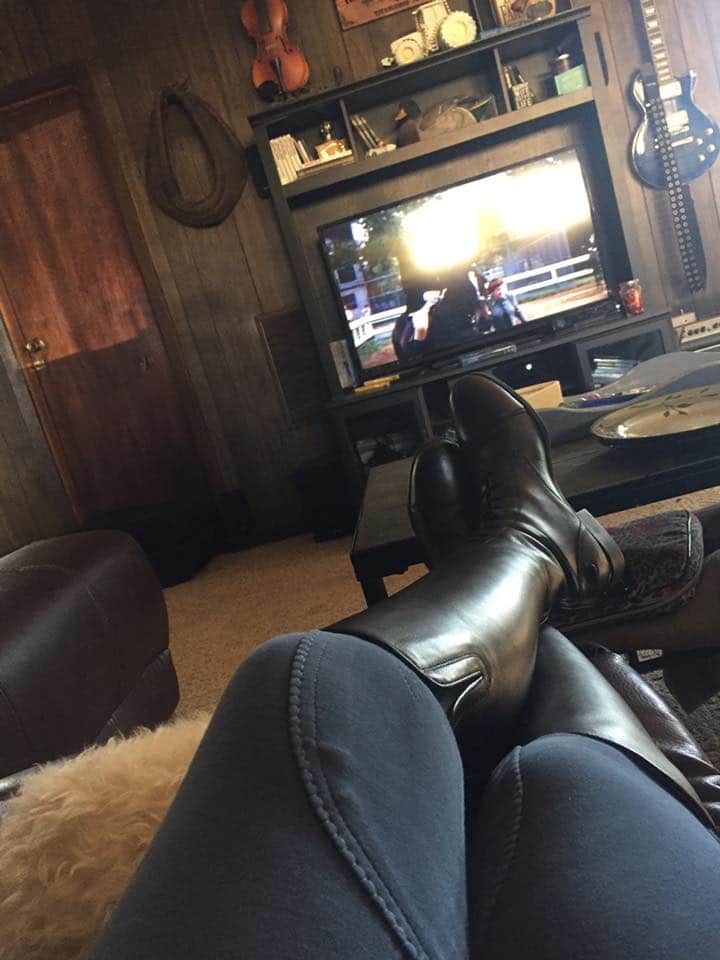 After a successful series of steamings and some trials in the ring, I proudly wore my new boots while watching Harry and Snowman on Netflix! My life is all horses, all the time. Photo by Meagan DeLisle.

If after a few weeks’ worth of rides you still aren’t comfortable in your new boots, it’s very possible there is a fit issue. Blisters on the balls of your ankles can show that your boots are too tight in that area; blisters in the soft spot of the back of your knee can show that even after your boots have relaxed a bit (and they will — tall boots typically lose almost an inch in height once the leather has softened) that they are still too tall. Heel lifts are a great option to try and adjust the fit without having to purchase new boots.
I always recommend purchasing new tall boots in a store where the staff are reliable and pride themselves on their customer service. Not every store will have enough boots in stock to have the exact fit you will need, but a professional can accurately measure you to ensure your height, width and shoe size are correct. If you are unable to make your way to a tack store for a one on one consultation, SmartPak lists the correct measurements for each part of the boot to show you just what size you need. Plus their friendly online and over the phone customer service are always happy to walk you through the process!
Buying new tall boots is an investment in your riding and showing career — make sure you are doing all you can to buy the right boots for you and ensuring that the breaking in process is as blister free as possible!