The Indelible Allure of Poitou Donkeys

What is it about horses that we love so much? Their beauty? Their strength? Their soulful eyes that know all our secrets? Of course, the answer is YES. Trying to explain our love of horses to others can be difficult. Perhaps the simplest explanation is that “it’s just something that happens.” 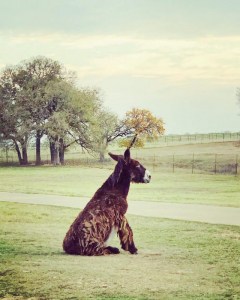 Such was the case for Patrick Archer of Grandview, Texas (USA). Patrick was always interested in animals, horses in particular. Twenty some years ago, Patrick and Chris Jones bought land south of Dallas/Fort Worth and began showing and breeding miniature donkeys. Over the years, they added a few exotics to their plate, breeding Fallow Deer, Spanish Goats and Dewlap Toulouse Geese. During a visit to a friend’s exotic breeding farm, Patrick spotted an animal in one of the pastures. “Stop the car!” he yelled.

He knew about them but never imagined meeting one. But there she was. A Poitou donkey standing in the field looking right back at him. It was love at first sight. Patrick left his friend’s farm later that day with her in tow. “The crazy whirlwind started that day,” he explained.

Her pet name was “Fifi,” appropriately French for any female Poitou as the breed originated in France. Fifi typified the breed’s unique characteristics. Larger than most donkeys, she stood nearly 15 hands. Her stature defined by a large head set atop a strong neck, long back, round haunches, large limbs and feet. And her most easily recognized, two most endearing features: long dreadlocks called “cadenettes” and those ears. Those enormous, fuzzy ears.

“Five minutes after meeting a Poitou, you realize this special animal deserves a place in this world,” said Patrick.

Soon after purchasing Fifi, Patrick and Chris determined they could do more to help this critically endangered species. They could breed Poitou. They traveled North America purchasing animals on the rare occasion they were for sale. Not an easy task considering that twenty years earlier there were only 80 Poitou in the world. A breeding pair purchased in Canada provided a solid base for Patrick and Chris’s breeding program. While finding enough animals to form a breeding population was difficult, that didn’t compare to the challenges they would face getting a surviving foal.

“There’s been a lot of heartbreak along the way,” explained Patrick.

A Poitou birth is challenged from the starting point. It is difficult for jennets to become pregnant, sometimes taking months to catch. The jennets are prone to miscarry early in their 14-month-long pregnancy. When they manage to carry full term even the joy of a live birth can be quickly dashed. Newborn foals may only survive their first few days. Through much trial and effort, and as Patrick is quick to add “a lot of help from my vet,” they discovered that giving the foal plasma within hours of birth significantly improved the chance for survival. 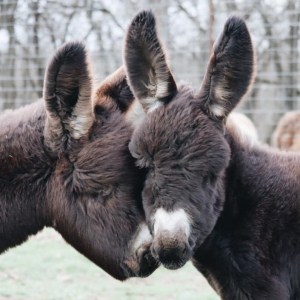 The new foals – Kenny and Lyra

When it comes to breeding Poitou knowledge is gold. This year, Patrick and Chris have already welcomed one foal and are expecting seven more. Names are assigned following the tradition established by the French Poitou Breed Association. Each year is assigned a letter of the alphabet with 2021 tagged with the letter “L.” Patrick’s first foal has been named “Lyra.”

Breeding a critically endangered species is a responsibility Patrick and Chris take to heart. Every pairing decision is made with consideration to species survival. With so few surviving animals, genetic expansion and exceptional conformation are key to each decision. Recognizing the genetic challenges facing the handful of Poitou breeders, in 2020, Patrick and Chris founded the U.S. Poitou Census in partnership with The Livestock Conservancy. The Census funds genetic research to identify pure and crossbred lines with the cooperation of zoos and private breeders in North America. The program funds genetic analysis performed at Texas A & M by Dr. Gus Cochran, a specialist in genetic research. This research aids breeders in making parenting decisions that will build diversity within the gene pool with the hope that the breed not only survives but thrives. Patrick and Chris hope to secure permission from the French Poitou Breed Association to start a U.S. Poitou Registry providing access to husbandry and management practices among breeders. The Livestock Conservancy’s data collection has identified about 70 pure Poitou animals in the U.S. and 500 worldwide. Approximately 100 animals with a very high percentage of pure genetic substance exist in the U.S. and nearly 2,500 worldwide.

“Every individual, purebred or nearly so, is genetically vital to the breed’s future,” explained Patrick. 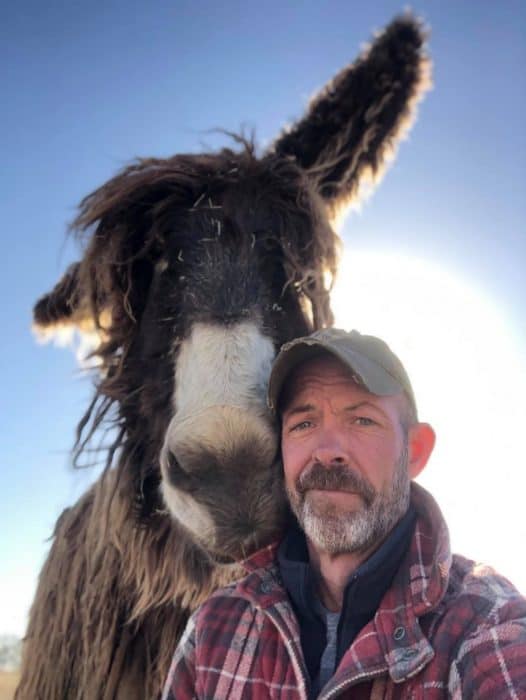 After only a few minutes talking with Patrick, you realize he is truly smitten with these beautiful creatures. He knows each animal intimately, Fifi, Ricola, Babette, Bertrand and Paqurette to name a few. When he talks about them, his voice rings with enthusiasm and joy. Few of us will ever meet a Poitou in person, fewer still will ever own one, so we asked Patrick to explain his captivation.

“Their temperament,” he stated without hesitation. “They are incredibly gentle and seek attention. They love to be loved on.”

In nearly two decades, Patrick has never seen his Poitou kick or bite. From birth they have an innate desire for human contact. “My vet is always surprised by a foal’s affection toward people,” he laughed. “They hit the ground and crawl into your lap.” Poitou never outgrow their desire for human contact. Within minutes entering one of Patrick’s pastures, visitors are encircled by Poitou standing quietly to acquaint themselves. Patrick said of his four jacks, “They are even more gentle than the jennets.” 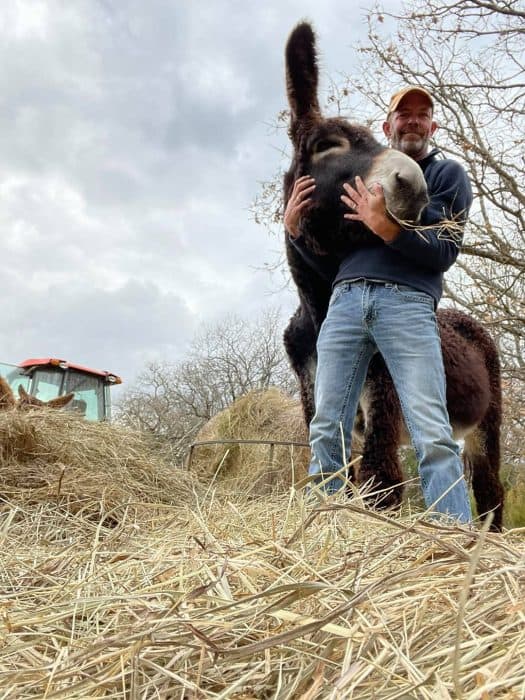 All work no play – Bertrand interrupts farm chores for a hug

Their donkey heritage makes Poitou fairly easy keepers. Patrick’s herd lives outside in pastures with run-ins. They have access to a trace mineral salt block and fresh water. In the winter, Patrick provides Coastal Bermuda hay. He does not feed grain. Patrick’s Poitou are barefoot needing only an occasional trim.

When it comes to those dreadlocks or “cadenettes,” Patrick acknowledges that they are exceptional to look at but unyielding to manage. Foals are born with a heavy coat that never sheds. As hair grows, it twists around new growth which over many years produces their unique long coiffe. While they look cool, Patrick explained that dreads come with disadvantages like hiding cuts or infections. Opting instead to focus on the animal instead of the hair, Patrick’s modus operandi may surprise some.

“The French would probably faint over this, but I shear my Poitou like sheep,” he laughed.

Late each spring, Patrick grabs his sheep shears and gives his herd full-body trims leaving cadenettes only on their legs for fly relief. Each animal produces a large plastic garbage bag worth of hair. Patrick has saved dozens of bags hoping someone will find use for the trimmings. Spinning has not proved successful — several have tried. Prior to spinning, the locks must be unwound and washed. Dirt within the twisted follicles is hard like concrete, damaging the fibers to the point they cannot be spun.

“I am ever hopeful someone can make good use of their hair,” he said. “I’d be happy to share if someone wants to try, maybe felting?”

Other than standing around looking good, Poitou don’t offer much value as working animals. Jacks were prized for centuries in France for siring “the finest working mules in the world” according to the French Poitou Studbook founded in 1884. Poitou jacks were bred with Mulassiere draft mares. Their offspring were strong, well-minded, large-framed mules suited for farm work and transportation of goods. Breeders commanded and received top dollar for these mule crosses. During the mid 1800’s, more than 15,000 crosses were bred and sold annually. 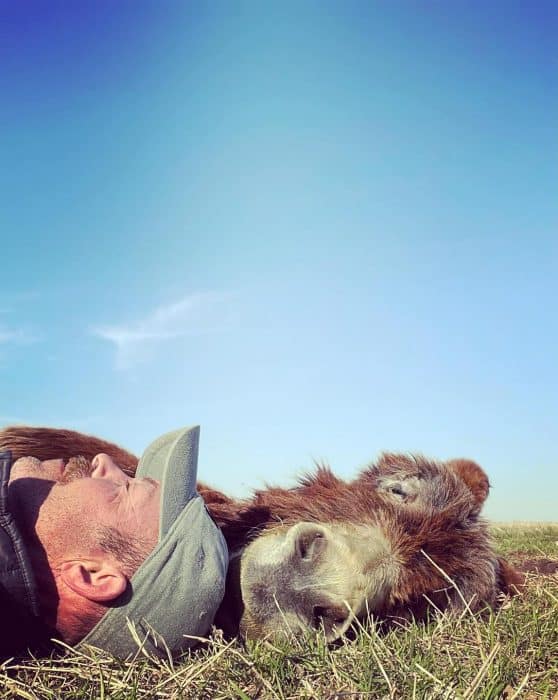 Shhhhh – Patrick and Giroflee catching z’s in the Texas sun

As far as pure Poitou’s work ethics, Patrick explained “They’re not in a hurry to go anywhere anytime soon.” They are suited for light driving but not riding or packing as their long backs are prone to injury from weight atop. When asked about Poitou as effective pasture guards, Patrick said “They’re terrible.” His two stallions love his Anatolian dogs. On more than one occasion, he has caught the stallions and dogs napping together in a snuggled-up pile.

“If they see a coyote they might take notice but doing something about it requires too much effort,” he laughed. “They just don’t care enough.”

Their unique look, gentle disposition and intelligence are traits every horse person desires. Patrick is clearly smitten with Poitou as anyone who meets one would be inclined. But acquiring a Poitou is not easy. The few individuals with Poitou are as focused as Patrick and Chris to securing their future. Today, sales are typically between private breeders and zoos, like-minded in their conservancy efforts. With approximately 200 Poitou in North America (several thousand worldwide), owners understand that each animal is an important player. On occasion one might find available a gelded jack for sale or a jennet retired from breeding. Even so applicants may expect a vigorous vetting process before a sale is finalized. Patrick acknowledges that opportunities to own Poitou today are limited but hopes that is a temporary state.

“With the census analysis and collaborative breeding programs, we hope to make Poitou more easily accessible within the decade,” he said. “Science has been invaluable in building the population to today’s numbers, but we still have more to do.”

Genetic analysis has been employed for several years as today’s breeders look toward other science-based means including artificial insemination, utilization of frozen sperm from deceased jacks and surrogacy. Poitou face a mountain of hurdles to survive, but their chances improve steadily thanks to dedicated conservators like Patrick who humbly summed up his dedication …

“They are special creatures deserving of every chance we can give them.”

Today Patrick Archer and Chris Jones own Texas Poitou Donkeys and generously support The Livestock Conservancy Census. The Archer/Jones Poitou Donkey American Census will develop an accurate list of Poitou donkeys in the U.S. based on genetic analysis. The census results will provide Poitou breeders with a reliable resource regarding Poitou husbandry and translate the French Poitou Breed Associations’ standards from French to English.

Kenny was born December 31, 2020 just under the naming wire. Otherwise we would be posting about Lenny.

Quixote is more than happy to demonstrate!