She was born in St. Louis, Missouri in 1885 to Colonel Zack and Agnes Mulhall. Four years later the family moved to the Oklahoma territory on a 160-acre ranch. The family grew to include 4 boys and 4 girls and the ranch expanded to 80,000 acres. Colonel Zack was a rascal, today his exploits would have been front page tabloid fodder, but back then it was Lucille who had the public’s eye.

Lucille wasn’t interested in dolls, sewing or piano lessons. She preferred being outdoors riding horses and working on the ranch. Colonel Zack once claimed that when his daughter was only thirteen he told her she could keep as many of his steers as she could rope in one day. He bragged, “She didn’t quit until catching more than three-hundred head!” 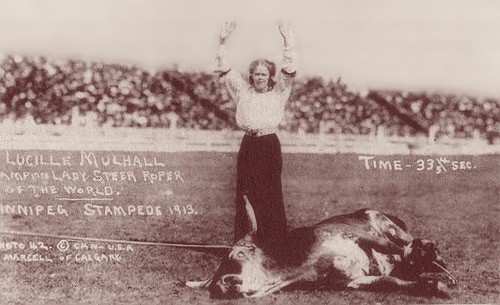 Lucille and her sister Bossie went to Catholic boarding school in nearby Guthrie. The mayor of Guthrie asked Zack to allow them to entertain visiting dignitaries with exhibits in western skills. Visitors were spellbound by their riding, roping and shooting talents.

While campaigning in Oklahoma as a vice presidential candidate in 1900, Teddy Roosevelt saw Lucille perform. It was the Fourth of July, and she roped in front of a large crowd at a “Cowboy Tournament” in Oklahoma City.

The Daily Oklahoman reported, “Roosevelt was most enchanted with the daring feats of Lucille Mulhall. She rode beautifully throughout the contest and lassoed the wildest steer in the field.”

Impressed by Lucille’s skills Roosevelt invited the Mulhalls to join him and a select group of the Rough Riders for a private dinner. That night Lucille gave the hero of San Juan Hill a silk scarf she had worn during the contest.

Zack Mulhall then invited Roosevelt to stay at his ranch—Teddy accepted. During the visit, Roosevelt went riding with Lucille and they spotted a grey wolf. This whetted Roosevelt’s appetite for a hunt. The wolf eluded them that day but Roosevelt told Lucille if she could catch the wolf, he would invite her to his inaugural parade.

Some claim she later roped the wolf, then killed it, others say she shot it at five-hundred yards. But by all accounts, she sent the pelt Roosevelt who displayed it in the White House after he and McKinley won the election. Lucille and family attended the inauguration and Roosevelt reportedly gave her a saddle and an 1873 Winchester.

Appreciating Lucille’s skills with a horse, rope and gun on the ranch, Roosevelt encouraged her father to get her more exposure. “Zack, before that girl dies or gets married or cuts up some other caper,” Roosevelt reportedly said, “you ought to put her on stage and let the world see what she can do.” The rest, as they say, is history.

In 1905 Colonel Zack started a wild west show, “Mulhall’s Congress of Rough Riders and Ropers”. Early movie cowboys, Tom Mix and Will Rogers got their start in the show but Lucille was the hands-down star.

Feminine, soft spoken, and well educated, she seemed a paradox. This delicately featured blonde was tanned and muscled beating strong men at their own games. As a woman she was a novelty and made use of her talents in one of the only ways available for women, in show business. In 1905 she dazzled Easterners in her first appearance at Madison Square Garden.

“Slight of figure, refined and neat in appearance, attired in a becoming riding habit for hard riding, wearing a picturesque Mexican sombrero and holding in one hand a lariat of the finest cowhide, Lucille Mulhall comes forward to show what an eighteen-year-old girl can do in roping steers. In three minutes and thirty-six seconds, she lassoed and tied three steers. The veteran cowboys did their best to beat it, but their best was several seconds slower than the girl’s record-breaking time… The cowboys and plainsmen who were gathered in large numbers to witness the contest broke into tremendous applause when the championship gold medal was awarded to the slight, pale-faced girl.”  Wrote a New York reporter.

It has been said that she had a natural connection with horses. She claimed her horse, Governor, knew many tricks.

Lucille said, “My system of training consists of three things: patience, perseverance, and gentleness. Gentleness I consider one of the greatest factors in successful training. Governor, the horse I ride in our exhibitions has nearly forty tricks. He can shoot a gun; pull off a man’s coat and put it on again; can roll a barrel; can walk up stairs and down again—a difficult feat; is perfect in the march and the Spanish trot; extends the forelegs so that an easy mount may be made; kneels, lies down and sits up; indeed, he does nearly everything but talk.”

Lucille travelled the world entertaining crowds with her roping skills and natural talents riding horses. She was genuine and generous and the crowds loved her. Newspapers tagged her with flourished titles like “Daring Beauty of the Plains, “Female Conqueror of Beef and Horn” and “Lassoer in Lingerie” and “Deadshot Girl.” Finally, one reporter coined a suitable phrase, Lucille Mulhill was a “Cowgirl”.

Lucille retired in 1917 as live Wild West shows were being overshadowed by film. She continued occasional performances through the 30s, mostly in Oklahoma and Texas. She made her last known public appearance in September of 1940. Lucille Mulhall died a mile from the family ranch in an automobile accident on December 21, 1940. She was only fifty-five years old. She was posthumously inducted into the Rodeo Hall of Fame in 1975 and National Cowgirl Hall of Fame in 1977.