Unless you’ve studied a bit of art history you’ve probably never heard of him but he was a successful artist during his lifetime who continues to make an impression half a millennial after his death.

Albrecht Durer was a German artist of the late 15th, early 16th centuries. Through his paintings and prints, Durer became a highly influential artist across Europe. His surviving diaries and letters detail Durer’s interest in executing images based on new understandings of perspective, anatomy and proportion.

His body of work includes drawings, paintings but his greatest legacy was his work in printmaking, particularly engravings. Two engravings, “The Small Horse” and its companion piece “The Large Horse” produced in 1505 may best represent his interpretation of the horse. Many Renaissance artists portrayed horses as symbols of virility and violence instead, Durer’s work exemplified the natural, physical qualities of the horse. 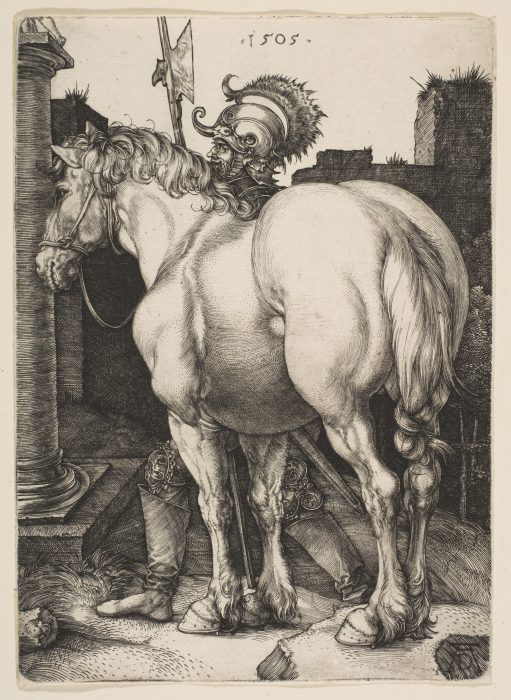 “Knight, Death and the Devil” (1513) is an incredibly complex design incorporating iconography and cultural symbols.

Knight Death and the Devil

The piece features an armoured knight, accompanied by his dog, rides through a narrow gorge flanked by a goat-headed devil and the figure of death riding a pale horse. Death’s rotting corpse holds an hourglass, a reminder of the shortness of life. The rider moves through the scene looking away from the creatures lurking around him, and appears almost contemptuous of the threats, and is thus often seen as symbol of courage; the knight’s armor, the horse which towers in size over the beasts, the oak leaves and the fortress on the mountaintop are symbolic of the resilience of faith, while the knight’s plight may represent Christians’ earthly journey towards the Kingdom of Heaven.

Durer’s equestrian art depicts the horse more naturally than most of his artistic predecessors. Whether the piece was a study inspired by his own imagination or a commission from a wealthy patron, his horses are magnificently portrayed. And fortunately many survive that we may still enjoy them today.

Tap any image in the carousel below to increase the size.

Interested in seeing more horses featured in works of art? Visit WARHorse’s “Arts & Culture” page for a collection curated just for you.