The Beatles Many Encounters with Horses

From Central Park to Aintree Racetree to Missouri’s Ozarks, the Beatles often found themselves in the company of horses giving teenage girls yet one more reason to LOVE the Beatles.

It was the day the Beatles arrived in America. They just scored their first number 1 U.S. hit with “I Want to Hold Your Hand”. Arriving at New York’s Kennedy Airport, the Beatles disembarked to 3000 screaming fans. The following day the Beatles took a carriage ride in Central Park. George missed the outing, staying at the hotel to nurse a sore throat. February 9th, the Beatles made their first appearance on the Ed Sullivan Show. More than 73 million people (40% of the U.S. population) tuned in to watch. Before the week’s end, the Beatles performed their first live concert at the Coliseum in Washington, D.C. in front of 20,000 fans.

Another momentous February 7 for the Beatles as they finished a two-day shoot for the short film Penny Lane which included riding horses and walking around Angel Lane in Stratford, London and Knole Park in Sevenoaks, Kent. Filming may have wrapped earlier except for a wardrobe delay –  the red hunting jackets worn by the group were not delivered as promised and someone was sent to a nearby town to pick them up. This film was one of the first examples of what would later become known as a “music video”. Directed by Peter Goldmann, it was selected by New York’s MoMA as one of the most influential promotional music films of the late 1960s.

Paul McCartney bought a racehorse named Drake’s Drum for his father Jim in celebration of his 62nd birthday. Drake’s Drum greatest accomplishment came at Liverpool’s Aintree Racecourse when he won the Hylton Plate, the race that preceded the Grand National. Both Paul and his father were there to cheer the win. Drake’s Drum was retired to McCartney’s High Park Farm in Scotland.

Founded by George Harrison, the label gave Harrison a venue to support other musicians as well as his solo career. 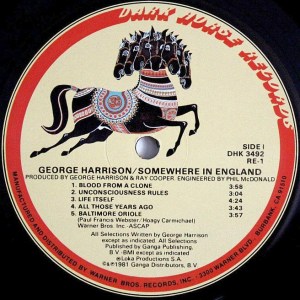