The name itself conjures horrific images that are not far off the mark. “Swamp Cancer” has made a deadly impression upon the 150 wild ponies of Chincoteague Island. Seven infected ponies were recently humanely euthanized; Shadow, Lightning, Calceti’n, Elusive Star, Essie, RainDancer and Lyra.

“Swamp Cancer” is not cancer but an infection caused by a parasitic organism that moves through water seeking to invade other plants and animals. The organism enters the body through a small cut or wound developing pythiosis a condition identified by fungus-like growth. Infection is difficult to identify at the onset initially appearing as a mild irritation like a bug bite. Within days the entry point deteriorates becoming notably red and itchy with evidence of granulated and dead tissue. As growth advances, the body reacts strongly causing cellular death in the form of yellow or grey pea sized bodies oozing from the area. Without treatment growth will erode ligaments, tendons, even bone leading to death in most cases within 6 months.

The infection is most commonly seen in horses but also infects dogs, cats even humans who walk or stand in infected water with a cut or abrasion through which the opportunistic organism may enter. Researchers are confident that the infection does not spread from animal to animal nor can an infected animal contaminate its environment. Exposure does not automatically equate to infection which is statistically uncommon. Studies on dogs identified the infecting organism within their body but their immunization system prohibited development of the tumor like growth suggesting that bacterial presence does not necessarily equate to infection.

The infected ponies on Chincoteague Island were removed from the herd and aggressively treated including surgical removal of infected tissue and immunotherapy.

“They received the very best care,” Denise Bowden, spokes person for the Chincoteague Volunteer Fire Department said. “They just couldn’t fight this off.”

In 2016 a mare in early stages was successfully treated as was another pony in 2018. The number of ponies infected annually has dramatically increased in recent years. The Chincoteague Volunteer Fire Department which oversees the pony herd is working with the Chincoteague Wildlife Refuge to identify ways to mitigate infection by clearing away storm debris particularly down barbed wire. An experimental vaccine has shown positive results with early diagnosis and is expected to receive FDA approval in 2019.

Chincoteague pony breeders recently donated 3 adult mares to boost the island’s herd population. Oreo, Star and Treasure are genetically Chincoteague ponies but were bred and born elsewhere. They will be transitioned into the wild herd in 2019. 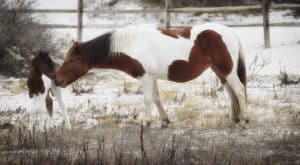 The first new foal of 2019 was born to Susi Sole in early January on neighboring Assateague Island. It is Susi’s first foal, believed to be a filly. She doesn’t have a name yet but has been assigned an identifiction number, N2BHS-MR. The Assateague Island Alliance holds an annual auction giving top bidders the opportunity to name the year’s foals.