She was owned and bred by Francis Morris of New York, foaled on Morris’s farm in Throgg’s Neck, New York. Her sire, Eclipse, and dam, Barbarity, were both imported. Morris bred the pair repeatedly producing several colts who accomplished little on the track but several award winning fillies. Track folks referred to the group of daughters as the “Barbarous Battalion” individually named Remoreseless, Relentless, Regardless, Merciless and Ruthless.

As a two-year old, Ruthless won the inaugural running of he Nursery Handicap, 1866, by six lengths. She carried 97 pounds for the 1-mile race and won $2,450. The New York Times commented that she finished the race “galloping along as she was at exercise”. 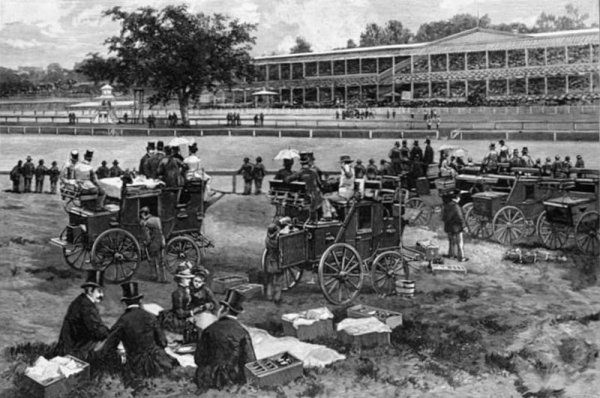 Painting of he 1867 Belmont Stakes venue

Morris entered both of his horses in the Belmont Stakes. Monday and Ruthless pitted against a field of seven. By race time, only four horses started, the others forfeited the race rather than face Morris’s renown speed horses. The plan was for Ruthless to wear down the speedy colt De Courcey then concede allowing Monday the win. But Monday never challenged and Ruthless dug in winning by a “short neck” over De Courcey, Rivoli placed third and Monday dead last.

Ruthless won the first Belmont Stakes and went on to accomplish even more. When she retired from racing she docked 11 starts, 7 firsts and 4 seconds. Her career earnings totaled $11,000.

Ruthless went back to the Morris farm and passed along her winning genes to her offspring including stakes-winning colt, Battle Axe, who won the Kentucky Derby in 1873. Her death at age 12 is certainly one of the strangest of any prominent Thoroughbred. While grazing in her paddock, a passing hunter shot her by mistake.

Her racing achievements were widely heralded at the time and not forgotten after her death. The Ruthless Stakes was named for her. It is run annually at Aqueduct, the race is for three-year-old fillies at a distance of six furlongs. The race began in 1974 and currently offers a $100,000 purse. The 2017 winner was Yorkiepoo Princess.

In 1975 Ruthless was inducted into the National Museum of Racing and Hall of Fame.

Tomorrow, June 10, is the 149th running of the Belmont Stakes. Only 3 fillies have ever won the race; Ruthless in 1867, Tanya in 1905 and Rags to Riches in 2007. This year’s race includes a 12 horse field comprised only of colts. Patch the one-eyed thoroughbred who raced in the Derby returns but Derby winner Always Dreaming and Preakness winner Cloud Computing are not.