She was Stuck In the Mud for a Very Long Time

She is a wee little thing, about the size of a fox. She lives in North American near what is known today as Wyoming. She is Eohippus, the dawn horse, the primitive horse of the early Eocene era 52 million years ago.

There is little ice on the planet. Globally the temperature is even and moderate from the equator to both poles. Earth is embraced by enormous lakes and endless forests. Ferns, palm trees, sycamores and giant redwoods abound. Below the dense canopy the forests are balmy, the ground is soft and damp.

Eohippus is well designed to travel the forest undergrowth. Her head and neck are short. Her limbs are long relative to her body. Her back has a slight springy arch, ideal for ambling over fallen limbs. Her feet are comprised of 5 toes though one has already evolved off the ground. The tips of each toe are capped with small hooves. Her feet are padded like a modern dog allowing her to traverse quietly through the leaves and branches. Her days are spent scampering among the greenery eating soft foliage and fruit.

The dinosaurs are gone. Mammals now roam earth comprised of mostly smaller species, rodents and birds, though it’s also the time when rhinos and elephants emerge. For 20 million years there are few evolutionary changes for little Eohippus.

Then, very slowly the Earth begins to change. The continents break and drift apart. In North America the mountain ranges begin to uplift. In the center of the continents the climate becomes dryer. Lakes dry, their once muddy bottoms eventually form rock. The forests give way to grassy plains. Seasons become more evident and ice begins to form at the poles. Life reacts to these changes and Eohippus is gone. She has adapted to nature’s whims evolving into the next species of early horse.

In 2015 brothers Mark and Mike Oliver are digging fossils near Lake Kemmerer in Wyoming. They are collecting ancient fish fossils hoping to find a nice specimen to sell. Unexpectedly they unearth a small talus bone. Fish fossils are common in the area but a talus bone was unusual. They sought assistance from local experts and after careful hours of extrication, they found her. It is Eohippus. 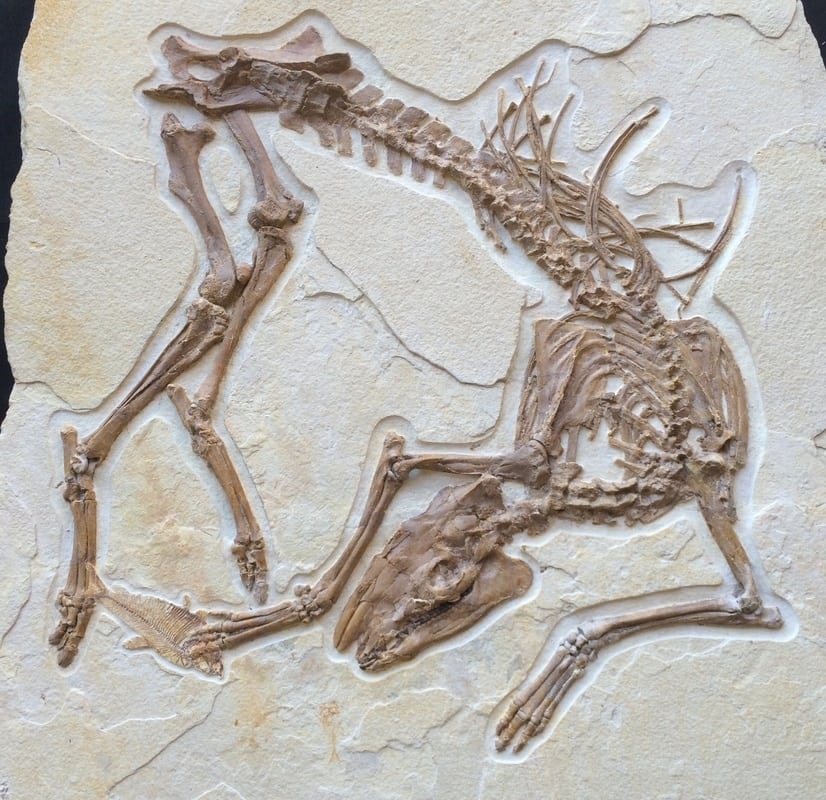 They named her “Olive”. She drowned in the ancient lake, buried in the fine grain sediment. As the Rocky Mountains began to uplift and the climate became dryer, the lake dried. The mud encasing Olive baked in the sun for millions of years preserving her skeleton until the Oliver brothers found her.

Most fossils are found as disparate pieces to be reassembled, Olive was preserved in articulation, fully intact save a small piece of missing pelvis. She is one of only a handful of any ancient species found in tact. Common and unremarkable during her lifetime, Olive is a treasure today and the find of a lifetime for two archeologist brothers.