Have you ever done something then come to regret it? You had that gut feeling but reasoned yourself out of it? Maybe you considered buying a horse then didn’t? Maybe you sold your horse and wish you hadn’t? That’s what happened in 2010 to Phyllis Wyeth when she sold one of her yearlings and immediately regretted it.

Phyllis Mills Wyeth, daughter of Alice du Pont and James P. Mills, was raised around horses. Her great grandfather purchased a farm on the Pennsylvania-Delaware border in 1903, Point Lookout Farm. Four generations of du Pont’s have lived on the rolling estate building a legacy of racing thoroughbreds.

As a young woman, Wyeth rode horses in steeplechase racing, jumping fences and ditches. During her college years, she majored in political science and worked for then-U.S. Sen. John F. Kennedy and later in the White House as a secretary to the president’s special assistant.

Her life changed dramatically in 1962 at age 20. A car trying to pass a truck hit her head-on.  She felt an electric shock run through her body. “I’ve broken my neck,” she told the men who came in the ambulance. Wyeth was correct, she had a broken neck and was paralyzed from the waist down. Wyeth did not allow her handicap slow her down. Friends quip, “she is all systems go, all the time.

No longer able to ride, Wyeth earned respect as a competitive driver. But breeding thoroughbreds runs in her blood and has been one of life’s mainstay. In 2009 a particular colt was born on Wyeth’s farm, a big bay with a long white blaze and three stockings – Union Rags. 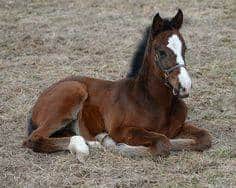 Juan Martinez was chief horseman at Point Lookout Farm. He and Union Rags developed a special bond when the horse was a weanling.

“I would play with him all the time, even slept with him in the stall,” Martinez related. “I would hop on him on my belly (draped over the weanling’s back) and ride him around the barn. He was very calm and quiet all the time.  I gave him love and trust and we became great friends. He did everything so easy.”

“Juan even rode him in from the field before he was broken,” Wyeth remembered. “He was easy to handle. He was a wonderful horse to be around. Any kid could come right up to him.”

Despite her adoration for the young colt, on the advice of her accountant Wyeth sent Union Rags to the Saratoga Yearling Sale in August 2010 where IEAH Stables purchased him for $145,600.

“My accountant told me to sell him,” lamented Wyeth.  “It was for tax purposes to show I was running a business, not just a hobby.  I didn’t like it. I didn’t want to do it.”

Wyeth suffered seller’s remorse.  When Union Rags showed up at the two-year old in training sale at Palm Meadows, Florida, Wyeth dispatched a friend to the sale with these instructions, “Just get him.” Without hesitation, Wyeth paid his $390,000 price tag. Why was Wyeth so intent on getting Union Rags back? He was “family”.

After death of her mother, Wyeth retained the broodmare Tempo, who on March 3, 2009 gave birth to Union Rags. A daughter of the influential stallion Gone West that her parents raced, Tempo’s first five foals were all winners at the track.

During the birth of Tempo’s seventh foal in 2007 the mare began hemorrhaging and they almost lost her. She was not bred the following year. Union Rags turned out to be Tempo’s eighth and final foal when she was retired from broodmare duty.

“I bought Union Rags back for three times the amount I sold him for, not your conventional business strategy,” said Wyeth with a chuckle. “But it didn’t matter. I realized I couldn’t get another foal from this mare. I kept having this premonition about him. I said, ‘Phyllis, this is the best of my mother’s breeding program. I don’t care about the money. I’ve got to have this horse back.’”

And her decision, it turns out was a good one.

In 2012, Union Rags won the third leg of the Triple Crown, the Belmont, taking the lead just before the finish line. Injured the next month, the Belmont was his last race. During his racing career he earned nearly 1.8 million with 5 wins in 8 starts.

At age 66, Phyllis Wyeth was able to reconcile her decision to buy back the horse she didn’t want to sell in the first place. Perhaps destiny allowed her to then achieve the pinnacle of her family’s heritage – to breed a thoroughbred champion. Sometimes you just know when its right, you don’t need anything more than that. Its just right.

Where is Union Rags today?

Union Rags is still owned by Phyllis Wyeth and stands stud at Lane’s End Farm like his sire and grandsire before him. He lives in the main stallion barn with 2003 Horse of the Year, Mineshaft, and fellow Belmont Stakes winner, A.P. Indy.

“We are thrilled that Phyllis Wyeth has chosen to stand Union Rags at Lane’s End,” William Farish, the owner of Lane’s End, said in a press release. “He has all the makings of a top stallion. He was a brilliant racehorse with outstanding conformation, and he has an exceptional pedigree.”

During his first year at stud, Union Rags bred 137 mares for 106 foals. As of this post only two of the 2014, 2-year olds have raced and raced impressively;

Wyeth died January 14, 2019. Wyeth was an advocate for the arts and disabled persons working as a consultant, chairperson and serving on many museum and preservation boards. In addition to her success breeding Thoroughbreds, Wyeth was an accomplished carriage driver. She was married to artist, Jamie Wyeth who preceded her in death.