Secretariat’s Progeny and 30 YO Daughter

I enjoy the occasional story that pops up on the internet when someone discovers they have a son or daughter of Secretariat. Big Red was born today, March 30, 1970 out of Bold Ruler and Somethingroyal.

Retired from his phenomenal racing career, Big Red was sent to stud at Claiborne Farm. His sperm showed signs of immaturity so he was first bred to 3 non-Thoroughbred mares to test his fertility. An Appaloosa named Leola produced Secretariat’s first foal in November 1974. The foal, named First Secretary, was chestnut and spotted like his dam.

Secretariat’s first thoroughbred crop was born in 1975, 28 foals including Canadian Bound who became the first yearling to break the $1 million selling price. He went for $1.5 million at the 1976 Keeneland July sale. Unfortunately, Canadian Bound was a terrible race horse as were many of the early foals.

But over the years Secretariat’s genes produced a number of successful offspring. Of 663 named foals, 341 won at the track and 54 became stakes winners. Secretariat never produced a male offspring to carry on as a leading sire, but his daughters more than took up the slack. In 1992 Secretariat became the leading broodmare sire in North America, his daughters producing 24 Grade/Group 1 winners.

Recently one of Secretariat’s daughters surfaced. At 30 years old, Trusted Company, is retired in New Jersey. As a yearling the chestnut mare sold at the Keeneland July sale for $52,000. She raced once as a 4-year-old finishing 10th in a field of 12. Showing no enthusiasm for the sport, she was retired for breeding. Over the years she gave birth to 21 foals. 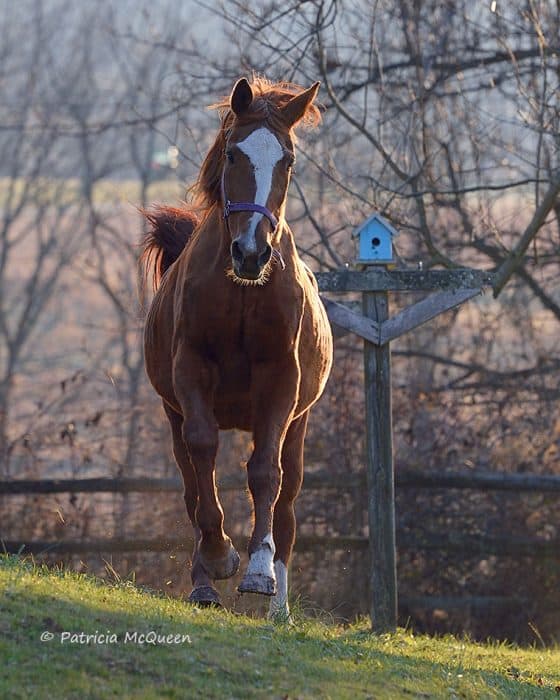 Her second owner retired Trusted Company from breeding but wanted to keep the mare with the family. She was sent to a niece in New Jersey and lived with a pony whom she guarded from the other horses like a baby.

When the niece was forced to sell her farm and horses a passing acquaintance who works as a local animal welfare advocate, stepped in to care for Trusted Company. She now lives with several horses, a pony and donkey and has settled into quiet retirement. 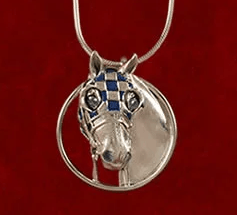 Commemorate Secretariat’s Birthday with your own Secretariat Sterling Silver Pendant by Jane Heart Jewelry. Available through our own WARHorses’ SHOP.