Emma “Pee Wee” Burge Ott was born in 1919 in Giswil, Switzerland. At the age of 9 her family immigrated to the United States. Arriving at Ellis Island, the family established roots in California. Emma’s parents worked at a dairy farm. Emma began riding the calves and as a teenager she was hired to ride steers in an exhibition.

Three years later Emma had become a force to reckon with on the rodeo circuit. Initially she roped steers competitively but in short order she added trick riding, bronc riding, relay and flat races to her rodeo repertoire. She competed in many of the largest rodeos of the time including the Reno Rodeo, the Pendleton Round up and the Calgary Stampede. 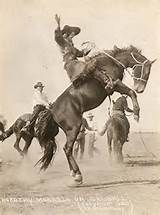 Emma was petite, 5 feet tall and weighed less than 100 pounds, earning her the nick name “Pee Wee”. She may have been short in stature but she was long in talent and charisma. In August 1946 she was the star of the 65th annual Elgin Stampede. She wowed the crowds doing shoulder stands on her galloping pony and competing in bronc riding atop three of the roughest horses at the rodeo. Her daily performances “kept the crowd on the edge of their seats,” according to the Aug. 29, 1946, edition of the Elgin Recorder.

But Emma had more on her mind than rodeos. She retired at the age of 27 to marry and raise four daughters. Later she attended college and became a license vocational nurse in her 50’s.  Emma “Pee Wee” Burge died in 2011 at the age of 91. In 2012 she was posthumously inducted into the Oakdale Cowboy Museum, California. Her daughters and granddaughters accepted the award in her honor.

Postscript
Emma Burge was an accomplished rodeo performer, of that there is no doubt. Her achievements take on a remarkable aspect when you consider the time when she competed.

During the 1930’s women worked but their wages were low, half what a man was paid for the same work. World War II did little to challenge gender stereotypes. More women were recruited to the workforce but their employment came with the understanding that their position was temporary, for the war effort, as women filled the shoes of men called to war. During this period, Emma Burge was a paid rodeo performer, employed in a man’s world, a tough and rough world. She was capable, she was talented and she worked on her own terms. Respect.