Remembrance Sunday is a memorial day observed in the Commonwealth of Nations. The day ensures that no one will be forgotten; military and civilian, men and women even horses who suffered or died during the two World Wars and later conflicts. Wreaths of remembrance poppies are laid upon memorials, muffled church bells ring across the countryside and 2 minutes of silence is held at 11 a.m. in honor of the signing of the Armistice.

The number of people killed during the two World Wars ranges from 60-105 million people. Statistics suggest that approximately 10 million horses and mules perished. Memorial days, parks and statues provide us with venues to remember and pay respect.  In 2015 an equestrian statue was unveiled in Romsey, Hampshire, UK at the War Memorial Park. The statue commemorates the bravery and sacrifice of horses and recognizes the city’s role in providing war horses for the first World War.

Although the Army of 1914-18 was equipped with motorized transport, horses were still the most effective way to move artillery and equipment on unpaved roads and through the cloying mud of Flanders and Northern France.

In 1915 an expansive Remount Camp was opened on the outskirts of Romsey. The camp procured and trained horses and mules for service at the front. In less than 3 years the facility supplied more than 120,000 horses to the British Army.

The Remount Service, of which the Romsey facility was operated, bought 468,000 horses in the UK. These horses comprised 17% of the country’s equine working population. But that was not enough, the Service bought nearly 689,000 horses from North America. The Atlantic crossing took several weeks, more than 13,000 were lost at sea before they reached Britain.

Many of the American horses were unbroken. They landed at Devonport and were transported by train to Romsey, where they were met by men from the depot and led through the town center to the hilltop camp. After a few more weeks of basic training, the horses were sent to the front. Conditions were brutal, horses were killed during battles, others suffered from the harsh conditions, lack of forage and disease. After the war the Romsey Camp was abandoned and later dismantled. The site is now farmland.

In 2013 the Romsey War Horse Project was initiated to raise funds to construct a statue in the town’s Memorial Park. L55,000 were raised and the project award to local sculpture Amy Goodman. In 2015 the statue was unveiled marking the 100th anniversary of the Romsey Remount Camp. The life-size, bronze figures are of a soldier with a broken arm, holding out his other arm to his horse.

“I wish to convey the powerful bond between horse and soldier, despite their hardship through war.” Said Goodman.

The plinth of the statue contains four horseshoes from the battlefields of Flanders, a Remount Service cap badge and two terracotta WARHorses made by local school children.

Historian, Phoebe Merrick, one of the moving spirits behind the project, said: “I don’t know of a similar statue elsewhere. It’s particularly apt because of Romsey’s associations with the remount depot.”

Goodman sculpted the forms in clay that was then cast in bronze. One of the horses she used as a model is named Chips. The statue won best sculpture award at the 2013 Society of Equestrian Artists’ Exhibition. 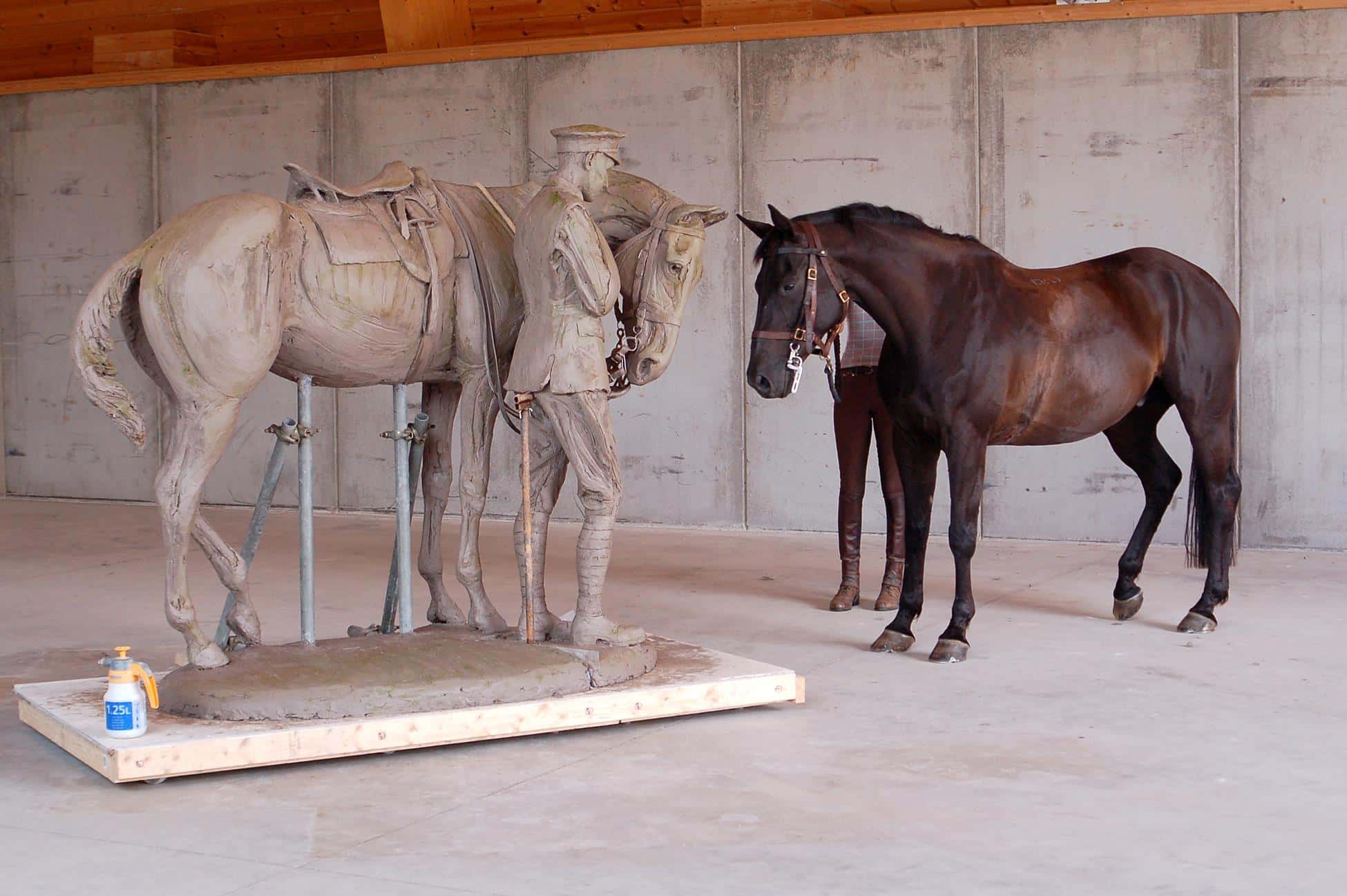 War Horses of the World Wars