Proof That Age Is Just A Number – 66yo Rides the Mongol Derby, Part Three

Welcome to Part 3 of Julia Fisher’s 2017 Mongol Derby race adventure, a 4 part series Julia has penned exclusively for WARHorses. You may wish to read Part 1 and Part 2 before proceeding.

Julia has cross trained for a year, lost 50 pounds, put up the rather hefty entry fee and travelled half way around the world to participate in “the world’s most difficult race”. There is no one better prepared for the 1000 mile journey across the desolate Steppe. Race day is here – ready, get set, go!

…I flew out to Ulaanbaatar, the Mongolian capital a week before the race. That part of Mongolia is high plains – similar to the area around Denver. I knew that acclimating to the reduced oxygen at that altitude can take some time. I had arranged to share a room at the home base Holiday Inn with a young woman from Maine. We spent our week hiking around the capital, checking out the restaurants and markets, and connecting with the other 40 riders as they arrived over the course of the week. By the time the organizers convened our first training session on the hotel conference room, we were all pretty keyed up.

We spent an entire day in ‘classroom’ activities. The organizers went over all the rules (for the OTHER competitors – I had read everything 17 times before even applying). This wasn’t trivial as we were to be ‘on our own’ for 10 days. Horse stations would have vet checks, fresh horses, water (needing purification tablets), food, and a place inside a ger to put our sleeping bag; but any other help (medical help or trail advice) was considered ‘exceptional’ and would incur time penalties to our ride. Our trail manager went over the course carefully. The trail is different every year, and a carefully guarded secret until training day. Water crossings, swamp crossings, rocky and mountainous areas got special attention. Meanwhile, our GPS was loaded with the trail. We eventually weighed in our riding gear.

Early morning on the second day of training, we climbed into a tour bus that spent the next eight hours crossing the steppe. We did stop for lunch, and a couple of ‘rest stops’, but otherwise drove directly to the start camp. We arrived with enough light to have the opportunity to choose a horse off the line and take a test ride. Inadvertently, I chose a little chestnut stallion. Only males are used for riding, and some will be stallions. Mares are used exclusively for breeding and dairy. All dairy products on the steppe are made from mares’ milk. But he was beautifully behaved. My third training day found me on another little stallion. This ride was expressly to confirm that we were able to navigate with our GPS. They had loaded a 5-mile trail into the unit to give us practice with reading and following the display. My little stallion taught me that day that I might have issues with getting my horse to move out. He did fine on grass, but when we hit any rocky areas, he would only walk – and very deliberately. Of course, none of these horses have ever had shoes.

Race Day. Yes, I competed! I was excited and more prepared than anyone has ever been – but ended up having the dubious honor of being the first rider disqualified by injury for the 2017 race. We were required to carry on our person 3 things: our water supply, our Emergency Locator Beacon, and our GPS.

The day started with my being assigned a super little gelding. ‘Super’ because he was willing and manageable and attentive to my hands. But, I also said ‘little’. At the start, he took off galloping with the rest of the field, but it became clear early on, that his short little legs were not going to keep us at the front of the field. In spite of his easy lopey cantering, we fell further and further behind, and I finally let him trot. I was absolutely not concerned; we were moving and making decent time. There’s an apt expression in Endurance: You can’t win a race on the first leg – but you can lose it. My strategy had always been: Just keep moving. I had no interest in burning out this little gelding, as his presentation at the vet check is hugely important in my overall performance efficiency and standing.

As the morning wore on, I overtook two women who seemed to have a different idea about where the trail was headed. I consulted my GPS and realized that they were cutting a corner on the trail that could actually save us some significant amount of time over following the proscribed route. I decided to fall in with them. Very quickly I regretted that decision. The organizers had warned us that we were free to follow any route between stations that we wanted, but that the map we were given provided what they considered to be optimal terrain and footing. Within 30-45 minutes, the gently sloping hillsides became steeper and the descents into gorges almost treacherous. At one point, a young Mongolian man on a motorbike overtook us and urged us in the strongest possible language to abandon that route and make our way back to the trail. I was frustrated. Another delay. But cutting my losses, I turned cross-country – trotting most of the time, sometimes walking, on my own to regain the identified route. I’m still not sure how the other women managed. They were not entirely willing to give up on their plan. They actually arrived an hour behind me at the station.

By mid-afternoon, I was feeling optimistic about finishing the leg and possibly getting in another before the 8 pm cut-off. A little bit bigger horse, a little bit faster horse and I could easily run the 25 miles between stations in 2.5/3 hours. Planning this, I was 2 km from the station and crossing a glorious little valley with yaks grazing and goats scampering, and a couple of gers set up, when a dog charged my little horse. He freaked out and bolted. I was concerned but not unduly so (I’m no stranger to bolting horses). He wasn’t acting up or trying to get me off his back, he was just afraid. I dug in my heels, grasped both reins determined to stay on. But after a minute of blind terror, he dodged to the left and physics took over. I came flying off his right shoulder. As I flew through the air, I was concerned but not unduly so (I’m no stranger to flying through the air from a horse – and those are little horses).

My first instinct on an unplanned dismount – assuming I’m not under the horse’s feet or in the path of another animal – is to simply lie still for a few seconds, replay the scene quickly for areas of concern, and take inventory of body parts which might have been affected. I had definitively taken a dive onto my right side and there was a clear recollection of a searing pain in my ribs when I landed, which I was not sure how to process. But the more immediate concern was that I wasn’t breathing. Well, Silly: Breathe! My intention? – the will? – the necessity? was there; unfortunately, my lungs? – chest? – throat? weren’t cooperating. I fought down the rising panic about not being able to breathe, and slowly, deliberately drew a short breath. Not great. But certainly this was a sign that I would eventually be able to master this important skill again. I quickly dismissed the whole breathing thing as having had the wind knocked out of me by hitting the ground, and I turned my attention to my surroundings and what might have become of my horse. This was no small consideration, as those little guys have no instinct to simply hang around. A middle-aged herder was bending over me with a concerned look on his face. I muttered something about my horse, as I looked around behind me. He pointed over the ridge behind me to nothingness. Damn! How am I going to chase down that little guy? Not to mention trying to get him to stand still while I remounted. A young woman was kneeling next to me on the ground. How long had I been down? I grasped the man’s hand and let him haul me to my feet trying to make sounds reassuring him I was fine. I was pretty sure there would be no English here. As soon as he released my hand, I plummeted back to the ground. I wasn’t dizzy, but somehow I had no balance whatsoever. There was nothing that allowed me to stand upright. I was also keenly aware of something pulled in my right shoulder and shoulder blade.

I let the herder haul me onto my feet again. This time I was able to stay vertical and when I looked over my shoulder, I realized that someone had caught my little gelding and was leading him back towards me. I was elated. Trying to find him (perhaps unsuccessfully) could have cost me hours. I straightened out my helmet and my gear on the saddle, and my pack with the GPS – noticing scuffing on my sleeve and the right side of my jacket – and tried to haul myself up into place. But my weakened left hand and my bad left hip demanded serious cooperation from my right side (hand, shoulder) to manage, and it just wasn’t happening. 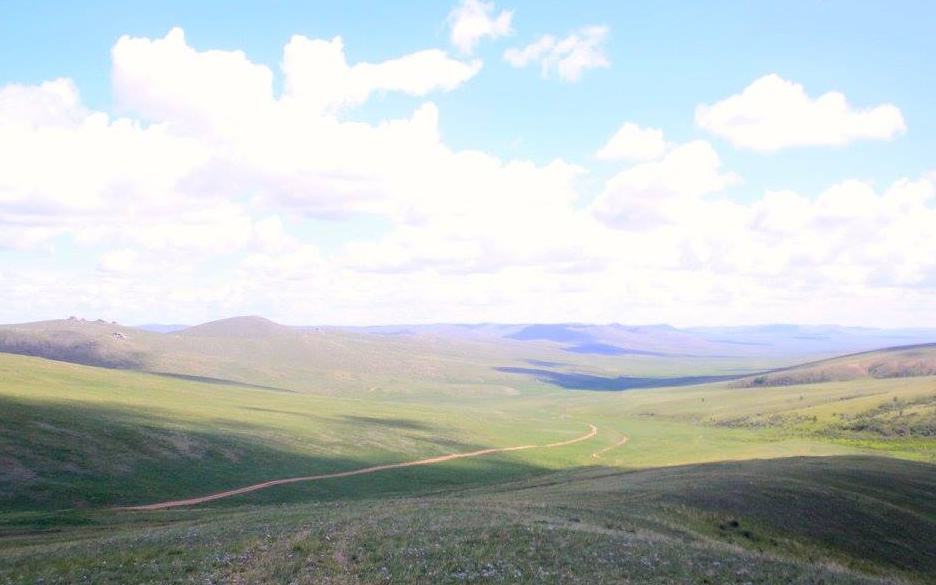 I tried three times before I gave up. It was only 2 km to the next station, and I could walk that easily. The weather was glorious. It would obviously cost me some time, but I was anxious to get back on the trail. I hadn’t had any food since breakfast; they would have something to eat at the station. Also I was curious to see if I could catch my breath a bit and work out that kink in my right side and shoulder by walking a bit. Over the objections of the herder and the young woman, I set off on foot. I barely got over the first rise, out of sight of the yaks, and not feeling too bad, when a young boy – not more than 10 years old – came galloping up to me. He grabbed the lead rope from my hand, parked his horse in front of mine, pointed emphatically at my saddle and said, “Mount!” I tried to protest that I had actually tried that – and thank you very much, I’m fine – but he didn’t allow room for argument. He pointed again at the saddle and barked again, “Mount!”

I shrugged, smiled, and turned to get on. Amazingly, I managed to pull myself up. The little boy was frustrated that it took me so long. But I was delighted that I wasn’t going to have to walk that last kilometer and a half, after all. As I set off toward the station at a trot, he was at my side urging my horse into a canter. There was that annoying pull in my right shoulder, shoulder blade, and side…
Eventually, delighted to be arriving at the station, I trotted directly up as there was no one else at the vet line. I carefully climbed down from the saddle, wincing a bit at the pain in the shoulder blade. I reached for the girth buckles, as we were supposed to pull our saddles off before presenting the horse to the vet. But the buckles got further and further away, as I realized my balance was again nonexistent, and I was hitting the ground again.

The race begins, Julia has dedicated a year to prepare for this day – how goes the race? Read the final installment now!