Proof That Age Is Just A Number – 66yo Rides the Mongol Derby, Part One

We WARHorses know that our age is just a number and not a milestone that determines our ability to ride, drive and enjoy horses – right? Before we introduce our guest writer, lets consider a few numbers – for sake of perspective.

WARHorses is pleased to share a four part series written by Julia Fisher. Julia took up riding 9 years ago. In 2017, at age 66, she traveled half way around the world to ride in “the longest and toughest horse race on Earth” The Mongol Derby. Riders have 10 days to ride 1000 km across the desolate Mongolian steppe.
If you think you can’t do something with your horse because of your age, think again. Need a little inspiration? We are sure you will find it in Julia’s adventurous tale – Part One.

About 10 years ago, my daughter looked at me sideways and asked: “So do you feel old?” I had no problem – even on brief reflection – in answering ‘No!’ It was right before I moved south, for this latest adventure: living in Hartsville, SC and teaching at Coker College. I really don’t feel old. But, when I tally the years of experiences I’ve managed, they add up to a pretty full life. I was born in Columbia, MO, went to elementary school in Chicago, high school in Milwaukee, and received my B.A. – a double major in French and Russian with honors – from U. of WI – Madison. I had studied German and Spanish as well, and I spent the next nine and a half years working for a French company in Illinois and New Jersey, and traveling periodically to the factories in France. I left that job determined to go to graduate school and learn more about how people process language – cognitively, socially, emotionally – both first and second or subsequent languages.

As a single mom, I moved to California and enrolled at San Jose State University in their Linguistics Master’s program. Before I finished, I was accepted into the PhD program at U. of CO in Boulder, where I first earned the MA. Upon completion of the PhD in Cognitive Linguistics a few years later, I was offered a two year post-doctoral research fellowship in the psychology department at the U. of CO – Denver.

Shortly after the completion of the fellowship, I moved my family to Massachusetts, for a position at Boston College in the psychology department. It didn’t take long to realize that I had somehow managed to come back to the land of WINTER – which I had explicitly escaped 16 years earlier. We stayed four years – long enough for my daughter to finish high school, before I started looking for warmer weather. 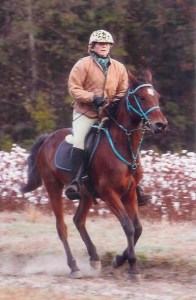 Julia and Maya competing in a 2017 endurance ride.

I’m something of a newbie to riding. I took my first riding lesson 9 years ago last month. My youngest child (my daughter) had just gone off to college in Oregon the previous fall, I had just moved down to SC myself (my son stayed in MA), and I found myself exquisitely alone for the first time in 23 years. A colleague from the college suggested that I take a riding lesson – for something to do as well as a stress reliever. He had a horse that he boarded just outside of town and there was an instructor at his barn.

It was awesome. I had ridden a few commercial trail rides over the years but nothing that actually expected me to know what I was doing, or to understand ‘the horse’. By the end of that first summer I was sold. The barn manager asked if I had ever considered doing ‘endurance’. To my question: “what’s ‘endurance?” she laughed: ”Pretty much what it sounds like. Get on your horse and ride until you can’t stand it any more”.

She had a little mare that she wanted to keep in condition, but also a couple of horses that she was getting paid for training for endurance. A serious component of a training regimen for endurance rides is the actual time investment. You and your horse don’t get good at spending hours on the trail at a brisk pace without spending hours on the trail at a brisk pace. She was looking for help splitting the work. She recruited a third woman to be sure all the horses got worked, and we set a schedule for at least 2 – sometimes 3 times a week to devote afternoon hours to our riding together. In September, I accompanied her and the client horses to a ride at the Biltmore Estate in Asheville and was frustrated that I hadn’t planned to ride with them. By October, I was ready to give it a try. I registered for the Sandhills Stampede up at H. Cooper Black Recreation Area in the Sandhills State Forest system to do a 25 mile ‘Limited Distance’ (LD) ride. We finished with a respectable placing in the middle of the field. 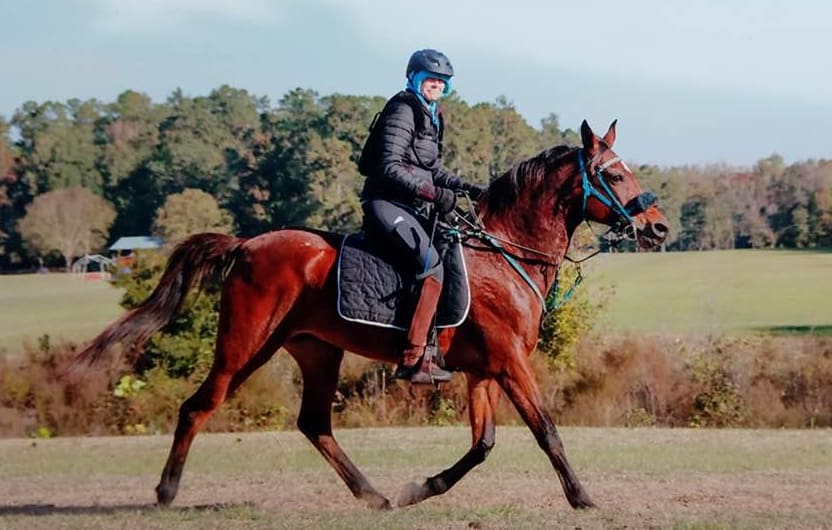 It must have been pure adrenaline that got me through. I really don’t remember anything except the rush of completion. I registered immediately for the next ride – Broxton Bridge in Ehrhardt, SC. The LDs are typically split with roughly half on one side of a vet check and mandatory hold time (40-55 minutes ‘rest’ for the horse, usually spent in base camp). This second ride, by the time I got to the first vet check, I felt like I had been hit by a truck. I was sure that I wouldn’t be able to ride the second half (loop) at all. I didn’t want to tell my riding companion. I had been training as the old lady of our little group, and I was determined to not hold anyone back, or be the weak link. But posting for 3 hours can take its toll on your quads. So at the hold I had two large bottles of caffeinated soda and about 6 brownies. The effect was almost immediate. It was the first step in my understanding of the energy and nutritional demands of this kind of distance riding.

I was hooked. I did three more rides on that little mare before my trainer began pushing me to buy her – or buy another horse of my own choosing to be able to continue my newfound passion. By the end of that next year, I had bought a Straight Egyptian Arabian mare, a five-year old pick-up truck, a small used stock trailer, and four 10-foot metal corral panels that I can lash to the side of my trailer. I travel relatively cheaply to compete in rides from VA to FL and effectively camp out in a tent at ride sites. I’m limited geographically when school is in session, because I’ve always taught on Fridays. There are five rides a year within 3 hours 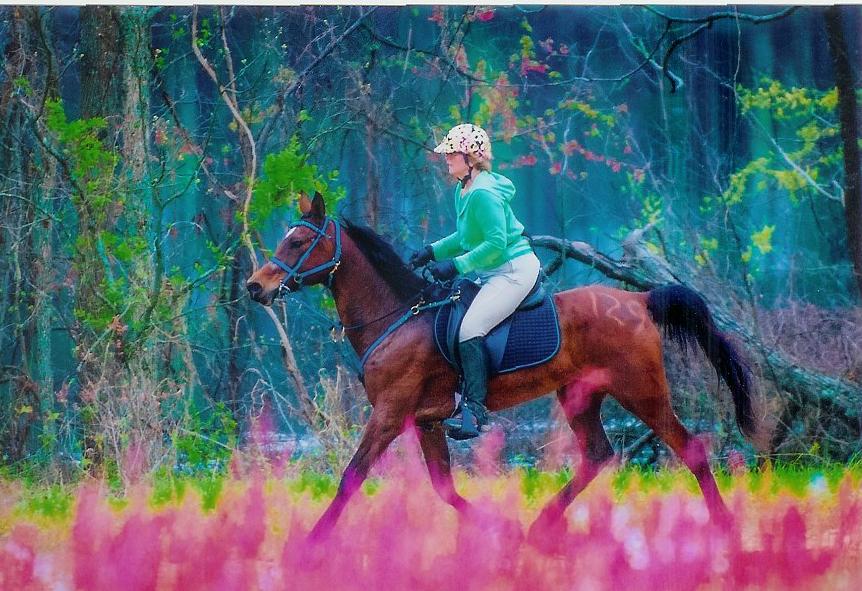 By the time I discovered the Mongol Derby in 2013, I had been doing 50-mile endurance rides for a couple of years. The AERC (American Endurance Ride Conference – the sanctioning body for endurance rides in the U.S.) specifies riders must complete the 50 miles in 12 hours or less. While most times I finish in considerably less time (my best time for a 55 mile ride was 4 hrs. 51 minutes), I have also taken 11+ hours to complete. I became obsessed with the Mongolian race and the riders. I began watching every video I could find of previous rides. I looked up the riders and began stalking them on social media and wherever I could find them. I was picking their brains for any information they were willing to share about the ride. Without exception, I found they were all willing to share everything. It was as though the experience had gotten under their skin and changed them in some profound way at a very fundamental level. In 2014, I went to France for my sabbatical and while I was there I looked up a rider and spent a day with her. By January 2015, I realized I was doing the ride in my sleep. I could hear the hoof beats, I could smell the rain, I could feel the wind in my hair, and the rocking horse canter of the little horse as I crossed the steppes. I started allowing myself to actually consider doing the ride. To my knowledge the oldest person to have completed the ride was 55 years old. I’m not sure if that’s true or not. But my new friend insisted that she felt I had a reasonable chance of being accepted for the ride.

In 2016, I turned 65. I grew up in the city of Chicago. Concrete and steel and asphalt. I’m an academic, so I spend my career in a classroom with scholarly, intellectual pursuits. My obsession with endurance has to do with having become addicted to the smell of pine needles baking in the sun, the rustle of squirrels in the leaves, or the deer and turkey that my mare and I flush out of the bushes, and the birds soaring overhead as we canter through. Earlier that year, I decided to try to turn this dream ride into a reality – before I might really not be able to complete the 1000 km.  But I have been fighting the battle of the bulge since I was a teen, and there’s a strict weight limit for the riders. The organizers and local herders supply a fresh Mongolian horse every 25 miles or so, and those horses are considerably smaller than the animals we are used to in this country. So in January of that year, I determined that if I could lose 40 lbs. by the date of that 2016 ride (August), I would apply to compete in 2017. By August, I had lost 50 lbs. 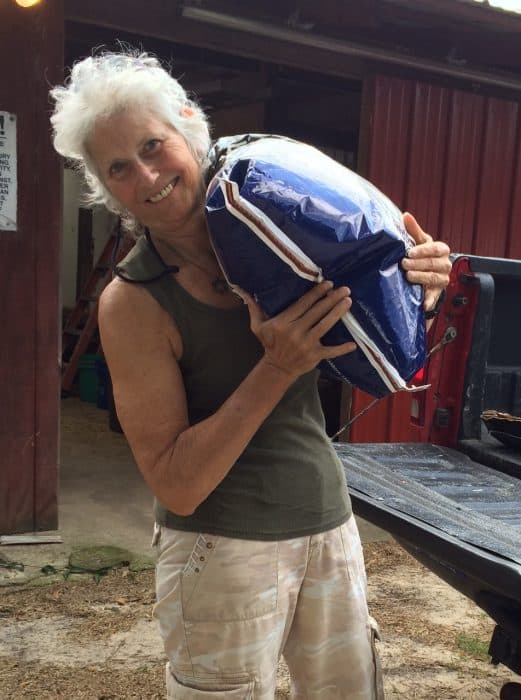 I didn’t tell anyone why I had been so serious about the weight loss, or that I had applied to ride the Derby – not until I had been accepted. I was afraid that the organizers wouldn’t accept my application, and I didn’t want that embarrassment. But once my references had been contacted, credentials confirmed, and after an hour long phone interview with the Adventurists, I was accepted and began training in earnest. My connections with previous competitors were absolutely invaluable in terms of getting help and advice for what to expect and how to go about preparing. I believed this ride would be the most demanding physical challenge of my life. Of course, I had been doing as much riding as possible, but also otherwise pushing myself physically whenever possible. For me, that was pretty simple. I just didn’t take short cuts to avoid physical labor. I board my horse, but I haul my own feed and hay. I do my own yard work around my house. I joined the local ‘Y’ and began swimming as many days a week as I could get in. I had been doing some regular kayaking for additional upper body workouts. I was probably in the best physical shape I’d ever been in. With the exception of my sabbatical summer in France, that is the first summer in 10 years here that I was not teaching. The idea was to have as much flexibility as possible to train. Cross training is critical as this kind of riding can demand all you have to give. It’s true endurance riding.

Many of the horses are green. There is no guarantee of anything more than 30 days under saddle. We’re traversing 1000 km of rugged terrain with a GPS and a sleeping bag. The ride calls on everything you know about horses and riding and yourself to make it through. I’ve done more than 20 50-mile rides, but since I was accepted to do the Derby every time I’m was there competing, I found myself equally consumed with thoughts of “Oh my! What have I gotten myself into” and “Man! I can’t wait!”