As young, horse loving girls we dream of the day we have a horse of our own. But our dreams don’t stop there. They evolve to galloping through a field of tall grass under a starry sky, splashing through the ocean surf, perhaps even riding across the country alone. They’re only dreams, right? Not for one girl who never abandoned her wish to ride across the United States. At age 52, Angela Wood’s coast-to-coast dream came true. 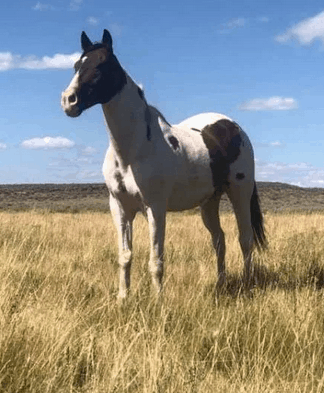 A southern girl at heart, Angela has always embraced a nomadic spirit. Born in Georgia and raised in Idaho, she now calls Kentucky home. But she’s rarely there, opting instead to keep moving, driving trucks cross-country. At age six, Angela got her first horse, a shetland pony named Kathy followed years later by a quarter horse named Connie. Endurance was her sport of choice and seemed to satisfy her desire to travel distance by horseback but always lurking was that coast-to-coast dream. When Connie developed heaves Angela retired her to a more suitable climate with friends up north. Angela could never know at the time that Connie’s retirement would mark the starting point of her life long dream.

WARHorses recently chatted with Angela about her year long trek across the United States.

What is the Chatrek Challenge Hunger America Trek?
I wanted to do something to bring awareness about the 16 million hungry children in the United States. I don’t think people realize how big a problem hunger is. These are families who make too much to qualify for government assistance but not enough to properly feed their children. These parents work, often several jobs to make ends meet but can’t make it. We don’t often talk about this issue.
All my life I have wanted to ride a horse cross country but never imagined it would actually happen. On my mother’s birthday, April 2015, the idea of this trek began to form. There seemed no better way to reach folks and talk about this issue of hungry children than to engage with them by horseback. This trek fulfills both my childhood dream and my lifelong passion to help children.

How did you prepare for your trip?
I planned for 3 years, researching, reading and talking. I started by talking with riders associated with the Long Rider’s Guild and reading “Too Proud to Ride a Cow” by Bernie Harberts. I decided it would be better to drive the horses than ride so I researched wagons and settled on a custom ride built by a local Amishman, Noah Slaybough. I didn’t have much to spend so I just laid it out on the table and asked if he could build me a suitable wagon for $3000. He generously agreed. 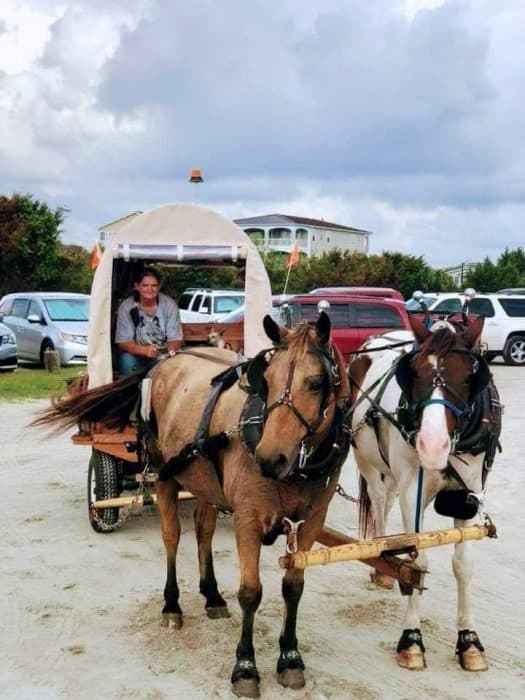 Tell us about your team.
Starbuck is a 10 year-old Quarter horse from foundation stock. A rescue found him starving on the ground unable to stand. The veterinarian who tended him said he would have died within a day. I call him “Trouble” for good reason. Early in our journey he figured out how to lay back a bit so the other horse had to do the bulk of the work. But he’s a good boy and really loves meeting people.
Renegade was my son’s horse, inherited when he left for college. He is an American Paint, 17 years old and the nephew of my former mare, Connie. He’s a bit grumpy but he always gives 120% when he works. He is a reliable and great lead horse, he always tries to give his best.
My chihuahua also came on the trek. Seven year old Schatzie is my official ambassador. She is very friendly and like Starbuck, loves people. She mostly sat on the bench next to me on a pillow and blanket. On chilly days she wears a sweatshirt that I sewed on pockets and stuff with hand warmers to keep her warm.

How were those first days on the road?
Its not as hard as you might think. Looking back it seems the first 12 miles were the hardest but then you fall into a rhythm and just keep going. I thought a lot about how our pioneer ancestors traveled with few roads often in poor condition, difficult terrain, changes of weather and managing food and water supplies without knowing what resources were ahead. In those ways, I had it easier driving on paved or at least maintained dirt roads and I could stop almost anywhere for food, water and shelter. 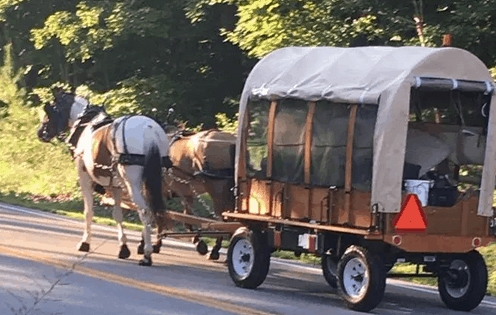 August 2018, near the Cumberland Gap, Kentucky.

What supplies did you pack?
I made certain I always had four days of supplies for the horses. They worked hard and needed to eat regularly and well. During the summer I fed each 15 pounds of grain and alfalfa hay every day. In colder weather I upped their grain to 18 pounds each.
When we left home I had covered my garage floor with items I thought I would need. Early in the trek I realized I didn’t need half that stuff. About 700 miles from home I overnighted with family and left a pile of supplies with them. Other items I gave to people I met who needed it more than I.

What was a typical day on the road?
It may surprise some people, but when you drive a team of horses across country, you’re not traveling from dawn to dusk and every day. We travelled three or five days then took a day off to rest. 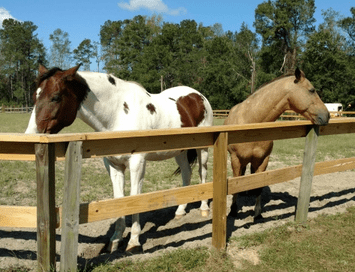 Rest Day for Renegade and Starbuck.

Each morning I woke early to feed the horses then pack and hitch up the team. We travelled about 10 miles then would stop to rest, water and feed the horses hay, then would travel on another 10 miles and end the day. The horses always my greatest concern. In the summer we stopped about noon as the afternoon heat settled in. In the winter we started later in the morning and travelled until 3 or 4 p.m..
My afternoons were busy checking the weather and mapping the next few days travel. I used three different map apps to help me locate where to cross creeks or highways, how to pick the best terrain. In parts of the country I didn’t have a lot of roads to choose from so I had to carefully plot which road went where I wanted to go. I couldn’t leave the horses alone so I spent a lot of time wandering around keeping busy with them.

How did you make arrangements to overnight at people’s homes?
I didn’t have any specific plans, sometimes I found a campground or church parking lot. If the weather was going to turn bad I would knock on doors or ask people I passed in town if I could overnight in their yard. Things changed once I crossed the Mississippi River heading west. People always know someone down the road, especially in more rural areas so they would call ahead 20 miles and find a place for us the next night with their friends or family. We were camped one night in Oklahomas at an RV park. A big winter storm was headed our way and I was worried about the horses out in the open. I got on the internet and posted for help. Three hours later the horses were safely stabled in a barn and I in a warm house with our kind hosts. The generosity of the people I met was amazing. Everyone was very down to earth and interested in helping.

What was one of your most memorable experiences?
Traveling back roads in Wyoming I went five days without seeing another person. I felt like a pioneer. At night I could see stars from horizon to horizon. The only sounds were the horses eating, bugs and once in a while a coyote howling. I loved it. 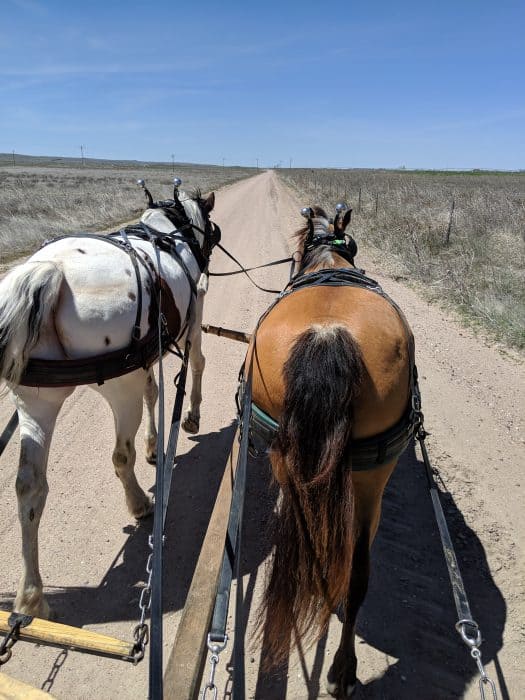 May 2019, open range country in Wyoming.

Were you every afraid?
A few times I was concerned for the horses safety. One day the team suddenly jumped to the side of a desolate road. The wagon ended up in a creek, stuck in mud. I unhitched Renegade and rode bareback a couple miles for help. Several folks returned and helped unstick the wagon. It wasn’t until after I washed off the mud and was rinsing Renegade that I realized he had been bitten by a snake. Luckily it was not venomous. That made me think about what I was doing and should I quit?
I thought about it a lot and decided I couldn’t quit, that there was something larger than ourselves pushing us onward. I thought about how a hungry child can’t quit being hungry because he wants to. I started this trek to bring awareness of the plight of hungry kids. I was not going to quit on them. 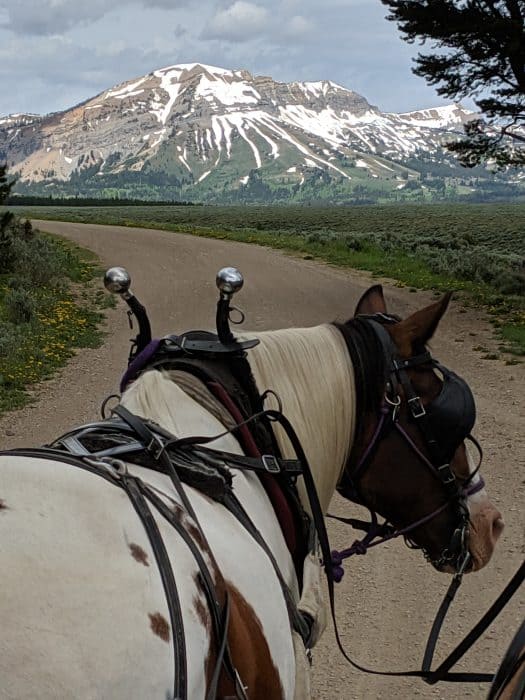 What would you like to say to our WARHorse readers about your mission to help children?
My hope with the trek was to raise $1 per mile or $7000 but more than the money I hope to inspire people to action. Maybe we can’t change the world but we can change one person’s world. A hungry child only things about hunger. That surprising feeling prevents them from becoming successful adults. I hope people will get involved and help someone who needs it – a hungry child, a lonely elder or a family that can’t make ends meet. Donate to any organization that helps to feed your neighbors, your friends, your family. Please help anybody, get involved and don’t look the other way. Together we can end hunger in America.

What advice would you offer someone considering a long ride or drive?
Seek advice from experienced long riders, get good equipment, prepare your horses and just do it. You are braver than you think.

Angela reached the California coast October 6th though not as she had originally planned. A few hundred miles from the coast, Renegade slipped and broke a small bit of bone off his hip. He will fully recover within several weeks. Angela left him and Schatzie with a host family and finished her trek riding Starbuck.

Just last week Angela and her entire crew arrived back home in Kentucky. Angela exceded her goal of raising $7000 ($1 per mile traveled) and plans to continue working to bring awareness for America’s hungry children. If you would like to support Angela in her mission, please click here – No Kid Hungry. 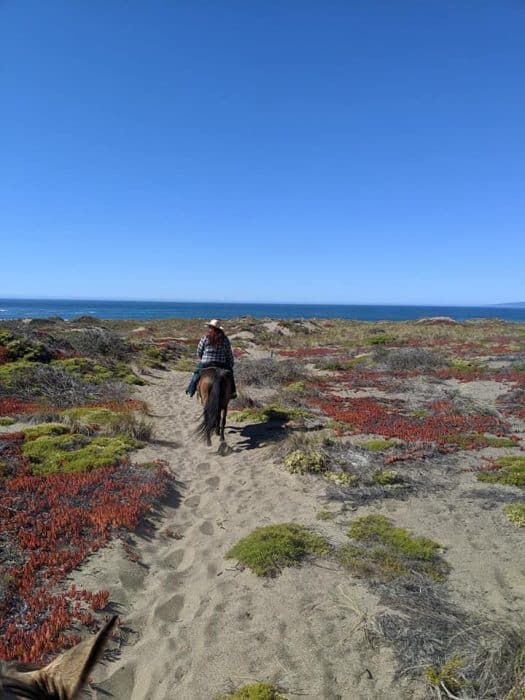