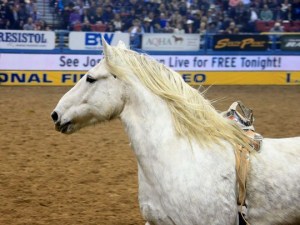 McNeely bred and raised Virgil and later sold him to the Bar C5 Rodeo Company. McNeely, a fan of the movie “Tombstone”, he named the horse Virgil after one of the Earp brothers. He also owns a horse named “Wyatt Earp” and a mare named “Big Nose Kate”.

He takes pride in raising a champion and confides that when watching one of his former horses, he never roots for the cowboys. That sits just fine with professional cowboys who voted to honor Virgil because of his consistency. A cowboy who rides through a good bucking horse can make a decent living.

“I was actually really relieved to be honest with you,” said O’Connell who placed in each of the three rounds. “You’re just sitting there anticipating the draw sheet to come out, and you’ve got things running through your head. I grabbed my cross and my wedding band. I just prayed to God to put me at ease and give me what I needed. He did exactly that. He gave me the world champion bucking horse.”

O’Connell made the best of his ride scoring 91.5 points on Virgil to win $26,231 and tie the arena record. The NRF Finals run through December 16 at the Thomas and Mack Center in Las Vegas, Nevada.