There’s no denying that WARHorses love their horses, mules and donkeys.  Some of us grew up with horses then stepped away to raise families and enjoy careers. Some of us never had a horse but finally found a way in our later years. A few of us have been lucky enough to have horses throughout our lives and fewer still have made them our life’s work.

Tony Greaves, 73, is one of those lucky folks who has worked with horses his entire life.  Raised on a Shetland pony farm that later became a quarter horse ranch, he found his horse passion at an early age. There is no doubt that Tony has one of the best jobs in the world. From his back porch, he looks out over his beloved horses, all 180 of them. Tony and his wife Carol are the owners of Little America Miniature Horses in Buda, Texas (USA).

In over 30 years, Tony hasn’t missed the Fort Worth Stock Show. He has been active with the American Miniature Horse Association (AMHA) for many years including three as President. In three decades of breeding and showing miniatures, Tony has amassed so many trophies, he now recycles them, donating them to local shows for the children. The AMHA stud book lists more than 1400 horses with the prefix LA– Little America.

Few of us have managed to make horses part of every day. We recently spoke with Tony who generously shared his passion for “the little guys”. 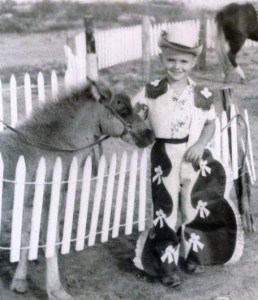 Tony loved the little ones from a young age

WH:
When did you first become interested in miniature horses?

TG:
I grew up around ponies and later quarter horses; horses were my dad’s business. I particularly enjoyed the Shetlands. One of my earliest show memories was showing a little mare and winning a reserve championship class. Her name was Texas Baby Doll, she was 38” tall. I loved the quarter horses but it was the small ones that always caught my eye. As an adult, I started buying miniatures and told my dad I would one day breed 22” horses.  I haven’t done it yet but my dad lived long enough to see our first 28”.

Are there particular shows where Little America Miniatures competes?

How do you prepare the horses and haul them to a show?

We keep the show ponies in stalls in the barn with daily turn out. We prep them like you would a full size horse with some modification. They are conditioned with exercise in our round pen but because they’re so small, we’ll do two or three at a time. We body clip for most shows so the judges can see their conformation.

I had the stalls removed from our 3-horse slant Featherlite trailer and put in a line of tie rings on both sides. We tie the older horses then let the young ones loose inside. We can comfortably haul 15 miniatures. 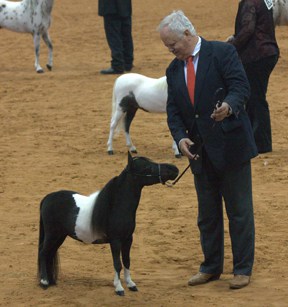 Tony showing Fan Man at the World Championship in 2011

What classes are offered at a miniature horse show and what are the judges looking for?

The American Miniature Horse Association (AMHA) was formed in 1978. Our show formats are similar to those for full grown horses with a few modifications given the size difference.

Show judges must earn a card from the AMHA to work a show. They have guidelines to judge for in every class. Shows include divisions for youth, amateur and open and classes in driving, hunter/jumper (where the exhibitor runs alongside their horse), showmanship, liberty and halter. The halter classes additionally include divisions for size, gender and age.  Like any horse show the winners in classes then compete for reserve and grand champion titles.

What is your favorite class to compete in?

Probably the liberty class. Its 90 seconds of fun watching them prance around the ring and kick up their heels to music. 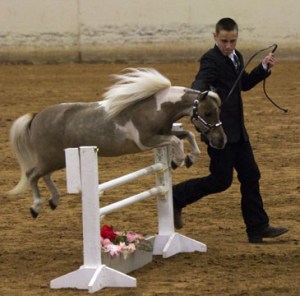 Is there a particular achievement of which you are particularly proud?

Our Thursday’s Kids program. My daughter, Lauren, started the program in 2005 when she was in high school. Every Thursday we invite local kids to the farm to learn about the mini’s. We do not charge a fee, it is a free program.  They groom, halter, clean stalls and learn to handle the minis. During show season, we take the kids with us giving them a chance to show if they show interest and talent. We will generally have 80-90 entries at the shows. I get really emotional talking about the kids, some of them have been coming out for years. We get to know them as well as we know the horses.

What makes you most happy when you’re back home?

I really enjoy foaling season, March through June, and meeting the new babies. Some days are quiet with a single birth but on some we’ve had as many as four. My favorite spot is the porch where I can relax and watch the horses graze and foals playing. 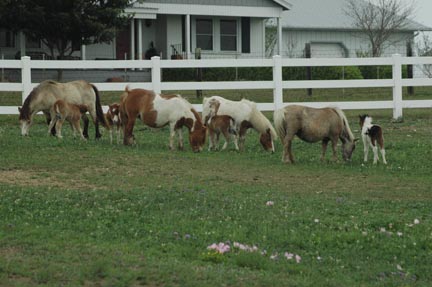 Are there any barn chores you particularly dislike?

I generally hate problems of any kind, its nicer when the day goes smoothly. When I was a kid I said that there were two things I hated about running a horse ranch; loading hay and unloading horses. I solved both problems, now our hay is delivered and loading miniatures is easy, I can just pick them up and put them on the trailer if needed.

What are your breeding objectives?

The breed objective is to breed the world’s smallest perfect horse. I want each generation to be better than the last. One additional thing I told my dad when I was in high school that I wanted to breed some 22” miniature horses. 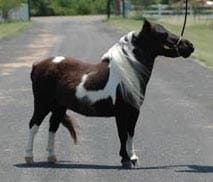 When I bred my first miniature sized horse 55 years ago, our Shetlands were 36” to 40” high at the shoulder. Today many of our miniatures are under 30”. The two smallest are 25” Little America’s Its Mardi Gras and 24 ½” Little America’s Fan Man. We’ve bred eight generations of miniature horses here at Little America, conformation is a priority – pretty face, large eyes, good feet, straight legs – the same traits anyone wants when breeding a full size horse.

Predicting color – forget about it. I can breed the same mare and stallion year after year and frequently get a different color. In some of our ads we use the tagline “For the little ones with a splash of color”, but one year we foaled 13 black foals in a row!

This year I did get a color foal I never had before, first time in 30 years. We always monitor the mares and one night this mare’s alarm started beeping. I headed down to the barn and the foal was already presenting. I could see his head and he was looking right at me. All I could say was “Oh, my gosh.” A few seconds later, our foreman arrived. He stepped into the stall, took one look and said “Oh, my gosh.” Since it was 3 a.m., we texted a picture to my daughter in Dallas so she could see him. That morning her text back was “Oh, my gosh.” He is a frame overo and it seems he named himself, Little America’s Overo’s Oh My Gosh.

How many foals are born at Little America Miniatures each year?

We will have anywhere from 40-60 foals each spring. 2018 has been a phenomenal year, one of our best, with 26 colts and 15 fillies so far all with great conformation and the most spectacular color ever! 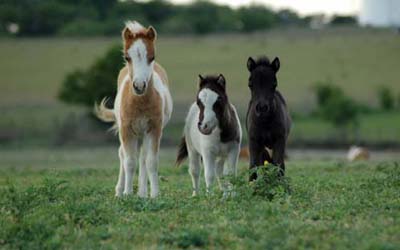 How do you come up with so many names?

All the names have the prefix LA for Little America, then we usually acknowledge the stallion, sometimes the mare when naming the foals.

Its funny, the foals seem to name themselves like LA Oh My Gosh. One afternoon the foaling alarm went off while I was watching tv. The foal’s father is LA Orion Mr. It so we named the foal LA Its Oprah because that was the show I was watching when called to the barn.

Another foal sired by Mr. It we named LA It’s a Trip. When the foal alarm went off during the night, I slipped on my shoes and tripped over the cat on my way to the barn. 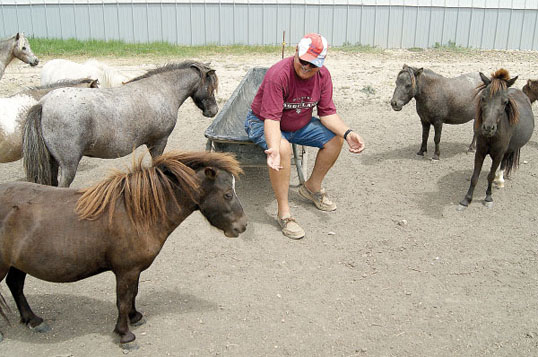 Tony knows every one of his 180 horses personally

Are minis a good option for older adults, WARHorses?

Yes. There’s a miniature horse that’s right for everyone. It is the best thing you could possibly do.

We had a fella who bought a miniature for his mom. He had built a shed and a place where she could sit and safely groom a horse of her own. She was 93.

A few years ago we took in 14 miniatures, the last of a herd of 40 that belonged to a couple in their mid 90’s. The wife had been competing in driving classes into her late 80’s. 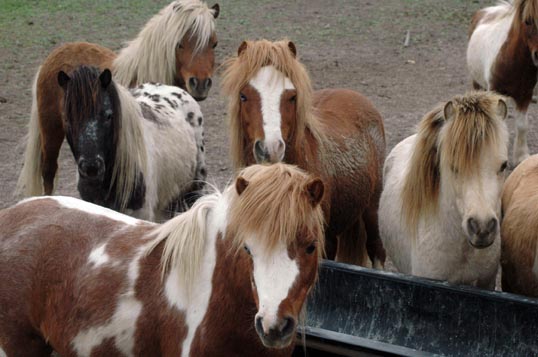 Miniatures are also great for small kids. A young rodeo couple bought one of our old mares, Miracle Melodee, to be a pet for their 18 month old son. A month later they sent video of him riding Miracle Melodee in a lead line barrel class. He won a Little Britches Belt Buckle and Miracle Melodee has a new show career at age 27.

We had bought another older mare, had her for years and could never handle her. She would jump the trough to get away from us. Buttercup, she was 24 when a preacher and his wife came to the farm looking for a miniature for some miniatures. They fell in love with Buttercup. I was honest with them and tried to talk them out of her but they insisted that was the horse they wanted. I sold her on the condition that she would come back here if she was too much. Within a week they sent a video of their 16 year old granddaughter happily grooming Buttercup in the middle of a lot with no halter or lead rope. I couldn’t believe it but was thrilled to see their bond.

Having miniature horses keeps me active, mentally and physically at 73. They are easy to keep, don’t need a lot of room, I feed 6 minis with the amount I would feed one big horse. And if you like to drive, a 30’ miniature can easily pull 2 adults around the neighborhood. You can be around them and feel safe because of their size.

If you did not have the mini’s what would you be doing?

Probably acting. My wife, Carol and I both have Masters degrees in Vocal Performance from The University of Denver and have worked professionally as actor/singers performing musical theater and opera in Colorado, Texas, the Carolinas, Kentucky, New Jersey and for over three years in New York when our older daughter joined us in professional productions starting at age two. Her children, our grandkids are also involved in theater and have extensive work in commercials, TV and stage including a Broadway play and Radio City.

What are your retirement plans and what is your vision for Little America Miniature Horses in the future?

Our younger daughter, Lauren, has always been involved with the miniatures. At some point she would like to take over the farm but right now I can’t imagine not being out here everyday with the horses and working with the Thursday’s Kids. I tell people who ask that I will probably retire the day after I die. 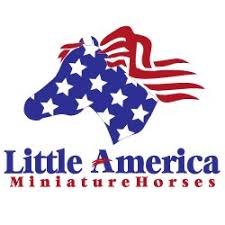 Little America Miniature Horses is the cornerstone of Tony’s dedication to “the little ones”. His life’s work extends beyond improved breeding and better horses. Tony knows his horses, every one of them individually – their strengths, their character and their potential. Each miniature horse born at Little America is a member of Greaves family. But it is his contagious enthusiasm and encouragement of others, particular children, to become involved with miniatures that may well be his most lauded accomplishment. 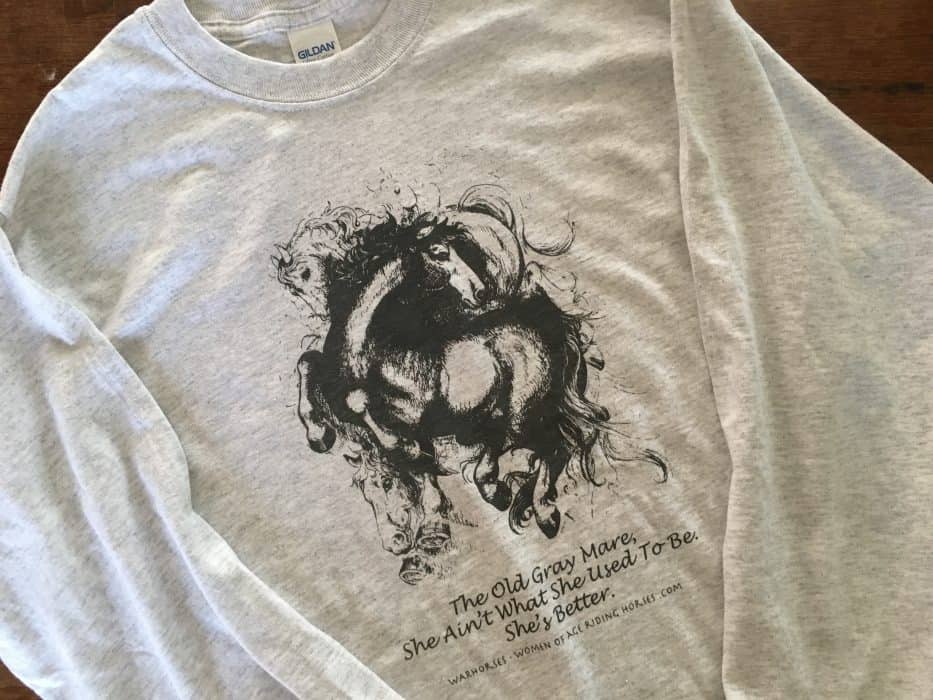 Exclusively available from the WARHorses SHOP

Did you miss our most recent
WARHorses Interview? 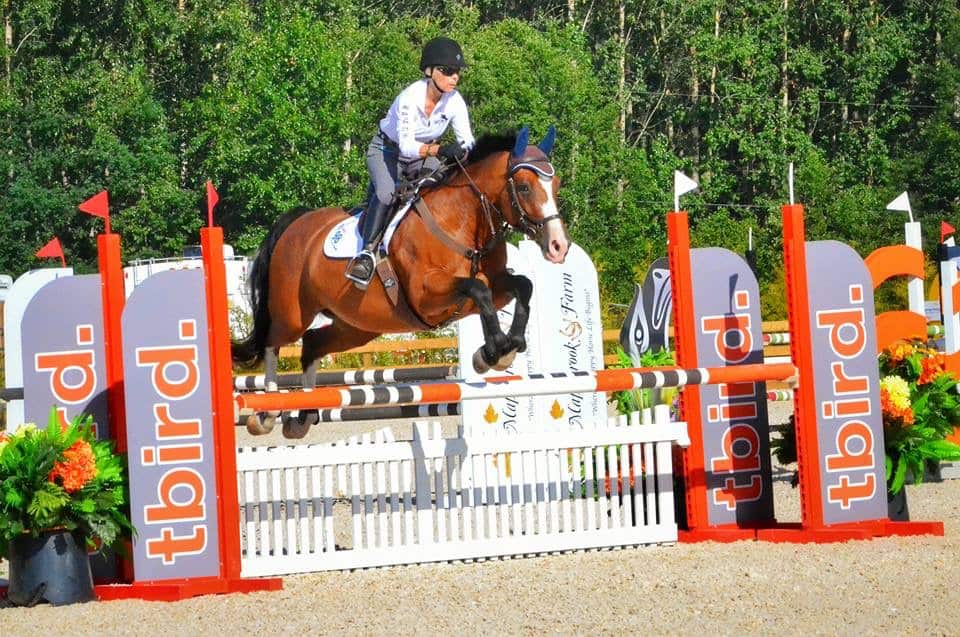 Learn what WARHorse Becky Desmond did to celebrate her 70th birthday. You’ll be INSPIRED!