It was the end of the Pleistocene Epoch, a 2,500,000-year period of climate turbulence. In Siberia repeated glacial periods were offset by warmer periods supporting endless grasslands. With each climate shift life on earth changed – animals evolved, new species developed while others died off.

He was born during one of Siberia’s more recent cooling periods nearly 40,000 years ago, the Ice Age. He was of the species Equus lenesis, a Lenskaya or Lena horse. His coat was light brown, the color of ginger. He had a dark stripe along his back, black mane and tail. When he was full-grown he would be about 9.3 hands, however, fate had other plans. He died when he was only a few weeks old. 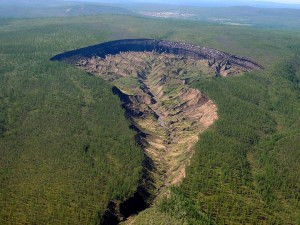 There is an area in Siberia favored by paleontologists. It is a man-made crater caused by clear cutting forests. Stripped bare to the weather it continues to expand and deepen exposing earth’s history, its secrets. The Batagai depression in Verkhoyansky, Siberia is referred to by locals as “the Mouth of Hell”.

It is here within the Mouth of Hell that a team of Russian and South Korean scientists found him. He was buried under 30 feet of dirt, dead for40,000 years he was so well preserved he could have been buried last week.

“This is the first find in the world find of a pre-historic horse of such a young age and with such an amazing level of preservation,” said Semyon Greigoriev, deputy head of Russia’s Mammoth Museum at North-Eastern Federal University, Yakutsk. 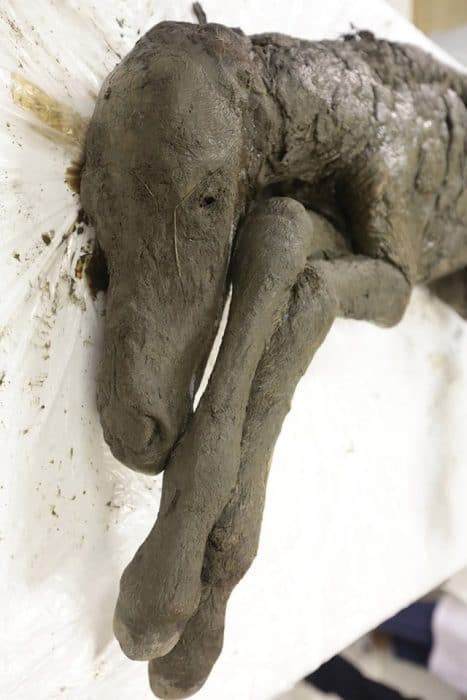 In the year since his discovery, the foal has yielded a great deal from his brief life. The dirt that encased his body providing clues about the ancient climate and fauna. Scientists conjecture that the foal likely became trapped in mud which he gulped during his last seconds of life. His intact internal organs allow analysis of his bowl to determine diet. Remarkably, his body contained a small amount of urine in his bladder and liquid blood.

His is the oldest liquid blood ever discovered. In 2018 scientists from the North-Eastern Federal University extracted liquid blood from a 32,000-year-old wooly mammoth carcass. Greigoriev and his colleagues plan to clone the mammoth and other Ice Age fauna. As a test case, they are already working to clone the foal.

The foal’s blood will not be the genesis of his specie’s re-birth. Red blood cells do not have nuclei; therefore they do not contain DNA. Instead researchers are looking for viable cells from the foal’s intact organs. Once harvested, cells can be grown in a lab then used to implant into a surrogate mare. In recent months, there have been multiple failed attempts to grow cells from the foal’s tissue. Researchers remain optimistic, so confident in fact that they are currently searching for a surrogate mare.

The task of regenerating ancient life is daunting. It should be. But modern science makes it increasingly like that sooner than later, extinction itself maybe denied its existence.