Horses are No Fan of This Actor

Actor, Cloris Leachman turns 92 on April 30. Leachman grew up in the Midwest (Des Moines, Iowa) but was never an equestrian in private life.  She is however, intrinsically tied to horses through the movies, most notably as Frau Blücher in Mel Brook’s “Young Frankenstein” (1974).

Leachman played the old housekeeper seemingly unaware of the affect her name had on horses. Every time her name was spoken, horses whinnied and reared in fright.

Many film devotees believe that the horses go nuts because Blücher in German or Yiddish means “glue” (as in ‘horses are sent to the glue factory’), but that is not true. The horse bit is actually a cinematic device of early film makers who used an ominous sound, an organ riff or clap of thunder, when a villain appeared on screen.

In “Young Frankenstein”, Brook’s over employed the technique as a humorous gimmick. Even in a setting where there are no horses present, like inside Frankenstein’s castle, the mere mention of “Frau Blücher ” launched a raucous reaction from horses. 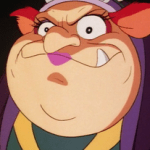 “Young Frankenstein” isn’t the only movie where Leachman played a villain to horses. She also voiced the malicious witch, Hydia, in the animated musical “My Little Pony: The Movie” (1986). Her character’s goal was simply to destroy all the Little Ponies. Yikes!

Cloris Leachman you are no friend to horses (in films) but you are a talented comic actor and like us, a “woman of age”. WARHorses wishes you a very Happy Birthday (insert boisterous neigh).