Black Jack was a feisty 15.1 hand black Morgan/Quarter horse cross born in Kansas in 1947. He was purchased by the US Army in 1950 and sent to Ft. Myer, Virginia in 1952 as a cavalry mount. Black Jack had no interest in being ridden, tossing nearly everyone who tried. His good looks and commanding personality did not go unnoticed. It was decided that he was well suited for the role of caparisoned horse for military funerals.

The riderless or caparisoned horse tradition dates back to Genghis Khan (13th century). The Mongols believed that the spirit of a sacrificed horse would travel with its master to the afterlife. While horses are no longer sacrificed, they continue to represent the tradition that the deceased will be accompanied by his faithful horse after death.

Many U.S. presidents have had their personal horses in attendance of their funerals including George Washington (1799), and President Zachary Taylor’s horse, Old Whitey (1850). Abraham Lincoln was the first U.S. president to be formally attended by a caparisoned horse at his funeral (1865).

The caparisoned horse is a black horse led riderless with riding boots facing backward in the stirrups to signify the loss of a fallen leader looking back over his troops one final time. Having a caparison horse attend a funeral is one of the highest military honors reserved for high ranking officers and political leaders.

He was held with such esteem that when he passed away in 1976, Black Jack himself was honored with a full military funeral including a caparison horse. He is one of only three horses to be so honored, including Comanche, the only Army survivor of the Battle of Little Big Horn and Sergeant Reckless. Black Jack was cremated and carried to his grave on the very caisson behind which he walked for nearly 3 decades. More than 400 people attended his funeral.

“I miss him today. He was definitely my best friend as an animal, if there is such a thing,” said Pete Duda, one of Black Jack’s early handlers. 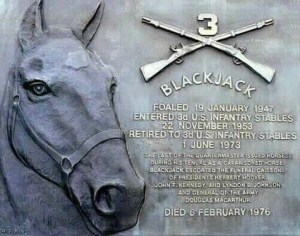