Her Horse Fell Out of the Trailer at 65 MPH

“I would trade places with her had someone told me what would happen that day.”

April Stark knows a thing or two about horses having been around them most of her life. She’s passed her love of horses on to her daughters and coaches their 4H equestrian drill team. April has a particular passion for America’s wild mustangs. She and her father are well known in the mustang arena as Team Pappa Mike. The two are members of the American Mustang Trainer’s Association and partner to train wild horses as well as advocate locally to educate the public about mustangs.

In February, the state of Kentucky seized dozens of neglected horses, among them 12 wild mustangs. A friend called April and asked if she could help. The horses were left to local animal control who were more adept with dogs and cats than horses, so volunteers stepped in lend a hand. For two months April drove 2 1/2 hours several times a week to help care for all the horses and particularly to work with the mustangs. Most of the mustangs had experienced some previous handling but one among them had been untouched, deemed aggressive and dangerous. Adopted in 2019 her BLM tag still hung from her neck. When their owner finally relinquished the horses, animal control was legally able to place the horses in new homes or with rescue groups and April took that ‘really wild mare’.

The mare was born in 2013 in Nevada. She was collected during a round up at the age of 2 and spent the next 4 years in a BLM holding pen. She was known only as number 2047. Adopted in 2019 she was unhandled until she was seized by the state. April knew what she was getting in to when she took on the mare and was willing to commit to whatever time necessary to help the mare find a good home. On April 2nd, April along with her husband and one of her daughter’s took that 2 1/2 hour drive one last time, excited to bring home their new mare, excited about her fresh start. At least that was the plan.

A chute had been set up to get the mare onto April’s horse trailer. The mare was haltered before loading, a short grab line hanging just behind her chin. She went easily into the stock trailer quietly munching hay for about 30 minutes before the Stark’s headed home. Their route was all interstate and traffic was light as Kentucky had just ordered citizens to shelter at home to temper spread of coronavirus. They were only an hour from home when a car pulled alongside waving frantically.

“We couldn’t imagine why they were flagging us down, everything seemed fine, we didn’t hear or feel anything unusual like a flat tire but we didn’t want to take a chance while pulling a horse. My husband pulled onto the shoulder of the interstate,” explained April.

As the truck slowed April looked in the rear view mirror and watched in horror as the back door of the trailer swung open. She leaped from the still moving truck and ran to the back of the trailer. It was empty.

“I couldn’t think. I couldn’t understand what I was looking at. The only thing that was going through my head was ‘where is my horse’?

April turned and started running back down the middle of the interstate. A semi slowly drove toward her, the driver rolled down his window.

“Your horse is laying in the middle of the road dying.”

April started running faster. In her hysteria, she had no idea how far she ran, she only knew she couldn’t see her horse and she was desperate to reach her. A police officer pulled up. April could only scream “My horse. Where’s my horse?” She got inside the patrol car and they sped back to April’s family and the truck. The police escorted the Starks the wrong direction down the interstate nearly 3 miles. They exited off an entrance ramp and drove through several traffic lights blocked by police cars so they could travel quickly. April could not understand where they were going. The truck driver said her horse was laying on the interstate, why were they being escorted along surface streets. They followed the officer into a gravel parking lot in which a dozen police cars had formed a circle and in the center stood April’s horse.

April walked toward the horse trying to understand what was happening and what she needed to do next. One of the officers approached and offered that he tried to get the mare’s lead but couldn’t get close enough. April explained that the horse was completely wild and that she herself had never even touched her. That however was exactly what she needed to do now, but how?

The officers had called for a vet but April had another idea. Rood & Riddle Equine Hospital was only minutes away and that was where they were going. First, she had to get the mare back on the trailer. Taking a few steps at a time, April led the mare forward. Without hesitation the mare quietly stepped inside.

Arriving at Rood & Riddle, they were greeted by nearly 20 staff who hid in stalls and behind equipment as April led the wild mare into the building, down a hall to a stall that had been made ready for them. The mare was sedated and thoroughly examined. No fractures though her wounds were critical, they were not life threatening. She suffered substantial road rash and a damaged joint capsule. While she was sedated the vets extracted a previously broken tooth and trimmed the mares hoofs. An IV port was placed in her neck for medication, she was bandaged up and released that same day. 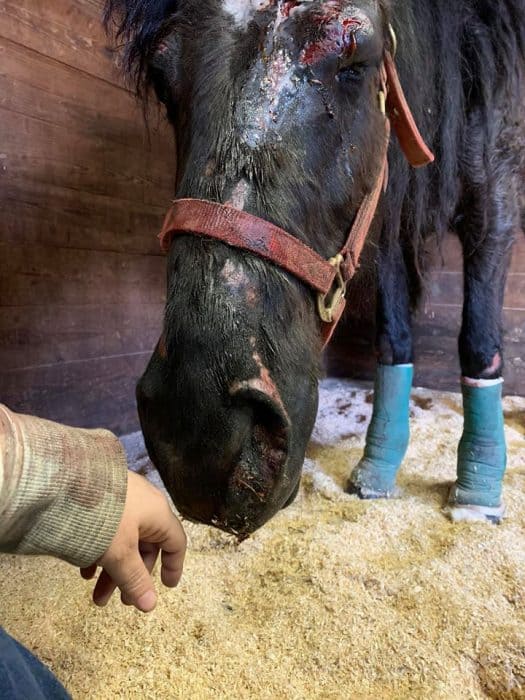 “This horse has been through so much. There’s just no quit in her.”

The Starks arrived home facing 60 plus days stall rest, daily bandage changes and meds. But first things first, the horse needed a name one suitable for a 7 year-old, untouched, mustang rounded up from the wild, stored for years at a BLM facility, adopted but neglected, confiscated by the state and when finally on her way to a caring home fell out of a horse trailer traveling at 65 miles per hour and lived. The name came easily to April. Her name would be “Survivor”. 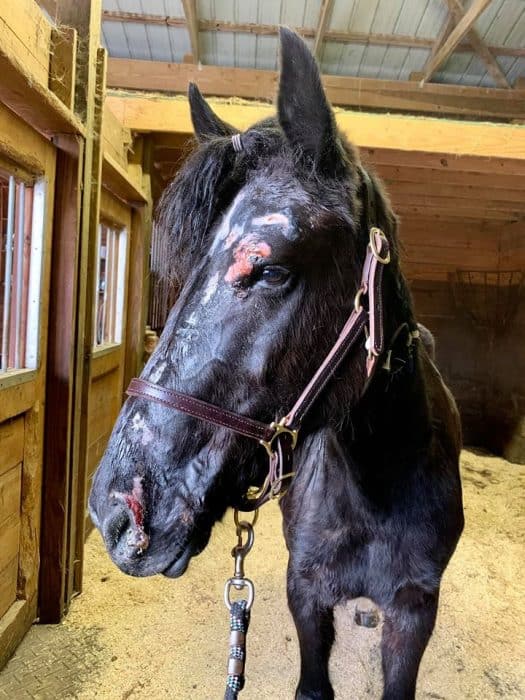 The next two months would call upon April’s horsemanship and commitment as well as Survivor’s will to live and adapt. Twice a day April treated Survivor’s wounds while balancing her own safety in close quarters. April knew well the careful dance required of her while treating painful wounds she was also gentling a wild horse. As Survivor began to heal, their bond and trust of one another became stronger.

“She is honest. She communicates so well,” said April wondering how so many people had previously misread the horse as unmanageable. “Even sedated she always gave me a warning kick or swished her tail when she was annoyed. Despite the pain and certain fear she was reliably good natured about treatments.” 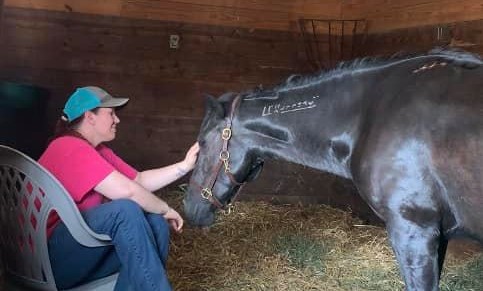 May 24, April and Survivor

The next 72 days started and ended with 2 hours in Survivor’s stall. April managed her time between Survivor, a full-time job and being a mom to four active children. On June 13th, a new milestone and emotional day for April. Survivor was well enough to move to more spacious accommodations outdoors.

What Happened That Day?

“No one could beat me up more than I did myself.”

To this day the Starks do not know how Survivor came out of the trailer they have owned for 8 years. There was no sign of structural failure. If anyone saw the accident, they have not come forward. Some details can be pieced together based on police reports and social media. Survivor was laying in the middle of Interstate 75 with all traffic stopped. Good samaritans held the lead line on the side of the road after she got up on her feet. Seemingly once she recovered from the initial shock, her instincts kicked in and she bolted free of them. The mare ran down the interstate responding police joining alongside attempting to guide her with their cars. As she ran off the interstate onto surface streets she was photographed running through a gas station, a police car in close pursuit. With enough patrol cars on hand, officers form a corral containing Survivor until the Stark’s arrival. 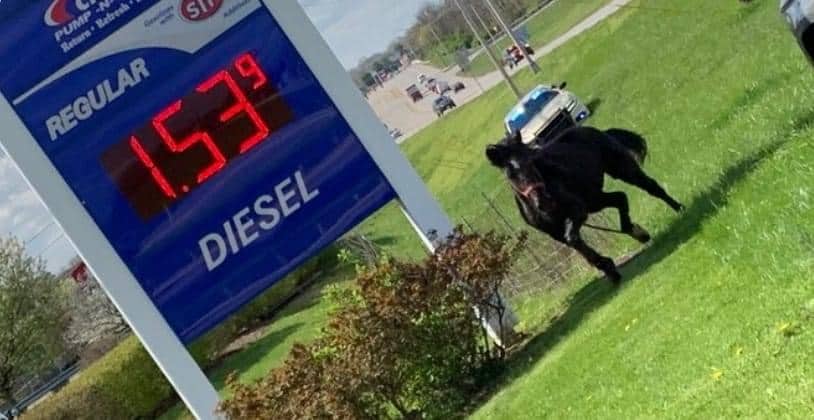 Survivor bolts through a gas station with police in tow.
(photographer unknown)

When April originally agreed to take Survivor the plan to work with her until she became a model citizen. Once she was broke and working consistently April would find her a good home. Then everything changed on April 2nd.

Survivor’s prognosis is for a full recovery though April believes she may have some limitations with her range of motion due to the fetlock injury. Survivor will become an ambassador for American Mustangs. Team Pappa Mike will feature Survivor in their advocacy programs and clinics as an example of the breed’s tremendous character and work ethic. Their hope is that Survivor’s story will inspire others to adopt a mustang from the BLM or TIP programs.

“I don’t really care what she is capable of doing,” said April. “I only want to make certain she is happy.” 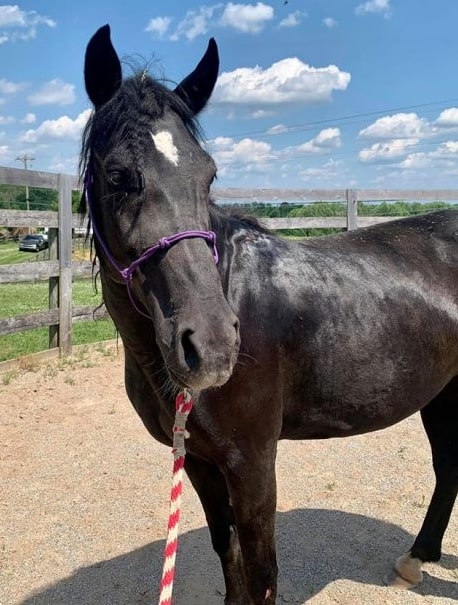 SAVE MONEY with WARHorses COUPON CODES

Do you have a tough time finding chaps that fit?
Not anymore! ProChaps can fit anyBODY XXS to XXL in half or full chaps sizes. ProChaps FIT and FEEL GREAT from day one!
Use coupon code: warhorses10 and SAVE 10% on your new ProChaps. 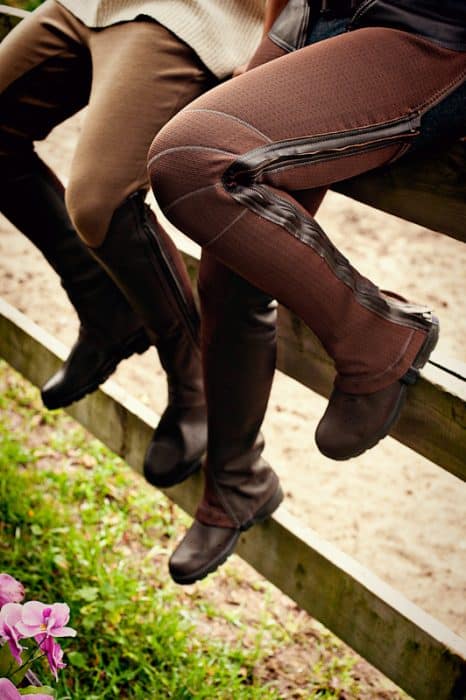 We carry the name brands trusted by veterinarians, and horse trainers across the nation. Shop our full selection of Horse and Pet Supplements today and discover how LV Performance can help your pet achieve their optimal health!

Save 10% with coupon code: WARHORSES10 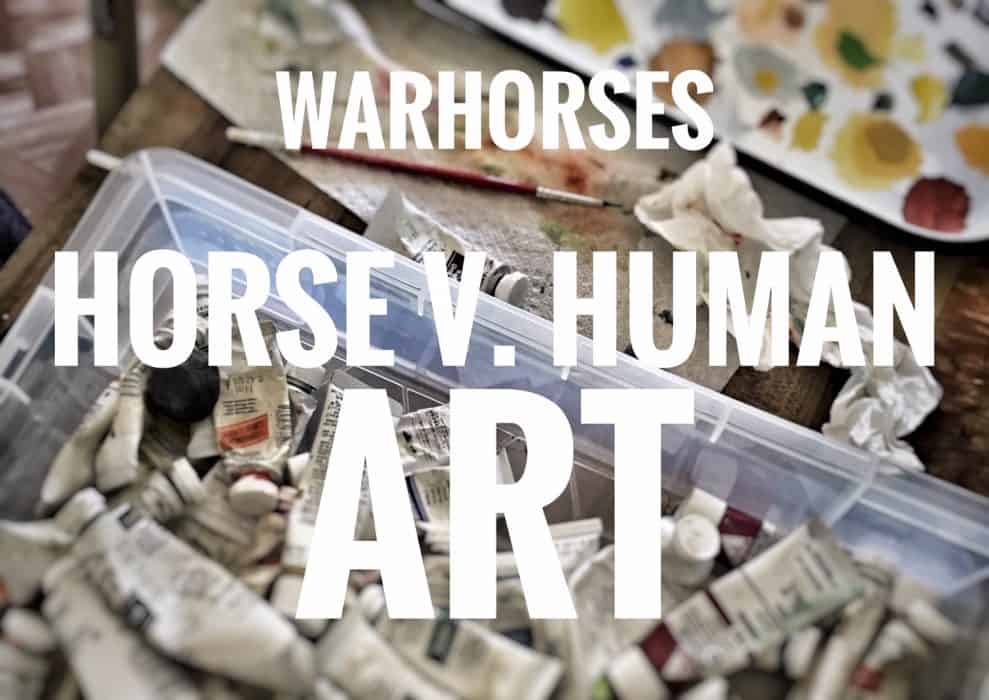