Henri de Toulouse Lautrec was born November 24, 1864 in southern France to an aristocratic family. When his parents separated, Henri went with his mother to Paris. Raised in an environment of privilege, Henri loved horses and rode frequently. At a young age, Henri sketched prolifically filling notebook after notebook, horses were frequent subjects.

As he reached puberty he encountered physical problems likely the result of inbreeding, his parents were first cousins. Both thigh bones broke which stunted his growth. No longer able to ride, he focused on art. One of his earliest instructors, Rene Princeteau, helped Henri channel his passion for horses into gestural lines that captured their energy and movement.

Henri studied art for many years and became a successful professional. Unlike other artists who remained aloof of their working-class subjects, Henri befriended them. He transcended class structure and immersed himself in the moment. He preferred to sketch on location and was often seated at a front row table at the Moulin Rouge or the backside of the race track furiously capturing the Paris life swirling about him with pen on paper.

He created more than 6000 paintings, drawings and prints during his brief 36-year lifetime. In celebration of his birthday, November 24, we hope you enjoy this collection of Henri de Toulouse Lautrec’s equestrian masterpieces.

What is the Highest Price Paid for a Toulouse Lautrec Painting? 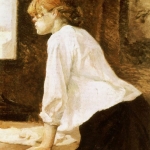 “La Blanchisseuse” sold in 2005 to a private investor