Sue Sal Hale wanted to play professional polo at a time when women were not accepted. Sue Sal found a way around the NO GIRLS rule.

Sue Sal was born in Southern California, her father, Grover Jones, a Hollywood screenwriter and mother, Susan Avery, a former ballerina. Sue Sal was only 4 when her father died. Her mother then married an actor and stuntman, Richard Talmadge. Talmadge taught the young Sue Sal tricks about hard horse riding, tricks that would benefit her later. She was riding her pony in the hills near a neighborhood polo field when she first saw a polo match. Excited by what she saw, Sue Sal began to play polo. She was a natural talent, excelling at the sport.

Unfortunately, in the early 50’s both club and professional polo matches were closed to female players. Sue Sal played despite the rules. She disguised herself as a man, A. Jones. By tucking her hair into her helmet, taping down her breasts and painting on a mustache with mascara she played and played well. After a match, she would quickly leave the field and duck into her trailer to change.

For years only her teammates knew her covert secret, but eventually it became a the most well-known secret in polo. Married in 1957, Sue Sal’s husband, Alex Hale, also supported her disguise. Sue Sal had figured out a way to play polo for herself but she did not relent with her pursuit to change the biased rule with the polo association.

After threatening to disclose her male masquerade and initiate a lawsuit, she was finally sent a membership card in 1972. Hale described it as “the greatest moment in my sporting life”. Finally a recognized member, she continued to encourage polo’s governing bodies to broaden its efforts to include the middle class in the sport–efforts that could easily have failed on behalf of someone with less conviction.

“She was a pistol…. From squabbling with the neighbor next door, to hostile letters to the USPA, zoning board, and anyone else with whom she disagreed. She did not hesitate to let her feelings and recommendations known and the world is better for it,” stated former teammate, Bob Schriver.

Her determination to demonstrate her prowess led her to ride in games through all five of her pregnancies and once, to finish a game after breaking her leg. She recalled the thrill of “going down a field with seven head of horses broadside, getting bumped by 900lb of horse and man, and just holding that line steady for two seconds to make the shot”.

“At times you’d have thought she had six children. With Polo being the sixth. She fought, defended, encouraged, supported and loved the sport as only a mother could. Polo is a better place today because of Sue Sal,” said friend, Randy Russell.

After she began playing openly as a woman, she was sometimes threatened by male players. She told them: “Gentlemen, better boys than you have tried.” It was another tip from her stepfather: to enrage them so much they lost control of their game.

“She was truly a mother to all of us in the polo community. She made us swallow the medicines of life and polo which we did not want, to see the lessons and values we didn’t see, to behave and perform the way that is proper of conduct in a game ever so maturing and modernizing in the battle fields of modern sports, and finally to live and breath with a code of honor which upheld All, on equal terms. No rank of any sort meant anything to her other than honorable actions, which upheld the right of each and everyone of us on equal terms, regardless of money, talent, equipment, horses, handicaps and any of the other things that we find to mark a division between us. She made herself the division lines of battle so that we could all get along better with each other,” stated eulogist, Ardeshir Radpour.

Sue Sal broke down the gender barrier and opened the doors for women to be admitted to the United States Polo Association. She was well respected for her competitive nature and sportsmanship. She coached polo at Cal Ply-San Luis Obispo and at the Marine Corps Air Station in Santa Ana. She continued playing polo matches into her 60’s.
Sue Sally Hale (1937-2003) 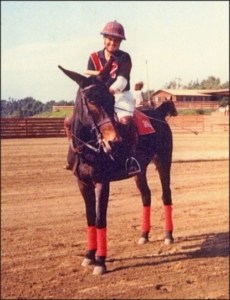 Man, Line, Ball
Live by the Rules and you won’t Fall!

Dash and Dart, Hurry and Scurry
Players and Horses all together in a Flurry

Whistle here, Penalty Shot there
The little white Ball flies through the air

Hooves and Mallets, Turf and Sky
Bypass life’s cares, as Time goes by

Total Exertion, the Ultimate High
A true test of Self, The why for which over and over we try

Sometimes unique, yet in the same breadth quite bleak
This game we play also out of which a living we eek

What would life be if Polo we didn’t play?
This game about Life called “Giants to Slay”

For this we struggle, laugh and pray,
Hoping to live long enough to Play and Play

On the field of Honor, that’s covered with grass
On top of a Horse with a Ball to Thrash

Edited from the Following References: