It’s an official Colorado summer heritage sport. It has a Triple Crown. It has its own “ass-ociation” (its phrasing, not mine) and members and by-laws. It’s pack burro racing, and it may be my new favorite thing.

The premise is pretty simple, as is many equestrian sports: contestants and their burros must complete a designated course (anywhere from four to thirty miles) with the fastest time winning. Burros are to be outfitted with a pack saddle and kit including a pick, shovel and gold pan (more on this later). Runners may not ever ride their burro (though in a charming role reversal, they are allowed to carry the burro). Pack burro racing is open to burros (donkeys) only — no horses or mules.

According to legend, pack burro racing finds its origins in the Rocky Mountain states during the 19th century: prospectors carried their equipment and personal gear on the backs of hardy and agile burros who could traverse the mountains with ease. One popular story states that two miners each independently found gold at the same location and had to race back to town in order to stake their claim before the other, leading their burros rather than riding because of their laden pack saddles; another legend states that washed-up miners started pack racing with their donkeys to try to win some money where they had failed out in the hills.

Regardless of which origin story you choose to believe — or if you’ve heard another one entirely — the Rocky Mountain states’ appreciation of the burro does trace back to the 19th century days of mining in the hills, and it is this heritage that the Western Pack Burro Ass-ociation (WPBA) honors by requiring all burros to race with a pack saddle and mining gear. For burros taller than 40 inches at the shoulder, the minimum weight of equipment is 33 pounds (shorter animals have no minimum weight requirement). Runners’ gear, such as water, energy food and a jacket, is not included in the weight minimum.

The WPBA recommends adopting a BLM burro, thanks to their intelligence, hardiness and physical ability. Training suggestions include camping trips with your burro, giving you ample time to expose him or her to some of the obstacles you might encounter in a race scenario — bridges, water crossings, paved roads, steep climbs and descents and plenty of other manmade and natural obstacles. The WPBA emphasizes training for both burros and humans, from gentle horsemanship (burromanship?) training to proper care and feeding schedules to fitness work. It’s recommended that humans be comfortable running a 10K before attempting pack burro racing.

Judging from the following video, there are a few individual techniques, all of which seem to work — leading the burro, running alongside the burro, or “driving” the burro from behind with the single lead. Only a halter and lead are legal tack; no driving harness, bridles or whips are permitted.

So if you fall into the narrow niche of trail runners who also like working with burros and want to combine your two passions, this is exactly up your alley!

The next pack burro race takes place on Saturday, June 10 — the inaugural Creede Donkey Dash of Creede, Colorado. This 10-mile race starts at 1 PM. If you go, make sure you share photos with Horse Nation on social media! 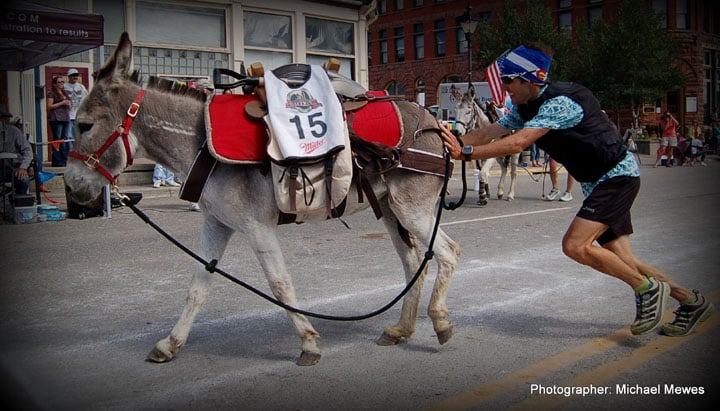 Not the winning team

Do You Love Burros?

Then You’ll Love this Post about Italy’s Lamb Toting Burros !