Dancer’s Image Won the Derby then Lost the Derby

In 1968 Dancer’s Image won the Kentucky Derby by 1 ½ lengths guided by jockey, Bobby Ussery. Three days later he was disqualified and the second place horse, Forward Pass, was deemed the Derby winner. It was the first time in the Derby’s 133-year history that a winner was disqualified. So what happened?

Was it Professor Plum with the Candlestick in the Study?
Peter Fuller, son of former Massachusetts Governor Alvan T. Fuller, owned Dancer’s Image sired by Native Dancer. The grey colt inherited his sire’s tender ankles and was particularly sore after winning his final Derby prep race, the Wood Memorial a few weeks earlier.

Dancer’s Image’s trainers consulted with the vet and it was decided to administer a dose of phenylbutazone, bute. At the time bute was legal at a few tracks but not at Churchill Downs. Traces of bute were found in his post race urine analysis and Dancer’s Image was disqualified.

“Any bute should have cleared his system by Derby day,” Fuller recalled. “I don’t know anything about drugs and I left that to people that understand, the vets and the trainers. I counted on them.”

The trainer, Lou Cavalaris, and his assistant, Robert Barnard, each received 30-day suspensions. The vet, Alex Harthill, nicknamed the “Derby Doc” for treating past winners, was not penalized.

Was there a conspiracy?
First, we need to consider the previous Derby, 1967, when Louisville was embroiled in the civil rights movement. Activists were trying to get the city to pass a law banning discrimination in housing and borrowing. Just before the Derby, a group of protesters held a sit-in on the stretch run at Churchill downs during a race. They promised to return on Derby day.

The city was hysterical worried that a large scale protest would disrupt the Derby. National Guard troops arrived and the Ku Klux Klan made plans to show up at the derby in full regalia. Protest organizers called in Martin Luther King, Jr who arrived and called off the Derby protest concerned it would bring violence and do more harm than good. Instead protesters held a rally in downtown Louisville on Derby day.

Fast forward to 1968 and the disqualification of Dancer’s Image.

Fuller was a supporter of the civil rights movement. Martin Luther King Jr. had been assassinated just a month before the 1968 Derby. Two days after the murder, Fuller donated the earnings from Dancer’s Image’s victory at the Governor’s Gold Cup at Bowie Race Course to Coretta Scott King, window of the civil rights leader.  He did so without fanfare but it became public knowledge at the Wood Memorial after a TV announcer mentioned it. Fuller’s gift drew praise from civil rights supporters and criticism from opponents.

“Most of them good, but some of them you couldn’t repeat,” Fuller said about the public’s reactions. “Later on, (philanthropist) Paul Mellon said, ‘Peter, you shouldn’t have mixed politics and racing.’ I wasn’t trying to mix anything. That sort of set the stage, and we were on our way to Louisville.”

Worried that someone might harm Dancer’s Image, Fuller requested extra security at the stable. His request was denied. Fuller described the guard on duty at his horse’s barn as “an old fella sitting in a chair and asleep.”

Fuller’s daughter, Abby Fuller-Catalano, was in the Derby winner’s circle with her father. At 9, she was old enough to know about the hate mail her father received for supporting the civil rights movement.

“I’ve had people say, ‘I know what your dad did and that took a lot of courage,'” she said in a later interview. “I think it offended a lot of people. That’s basically why the horse got disqualified. The horse was a Maryland-bred. My dad was a Northerner from Boston. I think definitely that all factored in.”

Fuller believe the disqualification was retribution for his support of Martin Luther King Jr. and the civil rights movement. Fuller vowed to never return to Churchill Downs unless he had another horse he knew for sure could win the Derby. He said he’d name the horse Dancer’s Revenge.

In Retrospect
Conspiracy theories aside, Dancer’s Image post race urine tested positive for bute which was banned at Churchill Downs and he was disqualified from the 1968 Derby and the $122,600 winner’s purse.

Fuller fought the DQ in court for several years. In 1970 a Kentucky court awarded the first-place money to Dancer’s Image but the decision was overturned on Appeal two years later in Kentucky’s highest court. Peter Fuller died in 2012, age 89. 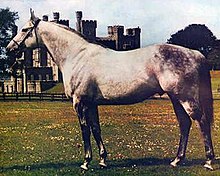 Dancer’s Image ran just one more race after the Derby. He placed third behind Forward Pass in the Preakness, but was disqualified for bumping another horse and placed eighth. He was retired after that.

The gray stallion was syndicated and stood stud at Glade Valley Farms in Maryland. In 1974 he was sold to breeders in Ireland and sold again in 1979 to renowned breeder Alec Head in France. He sired many European sprinters who raced well including; Godswalk, Lianga and Saritamer. He was sold one last time to stand stud in Japan where he died in 1992 age 27.

Throughout the rest of his life a billboard with Dancer’s Image hung at Fuller’s farm in New Hampshire proclaiming the colt as the Derby winner, even though the official record book says otherwise.

“We don’t put an asterisk by it,” Fuller’s daughter said. “To us he won the race.”

A Most Unusual Derby

What do you think WARHorses?

Watch the race below then share your opinion in our WARHorses Derby Poll.