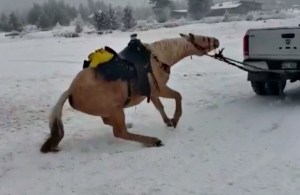 In November 2019, a disturbing video was posted to Facebook showing a horse tied and dragged behind a moving truck. As the truck moved forward in the snow, the lead rope became taut. As the horse braced against the pressure its hooves slipped through the snow. The truck then sped up dragging the thrashing horse the length of a football field.
In the original Facebook video (which was soon deleted) a woman filming is heard saying, “This (expletive) refuses to leave the ranch, so he’s pulling him across, cause he’s being a douchebag.” The video went viral eliciting widespread outrage. Authorities were inundated with calls of concern. The day after the video was posted Colorado authorities charged the horse’s owners with animal cruelty and a warrant to seize the horse, Trigger.

Their Day in Court

Amber Saldate, 33, shot the video and uploaded it to Facebook. In June 2020, Saldate pled guilty to misdemeanor animal cruelty. In August 2020, a judge sentenced her to two years probation, five days in jail and 100 hours of community service. Additional conditions include animal cruelty and mental health evaluations and treatment, quarterly veterinary visits for the family dog, substance abuse monitoring, anger management and evaluation. Salute is not allowed to train or acquire other animals.
John Saldate, 58, who dragged Trigger through the snow pled not guilting in June 2020 and went to trial in September. In January he was sentenced to one year supervised probation with no jail time. Salute must also pay a $400 donation and attend anger management classes and animal cruelty treatment. The judge also mandated bi-annual veterinary checks for a horse he currently owns. Salute also forfeited rights to Trigger. At his sentencing, Salute’s attorney submitted a plea deal arguing that he had veterinary testimony that the incident did not meet the statutory definition of cruelty to animals. The judge expressed concern over the sentence discrepancy but ultimately accepted the deal.

Trigger Gets a New Home

In July 2020, Trigger was adopted to a permanent home. His new owners, who wish to remain anonymous, have stated that Trigger will live out his days with their other horses enjoying a leisurely life that will not include riding. 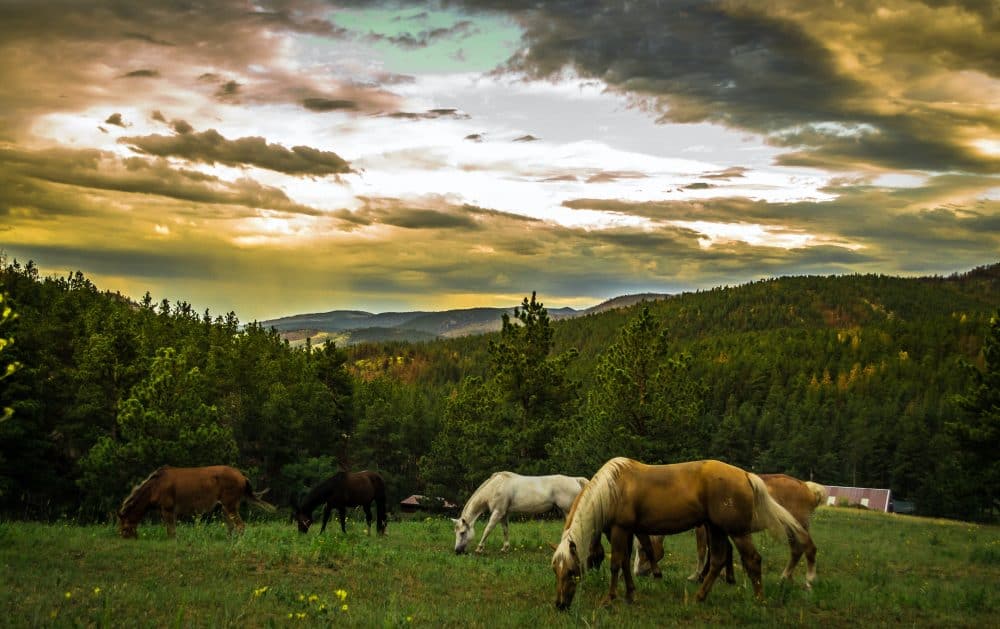 Where Hannibal Crossed the Alps

Are YOU Proud to Be a WARHorse?
Shop Our Swag – Many items priced under $10!