Today is the first day of spring and we can’t think of a better story to feature than one about springy, jumping horses. We considered writing about show jumping, cross country or puissance but settled on the rowdy, southern sport of Coon Jumping? You never heard of it? Well, we’re fixin’ to tell ya’ll all about it.

WHAT DOES IT TAKE?
A mule is a cross between a female horse and a male donkey or “jack.” The donkey part of their bloodline gives them unique muscular characteristics that enable them to do a standing high jump. Coon Jumping competitions are held to challenge the height a mule can jump from a standing start.

WHERE DID COON JUMPING ORIGINATE?
The idea for the competitions began years ago with coon (raccoon) hunters riding mules deep in the southern woods of the United States. During the hunt, there were often fences in the way of the chase. The riders would dismount and throw a blanket or jacket over the top wire, making it visible to the mule. Standing on the opposite side, the rider urged the mule to jump from a standstill, thus avoiding a long walk to the nearest gate. It was not long before people were trying to see whose mule could jump the highest!

WHAT MAKES A CHAMP?
Like all contests, there are rules. There is a small and a large division, which generally uses 54” as cut off line between the two divisions. A mule stands in front of a canvas curtain placed on a light horizontal bar and jumps from a stand still. Mules must come to a complete stop for one second before attempting a jump, standing in a box that is either 10 feet by 12 feet or 10 feet by 10 feet, depending on the size of the mule. Each mule is allowed three attempts to clear the jump. The handler cannot touch the animal or use a whip but must encourage it over the bar with voice commands. After a successful round, the height is raised 2 inches. The mule who jumps the highest, wins!

WHO IS THE BEST?
For years the reigning champ has been Radar, a Missouri Mule owned by Mike Call of Henley, Missouri. In 2014 at 23 years of age, Radar set the coon jumping world record at 68” during the Fort Worth Stock Show & Rodeo. He has won virtually every competition since – until last year. Sadie, owned by Les Clancy of Ozark, Missouri cleared 62” defeating Radar during the 2016 Fort Worth show. But there was certainly no shame in Radar’s loss (he still holds the world record) especially when the age difference is taken into account.

“That’s not too bad for a 25-year-old competing against a 7-year-old,” said Call, referring to Radar’s advanced years and Sadie’s youth. 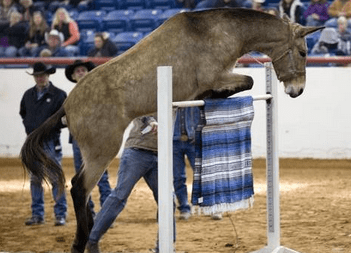 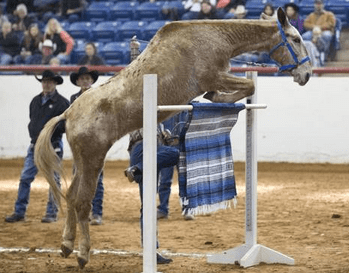