Coin Operated Horse Gets a Reboot

Vidler’s 5 & 10 in East Aurora, New York purchased the coin operated horse in 1962, over the years, Sandy has given rides to thousands of children.  Last week she was placed “out of order” for a few days while her worn saddle and stirrups were repaired. 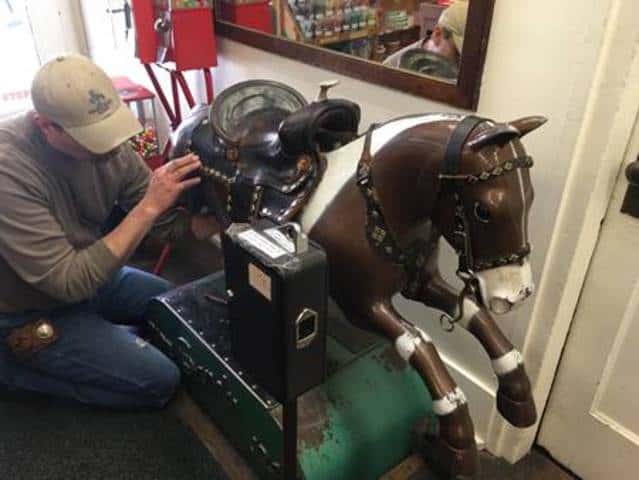 Repairman tends to Sandy at Vidlers 5 and 10 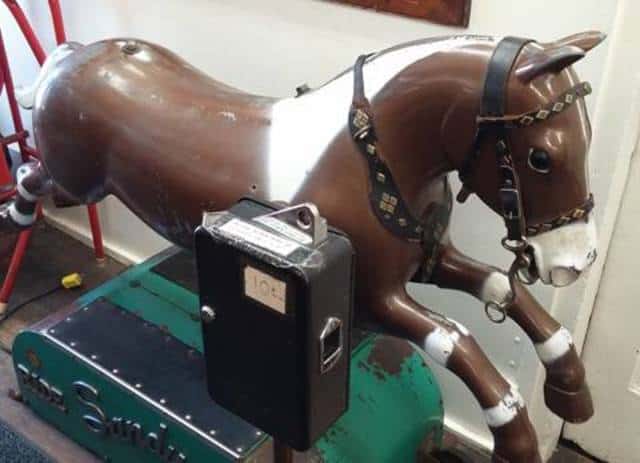 Kudos to Vidler’s who chose to repair Sandy instead of removing her to storage or worse, the dumpster. For decades, kiddie rides like Sandy have propelled the imaginations of children from sidewalks and storefronts to grassy meadows and wooded trails. As child, I saw little difference between riding a real pony or a mechanical one, both satisfied a need. 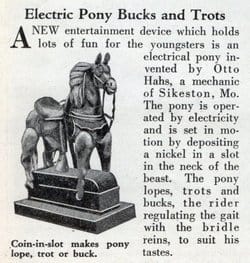 Mechanical horses were invented by James Otto Hahs. In 1931, Hahs built a mechanical horse for his children as a Christmas present. His children absolutely loved it and Hahs realized his idea had commercial potential. He designed a coin-operated version to sell. The first version featured wood carved horses but was too heavy so Hahs turned to casting aluminum figures. In 1932, the Hahs Gaited Mechanical Horse was winning design and invention awards. He teamed up with a distributor and received a percentage from each horse placed until his patent expired.

By the 1950’s “kiddie rides” were one of the fastest growing businesses in America, suited for developing suburbs, distributors placed rides at neighborhood shopping centers. They were an effective traffic ploy, placed outside stores the horses lured kids and parents inside. The rides were also extremely profitable each grossing about $375 a week or $5000 at today’s rate. Their popularity instituted change within the department stores themselves, many replacing their soda fountains to make room for kiddie rides.

In their HEYDAY there were more than 20 American companies making kiddie rides, by the 90’s about half that and today manufacturing has shifted almost entirely to Asia. As buying habits turn to online purchases, brick and mortar stores struggle for traffic but the coin-operated rides on the sidewalk are no longer an effective draw. Today’s kiddie ride manufacturers have targeted a new market – the home buyer, individuals purchasing for nostalgia.

Their numbers have significantly declined, but there is no reason to fear that coin-operated horses may soon be “extinct”. Thousands of diminutive horses are still giving kids rides across America. In fact, if you find yourself in East Aurora (between Buffalo and Niagara Falls) you might stop by Vidler’s and take Sandy out for a gallop.