Case #33: When People Do Bad Things to Good Horses

In November 2019, a video was posted to Facebook showing a horse tied and dragged behind a moving truck. As the truck moved forward in the snow, the lead rope became taut. As the horse braced against the pressure its hooves slipped. The truck then sped up dragging the thrashing horse the length of a football field.

In the original Facebook video, which was soon deleted, a woman filming is heard saying, “This (expletive) refuses to leave the ranch, so he’s pulling him across, cause he’s being a douchebag.” The video went viral eliciting widespread outrage and calls of animal abuse. Authorities were inundated with calls of concern.

Within a few days authorities had identified and charged the horse’s owners with one count each of animal cruelty, a misdemeanor in Colorado. A warrant was also issued allowing authorities to seize the horse named Trigger and transfer it to the Colorado Humane Society. A veterinary exam did not reveal obvious trauma but Trigger was sore and given pain medication. 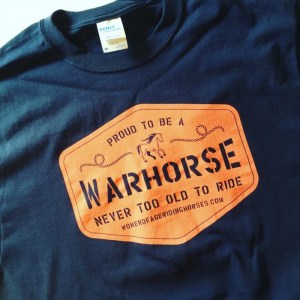 All WARHorses T-Shirts are on sale 25% OFF!