More than 200,000 people have been forced to evacuate fires in Southern California. Since Tuesday, four separate fires have consumed 116,000 acres. The largest, the Thomas fire, covers 96,000 acres and is the size of Denver, Colorado. As of today, it is only 5% contained. Fanned by Santa Ana winds of 60-70 mph, the fires spread 31,000 acres in 9 hours – one acre a second.

Horses are being led out of #CreekFire area on Osborne Street on Tuesday morning pic.twitter.com/CYzDVfTDmX

Horse owners near Sylmar have been transporting horses and other large animals to evacuation centers at Pierce College, the Ventura County Fairgrounds and the Santa Barbara Polo & Racquet Club. More than 200 horses at Pierce College are being treated for injuries including severe burns.

A reporter at Fox 11 Los Angeles, Gina Silva, discovered a horse who had fallen into a crevice at is tried to escape the flames.

Within minutes, firefighters and volunteers arrived and lifted the horse from the crevice. He was transported to a hospital then an evacuation barn. Kenny, 23 years-old, was reunited with his owner and will recover from his injuries. 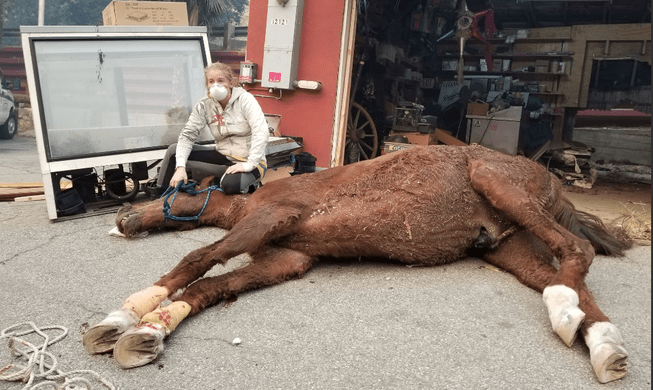 Sadly, help came too for horses boarded at the Rancho Padilla. The Padilla family has owned the ranch for 26 years and has seen the mountains around them catch fire before. Tuesday night Firefighters woke the family and told them to “get out now”.

29 horses perished when the barn roof collapsed at Rancho Padilla. 15 others survived evacuated with help from the Los Angeles Animal Control to Pierce College where they are being treated for burns.

“The fire is out of control,” horse owner Cris Fisher told one reporter. “We have stables all throughout these hills, we’re all helping one another.”

Hundreds of Thoroughbreds at the Bonsall San Luis Rey Downs training center were turned loose as barns caught fire. Groups of panicked horses ran between firefighters and trainers as the smoke intensified. Later in the day, many were transported to Del Mar Fairgrounds. Still others did not survive, some collapsed in the mele and others were trapped in their stalls.