Emily Wilding Davison was a British suffragette fatally injured at the 1913 Epsom Derby. Trampled by the king’s race horse, she died four days later. Speculation suggests she committed suicide in order to draw attention to the suffrage cause. No one will ever know her motive, she told no one of her plan and left no note.

Davison was born in London in 1872 and raised in a middle-class British family. she won a scholarship to study literature at Royal Holloway College, London but her studies were thwarted when her father died and there was no money for tuition. Emily became a teacher until she saved enough money to finish her studies at London University graduating with a BA. It was during her time in this male dominated academia that Emily formed strong opinions about women’s rights. 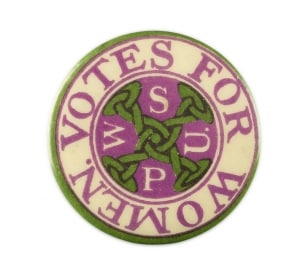 In 1906 she joined the Women’s Social and Political Union (WSPU). The group was a more militant offshoot of the National Union of Women’s Suffrage Societies (NUWSS). THE WSPU believed that by denying women the right to vote, they were therefore, unfairly cast as second-rate citizens. Davison was influential and known for her militant activism. She broke windows, threw rocks and set fires to mail boxes. She was arrested ten times, went on hunger strikes seven times and was force fed on nearly 50 occasions.

Davison was devoted to the suffrage cause and on more than one occasion proved she was willing to become a martyr. In 1912, she went on a hunger strike. To protest the prison’s attempts to force feed her, Davison threw herself from a balcony.

“I did it deliberately, and with all my power, because I felt that by nothing but the sacrifice of human life would the nation be brought to realise the horrible torture our women face. If I had succeeded I am sure that forcible feeding could not in all conscience have been resorted to again”.

On June 4, 1913, Davison attended the races at Epson Downs. During one of the races, she entered the track and was trampled never regaining consciousness. The horse, Anmer, owned by King George V, also fell but rose and completed the race without a jockey. The jockey, Herbert Jones, was thrown and suffered broken ribs and a mild concussion.

WARNING. The video below shows the entire event and contains graphic and disturbing imagery.

On June 4, 1913, Davison attended the races at Epson Downs. During one of the races, she entered the track and was trampled never regaining consciousness. The horse, Anmer, owned by King George V, also fell but rose and completed the race without a jockey. The jockey, Herbert Jones, was thrown and suffered broken ribs and a mild concussion.

Davison died on June 8th, the WSPU organized Davison’s funeral. More than 5000 suffragettes and supporters accompanied her coffin through the street’s of London. She was buried in the family plot in Northumberland. “Deeds not words”, the WSPU motto, marks her headstone.

It is certain that Davison was at the 1913 Epsom Derby to draw attention to the suffrage movement. Epsom was one of the premier social events attended by both the King and Queen Mary. The racetrack is shaped like a horseshoe with a large curve in the middle. It was from the curve that Davison slipped under the railing and stepped in front of the king’s horse holding a suffragette flag.

If Davison probably hoped her act would raise the profile of the suffragette cause. Instead, the public believed her insane, newspapers focused on the welfare of the jockey and horse and many suffragettes, horrified that her act may have been suicide left the organization. It would be another 15 years (1928) before British women over 21 won the right to vote.