Magic lives near Phoenix, Arizona under the care of Bob and Mary Manns. When Manns bought her in 2001, everyone told him Magic looked like an 18-year-old. It turned out she was already 30.

Magic has always been a trail horse but also worked in professional cattle cutting, pole bending and barrel racing. She competed as recently as 2011 at the Valley Center Vaqueros Club where she took home seven awards.

Manns saw Magic the first time during a barrel-racing competition. The young girl who was riding Magic had to “hold on for dear life,” Manns said. She ended up beating all the other horses’ times.

“I’ve never ridden a horse as fast and intelligent as she is,” Manns said endearingly of Magic. “She and I just have a ball.”

As recently as 2 years ago, Magic did the 10 mile trails through back canyons local terrains Santa Margarita River trail every week. Magic was a celebrity on the trail; everyone, it seems, has heard of the “really old horse.”

“She is a tank,” Manns says referring to her uncanny fearlessness on the trail. “Magic is always the first horse galloping ahead, and she loves to swim across the rivers.”

Today Magic continues to work as a beginner lesson horse on the Mann’s farm. She enjoys retirement and interacting with kids. Manns estimates she’s given hundreds of children their first riding lessons.

“Magic is a good horse to ride because she gauges the personality of the rider,” Manns said. “She can tell when she has a new rider on her back, and will go slower.”

Magic has showed none of those signs of advanced age. She’s still in perfect health, has never had major illnesses. Many horses have to change their diets by the time they’re in their 20s, because of their decaying teeth and an aging digestive system. Not Magic, she doesn’t even have a special diet, no supplements, just a hay-based diet.

“She does drink more water than any horse I’ve ever seen,” Manns said, speculating on Magic’s longevity. “Everyone kind of lives around her. She lives in her own world. You’ll go up to her to say ‘Hi Magic’ and she’ll have a bunch of hay on her head. She’s just adorable, she’s sweet.”

Magic is a rarity. She is older than most horses live to be, yet she is more active and in better health than horses half her age. In celebration for her 47th birthday, the Manns will make Magic’s favorite treat – carrot cake with carrot topping.

“That girl, there’s nothing she does halfway,” Manns said. 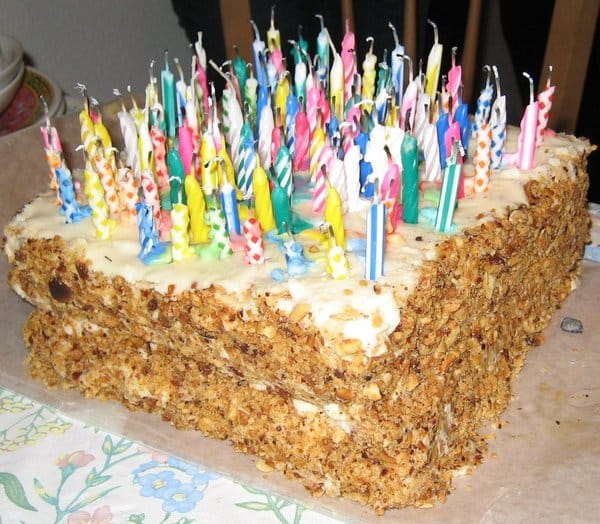 I sent an email to the Mann’s wishing Magic a “Happy Birthday” from WARHorses and received this response from Mary Mann:

Thanks for the acknowledgement and good wishes on Magic’s birthday. Magic enjoyed a party with her stablemates and some cut up apples, an afternoon of grooming, and a chance to graze in her favorite grassy pasture. The carrot cake will be served tomorrow!

Be certain to sign up for WARHorses monthly newsletter!