Being a shepherd in northern Italy is a centuries old occupation. Roaming herds of sheep have traditionally been tended by older men but in recent years many young Italians have chosen shepherding as their occupation. Italy’s challenged economy and financial austerity make it especially difficult for graduates to find employment. Thousands are opting for a simpler life and though the hours are long and pay is modest, they enjoy working outdoors with the animals.

In the spring shepherds are particularly busy driving flocks of sheep between pastures and tending newborn lambs. The terrain of northern Italy is varied from rolling hills to steep alpine mountains. Moving between pastures can be difficult for young lambs. Ever industrious, Italy’s shepherds found a solution – donkeys. 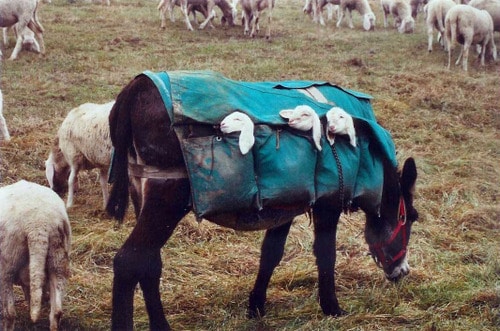 Used for centuries in northern Italy, donkeys are the ideal beasts of burden. Their physical size and nimbleness allow them to easily traverse narrow, rocky trails. They do not need to be led, they will stay with the flock and not wander off. They bond with the shepherds and will chase off predators that attempt to self-serve a meal off a flock member.

Shepherds outfit their donkeys with side saddles where newborn lambs are safely carried in large pockets over hazardous terrain. When the flock stops to rests, the lambs are returned to their mothers for a meal then reloaded into the pockets as the flock continues its nomadic wandering.

Recent studies have determined that sheep are as intelligent as pigs, rats and monkeys. They have quite advanced learning abilities and problem solving skills. They’ve certainly “pulled the wool over” the shepherds and donkey’s eyes, why walk when you can ride?