Her sire was, Le Filou, which in French means “pickpocket” or “thief”.  Her pedigree was impeccable and expectations for her racing career were high. However, those who worked with the fragile mare were skeptical. Light Fingers, trained by Bart Cummings, she would, at least for a time, sway skeptics and become the first of Cumming’s 12 Melbourne Cup winners.

The slight chestnut mare from New Zealand began winning as a two-year-old in 1964. Returning the following season, she dominated the track winning 7 of 12 starts and finishing only once unplaced. In 1965, She was entered in the Melbourne Cup at 15-1 and assigned a record weight for a mare, 52.5kg. While training for the race, Light Fingers pulled a back muscle and became ill with a virus.

On race day, a veterinarian administered a cortisone shot and she was sent to the starting gate. Heading into the final stretch, she was 5th but gained on her stablemate, Ziema, and won in a photo finish.

“In the last few strides she seemed to sense that something extra was needed. I could feel her gathering herself and she fairly dived for the winning post. I only had to wave the whip at her. I didn’t want to hit her. She was giving all she had,” said her regular jockey, Roy Higgins.

Her final racing season was plagued with injuries but she was entered again in the Melbourne Cup this time handicapped with 57kg weight. She placed second behind Galilee. Retired in 1967, Light Fingers had 13 wins, 33 starts and 13 placings winning both short 5 furlong (1000m) and longer 2 mile (3200m) races.

Another Thoroughbred bred, raised and trained by Bart Cummings was also accepted into the Hall of Fame this year. Cummings frequently stated that the big chestnut gelding, Saintly, was his favorite horse.

In the early 1990’s Cummings career was in financial jeopardy but Saintly’s wins in 1996 alleviated those pressures. Saintly won just one of his four starts as a two-year-old but ended the season with 5 wins. As a four-year-old he won the 1996 Melbourne Cup and Cox Plate, one of only 5 other horses (Nightmarch, Phar Lap, Rising East and later Makybe Diva) to win both prestigious races in the same season. Saintly only raced once more, winning the 1997 Orr Stakes then he bowed a tendon while training. Cummings made several attempts to race Saintly again but without success. He was retired in 1998.

“He was something special He was still growing up, still putting it together. We’d only seen half his potential,” said Cummings.

This Thoroughbred phenom burned up the tracks in the 1800’s. Archer was also inducted into Australia’s Racing Hall of Fame in 2017. Read Archer’s story. 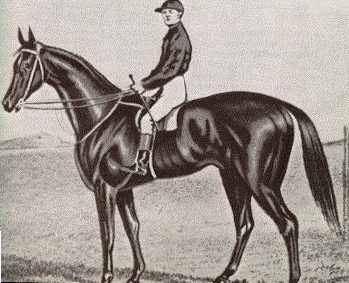