Our first 2017 AHF inductee won the first and second Melbourne Cups, a back to back record that stood for 70 years. 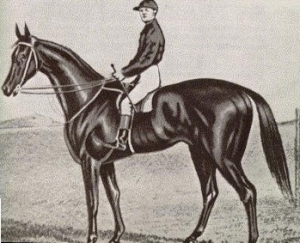 He was a large dark bay horse so large in fact that those who knew him called him “the bull”. He won 11 races of 16 starts. Race fans could usually spot him amongst the field by his size or by his odd rolling gate. If you still weren’t sure which horse was Archer, you could easily recognize him from the rail. Archer was the horse with his tongue lolling out of his mouth.

Archer was trained by Etienne de Mestre and raced from 1860 to 1863. His most notable accomplishment was that he won the first Melbourne cup in 1861, then won again the following year. However the third Cup was not a charm for Archer.

More than 4,000 people including many dignitaries attended the first Melbourne Cup, November 7, 1861. The track had recently been redesigned adding a straight finish line in front of a large hill that could accommodate more spectators. 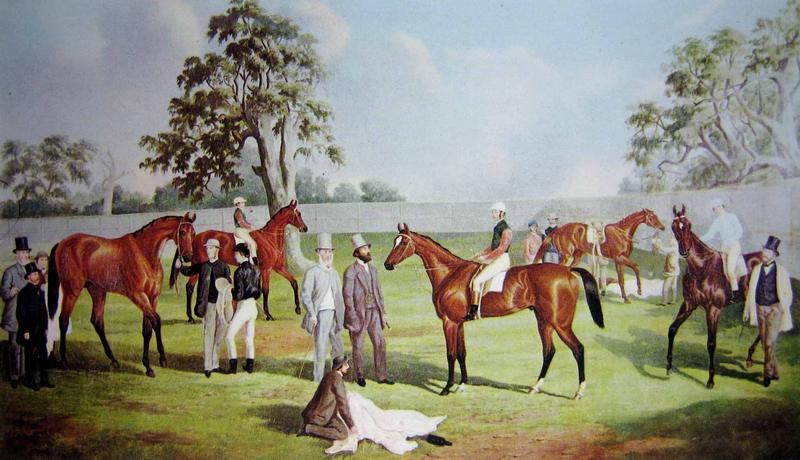 17 horses raced for the 930 sovereigns prize money and a pocket watch. The race favorite was not Archer who went off at 6-1, the betting public preferred Mormon, at 3-1. The 2-mile race was marred by a false start then a fall at the top of the straight that took out three contenders (two died). Archer won by six lengths over Mormon posting a 3.52 time, the slowest ever recorded.

The following year de Mestre and Archer returned, this time as the race favorite 2-1 in a field of 20. Despite being handicapped with extra weight, Archer again defeated Mormon winning by eight lengths in 3:47.

De Mestre planned to return for a third win but fate would have its hand. De Mestre waited until the last day to confirm Archer’s racing to the stewards. Unfortunately he did not realize the day was a public holiday. The telegram was delivered one day late of the deadline. The Victoria Turf Club held to the rule and refused the entry. De Mestre was furious and vowed to never race in Melbourne again (though he did years later and won 3 more Cups).

Archer raced once more at the Championship Sweepstakes in Melbourne, October 1863. He was ill and lame and raced poorly. Archer’s fans were outraged that he was not scratched to which de Mestre issued a public statement to the effect that “his horses were not public property”. Days later de Mestre announced that Archer had “gone on one of his legs” and he was scratched from all upcoming races.

In August 1864, Archer was seriously injured during veterinary treatment. He survived but was never able to race again. He was retired to stud at Exter Farm at Jembaicumbene where he had been foaled. He made no mark as a sire, and was poorly patronized because of his ‘short pedigree’. He died at age 16 in December 1872 having wandered into a field and gorged on green barley that caused a fatal inflammation of the lungs.

Myth Buster
Racing lore claims Archer walked from Nowra to Melbourne, 502 miles (809 km) to race in the first Melbourne Cup but that myth has been disproved. Newspapers of the day record his arrival via ship. In Archer’s day trainers would send their thoroughbreds via steamer or rail to the racetracks. From the ship and train stations horses were often walked some distance to the racetrack, 20 miles (32.2km) was not uncommon. When Archer retired the railway ended quite a distance from Jembaicumbene. He would have walked or been ridden 155 miles (250 km) to his retirement.