An Epic Tale of Poo

How do you track an army, an enormous army comprised of 30,000 men, 15,000 horses and 37 elephants that crossed a snowy mountain range 2200 years ago? The answer just may lie at your feet.

Hannibal Barca lived in the Mediterranean when the Roman empire reigned supreme (BC). Considered one of the greatest commanders in history, his greatest military achievement came at the start of the Second Punic War (218 to 201 BC). He led an army intent on challenging the Roman army face to face.

Comfortably lodged in Italy, the Romans were complacent, secure in their dominance of the region. They were certainly safe from any invasion embraced by the surrounding mountains. The mighty Pyrenees and Alps provided a natural, impenetrable barrier – so everyone thought, everyone except Hannibal.

Hannibal led his army over those snowy mountain ranges. Their journey was difficult and many perished. They ascended more than 7000 feet above sea level enduring the harshest conditions. Adding to the havoc the troops were repeatedly attacked by mountain tribes who dropped boulders onto them. The descent was even worse. At one point the army was stuck on the mountainside with no way to advance. They were forced to build a pathway from rubble to continue.

Hannibal and his surviving army endured unimaginable conditions – avalanches, starvation, harsh weather and deadly cliff falls. They went on to accomplish their mission, they conquered Italy, defeated the Romans and ruled the region for nearly 16 years.

Hannibal’s brilliant strategic feat has been a point of study since. The Roman writer Polybius (200-118bc) interviewed army survivors documenting in great detail events of the great trek. Historians since have studied these classic texts, reviewing geographic and environmental references to determine exactly where the army crossed the alps. This point has been a contention for millennia. 2000 years of conjecture but we may now have an answer. Scientists teamed with historians to determine where Hannibal crossed the Alps.

THEY WENT THIS WAY!

Just below the Col de la Traversette mountain pass is a peaty bog. It’s the most likely spot where such a large number of troops could have rested after their mountain descent. The soil rich enough to support vegetation that the animals would have needed for grazing. 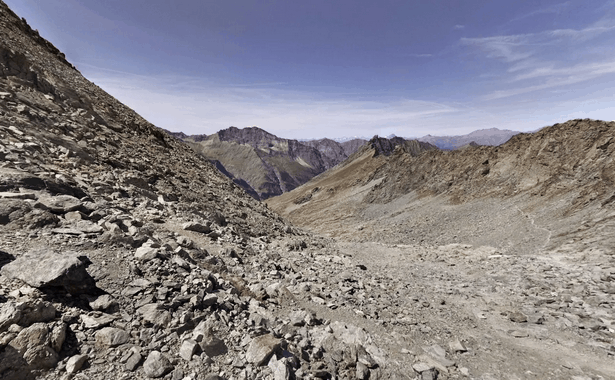 Here, about 40 cm down, scientists discovered that the soil had been greatly disturbed then compacted, much as you’d expect from a lingering army of horses and elephants. Radiocarbon dating identified the material to the correct timeframe of Hannibal’s’ crossing, 218 BC.

Mud samples collected and studied in labs found more evidence including organic molecules found in horse poop. Samples also contained high levels of DNA from the bacteria “clostridia” which resides in the gut of horses (and humans). And they identified horse tapeworm eggs.

The likelihood of large number of horses trudging along this particular route, at the time of Hannibal’s crossing strongly suggests that the Col de la Traversette pass was Hannibal’s route.

2200 years of guesstimation and the best clue is provided courtesy of horses. The poop of ancient WARHorses has shown us the way.