A Tale of Three Twinkies

April 6, 2017 is National Hostess Twinkies Day, a salute to the cream filled cake invented in Illinois in 1930. When we were young, Twinkies were standard store in our kitchen cupboard. When we did our homework, made our beds mom rewarded us with Twinkies.  Good memories.

Twinkie? A silly name for a kids snack. But it got us thinking here at WARHorses. We horse owners have a propensity to name our horses with cute names…we wondered. Has anyone ever named their horse Twinkie? You betcha!

A Tiny TWINKIE
Probably the most well-known, Twinkie, the first mini trained as a guide horse for the visually impaired. Trained by Janet and Don Burleson of the Guide Horse Foundation in 1999, the idea for service minis occurred to them during a visit to NYC. Impressed by the “street smarts” of the horses around Central Park they decided to explore working with horses as a alternative to dogs.

“There is a history of relationships between horses and the visually impaired.” Janet said, “I knew of a blind rider who successfully showed in Hunter Pleasure. Her horse had learned to look out for her, to travel straight and to navigate the corners. There was such a bond between that horse and rider. Don and I also considered needs in other areas where horses would be useful, such as, helping to pull wheelchairs for the physically-challenged and assisting people who are able but have difficulty standing up.” 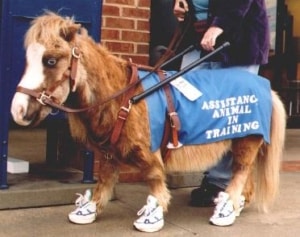 Many visually impaired appreciate the benefits of minis as an alternative to traditional dogs; minis can be housebroken, they do not get fleas, they offer a longer service lifespan 20 years compared to 6 for dogs and they are stronger so people can lean on them to help stand. Miniature horses have been officially approved as guide animals as stated in the Americans with Disabilities Act.

Twinkie, the first official guide horse, has been a media super star for over a decade. He is now retired living out his days as a mascot for the Guide Horse program. 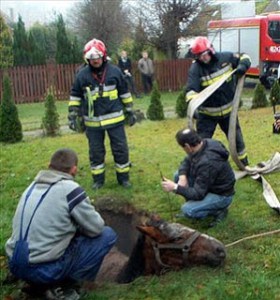 A “Bad” TWINKIE
Our next Twinkie horse is a 2-year-old mare from Poland. In 2012 this Twinkie got herself into a bit of trouble. She leaped from her paddock and ran the neighborhood. Ran until she fell into a 4-foot-deep muddy drainage ditch then couldn’t get out. Firefighters came to the rescue (as they always do), pumped out the mud, formed a makeshift harness and hoisted the irritated Twinkie (her ears were pinned the entire time) to firm ground.

Said her owner, Janusz Topolczyka, “I don’t imagine she’ll be keen on going on another walkabout anytime soon.”

And finally a STINKY TWINKIE
Stinky Twinkie is a chestnut thoroughbred mare who raced in 2005. She did well with 3 wins, 3 places and 8 shows earning $49,112. She must have been retired from the track then resurfaced in 2009. She was at a breeding farm, Middle Creek/Norcrest Farm in Troupsburg, New York. It was not a good place. The horses at this farm were so badly neglected officials confiscated them. 85 neglected horses were transported off the property under the direction of the Finger Lakes SPCA and Vicki Bolton (then 57), chair of the Alfred State College Agriculture and horticulture Department. Vicki, her college students, local rescues and community volunteers took in the suffering horses. Stinky Twinkie was identified by her lip tattoo. She was one of the survivors and now enjoys the good retirement she deserved.

We’ve met three horses named Twinkie. Perhaps all this Twinkie talk has given you a hankering? Go for it! Today is a holiday, enjoy! Twinkies are a mainstay at every corner convenience and grocer store in the North America. For our friends down under who can’t buy Twinkies in the store – http://www.usafoods.com.au/  – you’re welcome!

What is the Twinkie mascot’s name? 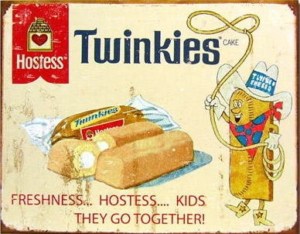