I worked at a tack store a couple of years ago when a customer, probably in her mid-forties, came in to buy only what her trainer told her to buy, right down to the brand. As I remember, she was stressed. She had just bought her first horse—to the tune of $75,000, her husband publicly groused. That seemed a little extreme for a first horse, at least in my world. Was that her decision or her trainer’s? Only she knew the answer. I wondered what her dream had been when she began riding and whether it had been derailed when she handed the decision making to someone else.

Some mid-life women who return to riding and horse ownership are less inclined to experiment with their riding and training or hesitant to break away from trainers and coaches who aren’t the right fit, an article posted on a private social media group recently suggested. The author, a long-time associate of an internationally known trainer, observed that phenomenon over several years. I had previously read a post on another page that seemed to support that observation. The poster was experienced and had owned horses but lost confidence and quit riding after a bad fall. She eventually resumed riding with the guidance of a trainer, then purchased a well-trained horse at her trainer’s recommendation. The trainer had worked with the horse for months and wouldn’t yet permit her to ride it. Meanwhile she leased a lesson horse while paying board and training on the horse she had purchased. She didn’t agree with her trainer’s techniques, wanted to try a different discipline and was thinking about moving, but was reticent to say anything. She was understandably frustrated—enough to seek online support and advice from her fellow equestrians.

I find mid-life liberating and I have been thrilled to discover and pursue new training and instruction methods, but I understand the hesitance to make changes. A few responders to the social media posts said they felt more empowered as older women, but several others wrote to say they lack confidence and even when they disagree with or feel pressured by a coach or trainer they won’t speak up. Some are afraid of the trainer’s reaction, some think they just need to wait it out, some think they don’t know enough (but they know enough to be bothered.) Responses to the post by the woman whose trainer wouldn’t let her ride her own horse also were mixed. Some empathized, many were shocked if not outraged that someone else controlled what she could and could not do with her horse.

A few years ago I jumped back in to horses after about a 15-year break. I had decades of experience and owned horses until then, and I kept them at home. I was knowledgeable but rusty. On top of that, I had moved out of state and knew no one in the horse community. I found a barn, took a few lessons, listened, researched, and all that passion and knowledge resurfaced. 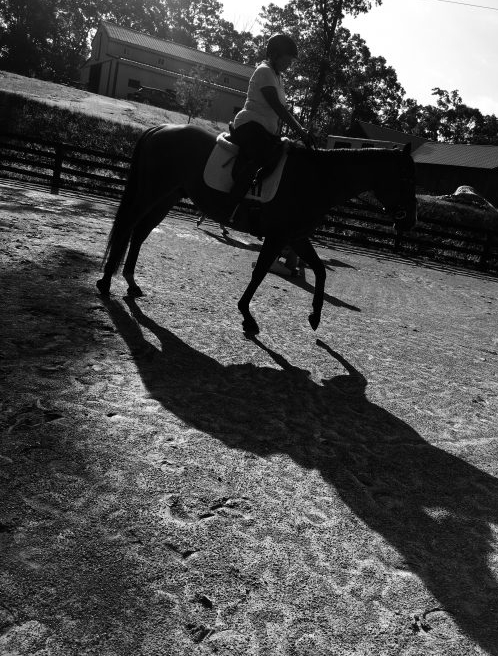 When I bought a horse a few months later and boarded her at the barn I had gotten to know, it was a multi-level adjustment—almost too much at one time. In the past I walked out my back door and had 100% responsibility for my animals. Now I was driving 40-50 minutes to the barn every day versus once or twice a week for a casual ride or lesson, I had limited control over the care of my horse, and I was still refreshing my horsemanship and re-establishing my confidence. I made mistakes and embarrassed myself a few times but ultimately I wanted to have more control when it came to my time and my horse. I decided to look for a new barn. I agonized, agonized, about moving for a few months. I worried about losing touch with the friends I had made. I worried about hurt feelings. I worried about the unknown in a horse community I didn’t know well. I worried that I’d make the wrong decision. It was almost paralyzing. As it happened, I found a nice barn closer to home and I moved my horse. Nine months after that I moved again when my priorities evolved and the barn’s focus and culture weren’t the right fit. The last decision to move was much easier than the first. I felt re-established as an equestrian and horse owner.

If responses to the social media posts are any indication, some returning and new mid-life riders do struggle with decision making and change. My own struggle with a simple decision to switch barns is a perfect example. It doesn’t have to be that way. Most of the innumerable methods and styles of horse care and riding can be explored without fully committing, providing space to learn. To get a sense of what feels right. What makes sense. What may be a better fit. Or even to acknowledge that the current path is the right one. But be careful. Too much information can be just as inhibiting as too little, leading to frustration.

I imagine most of us are fairly skilled decision makers by now. Some run successful businesses or are highly regarded professionals. Some are artists and entrepreneurs or have jobs and vocations in which being confident about what we know is second nature. We hire or dismiss people who work on our homes and vehicles without thinking twice. We decide where, when, and how every day. We don’t hesitate, we seek advice and then we choose. So why is it so hard to made decisions around our riding?

Do you struggle with self-confidence and indecision when it comes to choices in your riding? The PDFs below provide a list questions for new and returning riders that may help clear the path toward decision and change. What would you add to the list?

Best of luck in your riding!

Ask Yourself These Questions 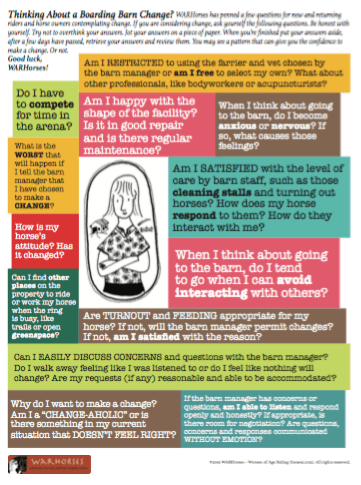 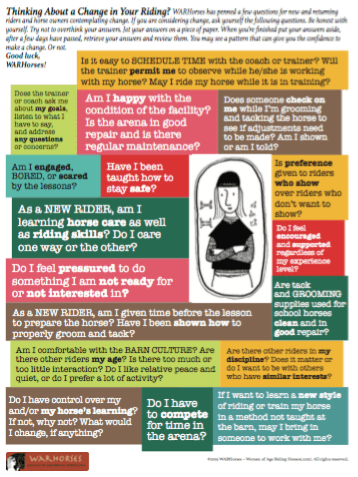 We invite you to register for #WARHorses bi-monthly newsletter the POOP SCOOP. Each issue includes features and special offers exclusive to subscribers!