Artificial Breathing for Racehorses by Means of Tracheotomy.

Silver Tubes Inserted in Their Throats as Skillfully as in a Human Being.

Successful Operations Nowadays Which Make Sick or Broken Down Animals Almost as Good as New.

February 16, 1896, New York, NY (USA): There is no corner of medicine or surgery in which greater advances have been made of late years than the curing of valuable race, carriage or saddle horses and the performing of necessary operations upon them. In fact the horse surgeons of to-day are a class of scientists that are hardly second to those that operate upon human beings.

On the race track now a number of crack horses are running who have had the operation of tracheotomy performed upon them, and who carry silver tubes in their windpipes, having been transformed from broken down steeds to racers that are still capable of their best work. At the January meeting in Manchester, England, the horses that came in first, second and fourth were all “rank roarers,” each provided with an artificial apparatus for creating.
There is no case on record where false teeth have been supplied to a toothless horse, but false eyes are common, and there are cases of false tails put on so naturally that the counterfeit was unnoticed and the horse could actually switch it as well as if it had been his by nature.

The putting of a tube into a horse’s throat and windpipe is an operation that any good doctor can perform. It changes a horse that is practically ruined for any really good work into an animal that has still the best of his life before him, and it can be down without the slightest danger.
The operation of tracheotomy is performed in precisely the same way as it is in the case of a human being, and with even greater facility. on account of a horse’s throat being much larger. The animals is invariably put under the influence of an anesthetic, either chloroform or ether as a rule, though either is often used.

The tube inserted is generally of silver, though sometimes of brass or nickel plate, and consists of two pieces of metal, fattening one into the other and holding perfectly firm. After it is safely inserted it had to be taken out and thoroughly cleansed every three or four weeks. In order that a horse may not draw too much air and dirt into his lungs through this tube, a tiny filter of cotton is put into it at its external opening. The tube itself averages a half-inch in diameter. The first notable use of its insertion was with that famous racehorse Ormond, and so successful was the use of it proved that more and more of these tubes are being inserted every year.

A rotting or a running horse requires a full quantity of “wind” when he is at work on the track. If his windpipe gets stopped up, even in a small degree, he can travel slowly with ease and safety, but for great bursts of speed he would be useless. With the metal tube leading into his windpipe, which tube is really a third nostril, he is supplied with a full quantity of “wind” for even the most severe trials.

No longer is it an uncommon occurrence for glass eyes to be put into a horse. This is an operation precisely similar to that in the case of human beings. The eyelids hold the false eye well in, and turn a decidedly damaged animal oftentimes into a very good-looking one. These false eyes are made to look perfectly natural: they are, in fact, the acme of art. All are made in Paris, though readily procured here.

As to optical work on horses, that particular branch of equine healing is still in its infancy. There is no known horse, that has ever worn spectacles to correct impaired vision, though, there have been many instances where spectacles of plain window glass have been put upon racers to keep the mud ont of their eyes on the track.

In Face, however, optical experiments with horses are being made, and new facts are being constantly acquired. Naturally it was impossible to put up a chart directly in front of the animal’s head and inquire of the beast what letters he could see, and what letters he could not. Recently a complicated instrument has been devised by French veterinarians somewhat on the telescope principle. The horse’s head is held perfectly steady, and a tub is adjusted so that the surgeon can look down into the animal’s eye and study it carefully, an electric illumination being turned on deftly just where it is needed. The results obtained with this instrument are not yet known.

Quite as interesting is the building up of a false tail for a horse that has lost his caudal appendage. The tail is made, precisely as a woman’s false switch is made, from the tail of another horse. It is made on to a sheath, which is carefully drawn over the stump and secured with vastly. With the crupper on, no signs of the splicing are noticeable, and the horse has just as good a tail as nature gave him.

Speaking of false tails leads naturally to the subject of “docking.” That is an operation that has occasioned much controversy in the past, and has been stigmatized by the Society for the Prevention of Cruelty to Animals as simple torture. But in the opinion of the most eminent veterinarians the horse does not suffer anywhere near as much as is supposed. Dr. Thomas G. Sherwood, a member of the Royal College of Veterinary Surgeons, and now for several years in this city, said in the course of an extended interview not long ago:

“Docking is simply chopping the tail off. A “docking knife” is used, a knife hinging on a piece of wood grooved for the tail to set in. A single cut goes right through. A ligature – a tight band of rubber – is put on just above where the docking is done. If it wasn’t for that ligature, the horse would feel the pain a lot, but it numbs the nerves. Besides this a “twitch” or a “twister,” is put on the horse’s nose. A “twitch” is a piece of rope running through a short stick, and is tightened up until it causes intense pain. The nose is more sensitive than the tail and, consequently, the horse’s attention is distracted, and he hardly feels the cutting and the “searing.” Generally a man stands by holding up one of the fore legs to prevent plunging and kicking.”

Chronic lameness in horses is best cured by cutting a nerve in the foot. The nerve is not only cut, but a small piece is taken out of it. This operation is termed neurectomy, and is generally performed by the aid of injections of cocaine. If the nerve is simply cut and a piece is not taken out it will often grow together again, and another operation may have to be performed. If done carefully it is an effective way of curing a horse but without the use of an anesthetic it causes the animal intense pain. 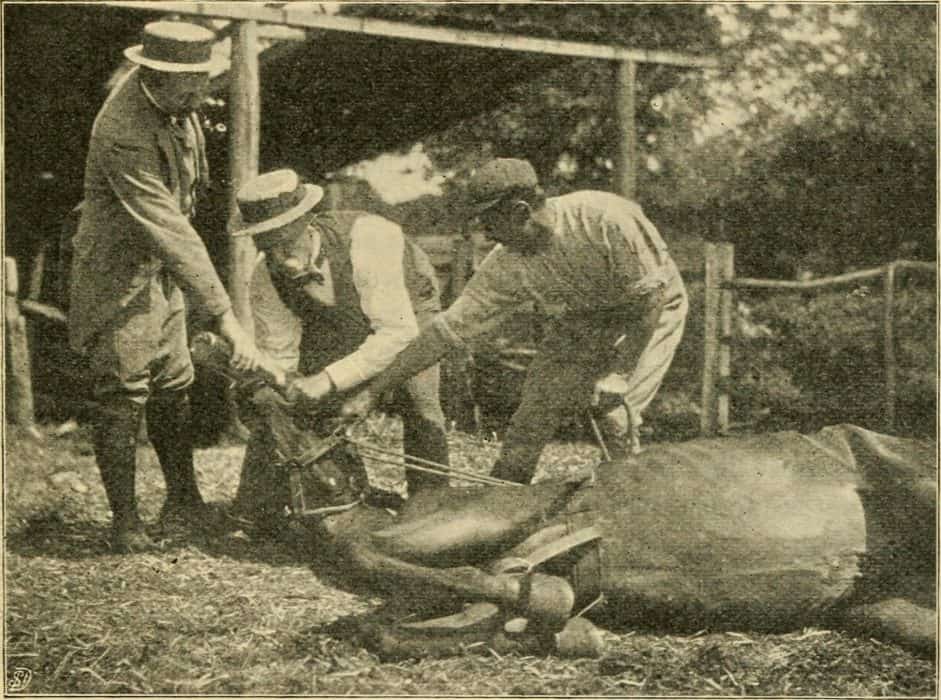 It seems curious to think of curing a horse of nervous disorders, but veterinarians actually have accomplished this. Dr. W. J. Gill relates an interesting instance. It is well known that race in practice when pitted against their own stable companions simply will utterly fail on a public track in competition with strange beasts. This is nothing more or less than simple nervousness, and it can be cured in precisely the same way that a man’s nerves can be steadied by giving some simple remedy which will have an immediate effect, and will “bolster him up.”

Dr. Gill told of a trotter who failed utterly on the first heat of a race, although his private performances had been very remarkable and he was the favorite of the day. What was the matter with the horse the doctor at once saw. He was suffering simply from plain, downright nervousness. A dose of scannable Indica or Indian hemp, was administered hypodermically, with the effect of bracing up the animal to such an extent that he not only distanced all the others in a way beyond precedent, but went halfway around the track again before he could be pulled up.

Horses are often stimulated just before they run or trot by having a pint of whiskey or water administered at the post, poured directly down their throats through a tube. This is another excellent cure for nervousness. The skilled veterinarian knows just what quantity to give the animal.

Few people know that horses are “peroxuled.” In the case of a team well matched in everything except color, it is a simple matter to color the coat of the darker one by the use of this chemical. The “white stockings” that many horses have. that is, the white hair on the feet, can be turned black very quickly by being treated with ultimate of silver.