Taylorville, ILL (USA) April 1880: Near the hour of sunset of Saturday, April 24, 1880, the western part of Christian county was visited with a terrible cyclone, which swept everything in its path and was very destructive of life and property.

The storm entered Christian county about four or five miles northwest from Morrisonville and traveled in a northeasterly direction, crossing the south fork of the Sangamon river at Willowford bridge, and thence passing about two miles west of Taylorville to a point about five miles north of Taylorville, where it apparently lifted up and passed away.

In its course it passed over and destroyed many comfortable homes and much valuable property.
News of the storm was received at Taylorville, shortly afterward, and the excitement that prevailed among the inhabitants was simply wonderful. There was a great demand for horses and rigs of every kind and character to visit the scene and care for those who were injured, but owing to the darkness of the night and the downpour of rain, it was almost impossible to obtain any definite results until daylight on Sunday morning.

As soon as it was possible, the wounded and dead were cared for, and the scene of destruction was visited on Sunday by thousands of people, and with one accord it was acknowledged by all to be by far the greatest and most destructive storm that ever visited this section of the country.

There were standing in the barn at this tenant house occupied by Mr. Oyler, two horses; one was tied to the manger and the other to a post that was set in the ground: the barn was entirely destroyed and every vestige of it swept away except the one post at which the horse was tied. The horse tied at the manger was picked tip by the storm and carried the distance of about 30 rods northeast and badly crippled while the horse tied to the post remained there and was not injured. In the wake of the storm Mr. Miller found chickens, rattlesnakes, together with many other objects of interest, and he says the feathers were picked from the chickens as close as though they had been prepared for market, but it was a mystery where the rattlesnakes came from, evidently carried there from the timber.

Be certain to enter our monthly CAPTION CONTEST for a chance to win a great prize like last month’s winner. Connie Allen won a WARHorses t-shirt “The Old Gray Mare Ain’t What She Used to Be – She’s Better”. 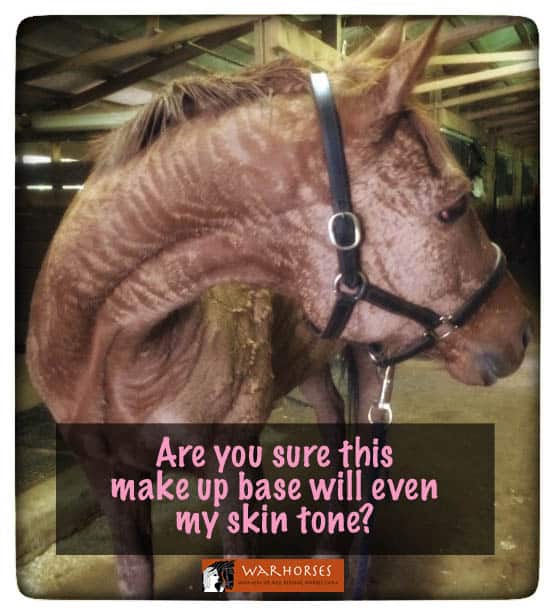 Read stories you won’t see on the website, learn some of the behind-the-scenes workings of the WARHorses team and receive special offers and discounts exclusive for newsletter recipients.