Mrs. Lewis Hurt Thrown From Carriage and Both Arms Fractured

BURLINGTON, IA, MAY: Ex-Mayor Charles Lewis received news yesterday to the effect that his wife had met with a serious accident Wednesday afternoon. She was visiting in Burlington, where Mr. and Mrs. Lewis’ three daughters, Mrs. Samuel Gilbert, Mrs. Luke Palmer and Mrs. S. A. Burroughs reside and at the time of the accident was driving with Mrs. Harriet Gilbert, mother of her son-in-law, Samuel Gilbert. The Burlington Hawk-eye gives the following account of the accident:

However, word was received in the city this morning that Mrs. Lewis sustained the fracture of but one arm, the other proved to be a sprain. A peculiar coincident is that both Mrs. Lewis sustained — fractures of the right arm near the wrist, in identically the same place. The report says that they are doing nicely.

Mrs. Harriet Gilbert, widow of JOHN W. GILBERT of Central avenue and Vine street, and Mrs. Charles Lewis of Iowa City, were thrown out of the Gilbert carriage in a runaway which occurred a little after 4 o’clock yesterday, afternoon, starting at the corner of Maple and Fifth streets, The horse were frightened by a bicycle which passed very close to one of them. 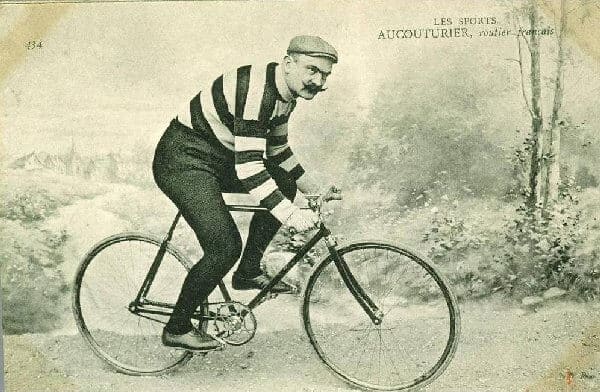 They jumped and broke one of the tugs, or it came unfastened from the double tree it is not known which. The horses ran down Fifth street to a point opposite C. W. Beltz’s residence, just south of the Burlington railway crossing, where the driver, seeing a train of cars passing on the track below, turned the horses to the curb. The right fore wheel struck the curb capsizing the carriage, and throwing all on the occupants to the ground. Mrs. Gilbert had her right arm broken at the wrist, Mrs. Lewis had both her arms broken at the wrist, and was somewhat bruised about the face. Their granddaughter Harriet Gilbert, a little girl of eight years, escaped uninjured, being thrown clear onto the grass, and the driver was not seriously hurt. Medical aid was speedily summoned and Mrs. Gilbert was taken to her home. Mrs. Lewis, who is the mother of Mrs. Luke Palmer, Mrs. Samuel Gilbert, and Mrs. A. S. Burroughs, was taken to the residence of Mr. Luke Palmer. None of the injuries are believed to be of a very serious character, expecting that the two ladies will be confined to the house for a considerable period, while the bones knit. The drivers followed the houses, capturing them in a nearby coal yard, and took them home. The axle to the carriage was slightly bent, otherwise the vehicle was uninjured. No blame is attached to anyone, save to the carelessness of the bicycle rider in riding so close to the horses’ heads at such a great speed.

Originally Published by The Iowa Citizen, Iowa City, IA 22 May 1903