Fell 60 Feet but Not Perished 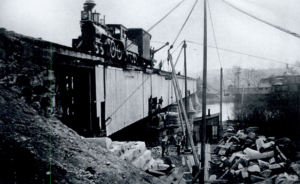 The Tin Bridge built in the 1860’s over the Blackstone River. Photo Credit: W. Caswell, Jr.

NEW HAVEN, CT, MAR: Patrick Frahar hired a horse in South Manchester Sunday. It ran away at the railroad crossing at Buckland, and two hours later was found, together with sleigh, stuck fast in the Tin bridge, two miles down the track from where it started. While some men were attempting to unharness the horse it was frightened by the approach of a freight. It plunged and went over the bridge falling 60 feet to the bank below and rolling into the channel. It was finally gotten out and does not show a single scratch now. The only harm to the sleigh was a broken shaft.