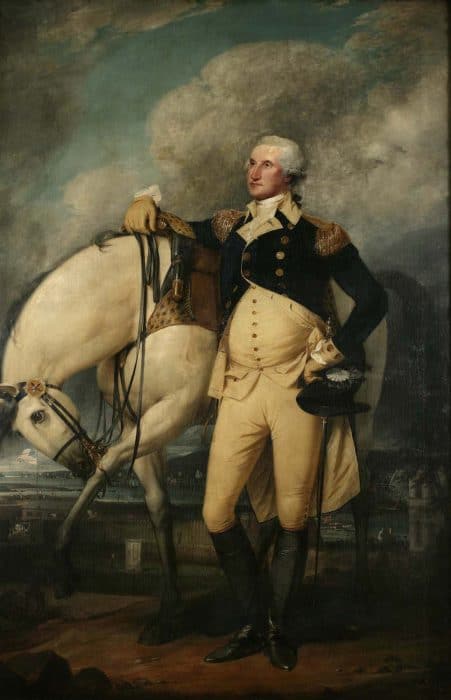 New York, September 18, 1790. The President’s Portrait, Is finifhed by Trumbull – and a fine thing it is; defigned and executed in his fuperior ftyle of excellence. it is a full length, in his uniform of blue and bugs – boots and fpurs – head uncovered, – moft nobly relieved, in contract with a luminous cloud and fine light fky – nearly a front pofition, with his right hand and arm thrown on the faddle of an elegant white horfe, with inimitable eafe – the beaft in the action of biting the middle-joint of his near foreleg: – This pofition of the horfe fhows his neck to great advantage, while it leaves the PRESIDENT’s head, as it ought to be, the moft confpicuous object in the picture. There are diftant profpects of particular and interefting fcenes, as accompaniments. The whole piece is defigned to convey to posterity an idea of THE MAN, at that most intrerefting period, when he finished his career of military flory – the evacuation of New-York. it is there-fore a warm, and highly animated bufinefs in every respect.

Originally Published by the Gazette of the United States, New York, NY, September 18, 1790