A bit of context first. The “Horse Show” refers to the National Horse Show founded in 1883 by a group of wealthy, influential sportsmen. The reporter, Cholly Knickerbocker, is a pseudonym used by a series of society columnists writing for the New York American and New York Journal. The writer penning as Cholly is actually John W. Keller.

Cholly Knickerbocker and the “400”

New York City, 1896. For the first time in the history of the Horse Show a question has arisen as to the possibility of its decline as a social function. Heretofore the horse has been a mere excuse for social display. New York has literally turned its back on the equine exhibit in order to study the human exhibit. When the arena boxes were filled the centre of the amphithetre had no interest for the spectator. 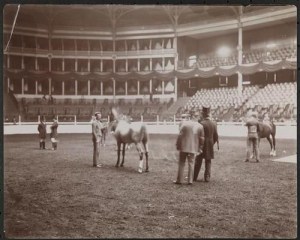 But this year there has come an ominous change. In the first place, the auction sale of the boxes showed a decided failing off from the sales of former years. Horse Show directors found excuse for this in the hard times, the election excitement and half a dozen other things that shot far of the truth. In the second place, and here we encounter a stubborn fact that may well alarm the owners of the Horse Show gold mine, an analysis of the box holders discloses the unpleasant fact that the crème de la crème of New York society is but slightly represented. If the heaviest of our heavy swells are going to the Horse Show this year they are keeping it to themselves; something that they never did before.
One looks through the list in vain for the Vanderbilts, the Sloanes, the Twomblys, the Shepards; for Seward Webb, August Belmont, Perry Belmont, James L. Kernochan, John Jacob Astor, James J. Van Alen, the Lorillards, the Potters and all that contingent from Westchester and Hempstead that was never known for its modesty. Surely all of these people are not so poverty-stricken that they couldn’t go if they wished to.

There is no doubt at all that many of the names on the list of boxholders are mere dummies, but I doubt seriously that these stand for the Vanderbilt set. There is something more in all this than a sudden and inexplicable modesty. The contention is made that the whole Vanderbilt contingent and Perry and August Belmont have decided to taboo the Horse Show because Mr. and Mrs. Oliver H.P. Belmont are to be conspicuous there. I can not believe, however, that family resentment can be carried that far. Surely it is not an unpardonable offence for Oliver Belmont and Willie K. Vanderbilt’s divorced wife to marry each other, and if it were, Madison Square Garden ought to be large enough to hold the people who like it and the people who don’t. 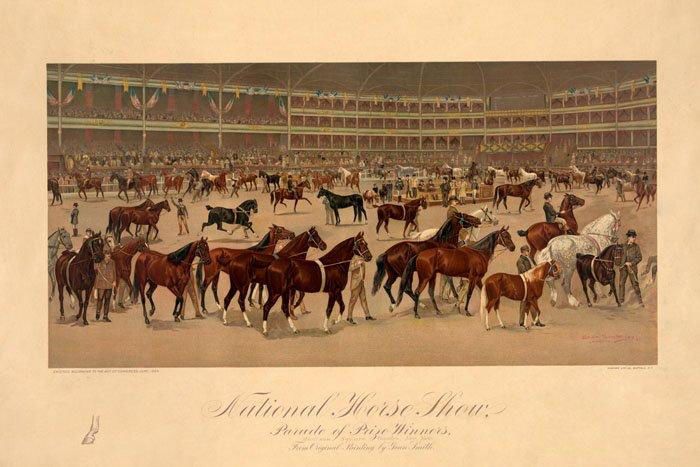 Of the people who will have boxes at the Horse Show this year the most interesting will be Mr. William C. Whitney and his bride and the Oliver Belmonts. Society is on the qui vive with regard to the Whitneys because it is generally accepted that the ex-Secretary of the Navy is going in for a social career of unusual brilliancy. These are the people who are advertised to occupy the conspicuous boxes, and I have no doubt that they will make an excellent showing. If some of them are a trifle new, it will not matter, so long as they serve the purpose. In an exhibition where new clothes count for so much too emphatic objection should not be made to new people. The average spectator can’t tell the real heavy swell from the imitation, anyway. The only difficult is that if the realy heavy swell stays away from the Horse Show the imitation won’t come to it, and that is what troubles the directors. Meantime we are all guesting as to what will be the exact outcome of the so-called Vanderbilt defection. Cholly Knickerbocker.