He Stops a Runaway Team and Thereby Saves Many Lives.

CHICAGO, IL May: Officer Ted Richards is one of the policemen in gray clothes who ride up and down Michigan Avenue. He was on duty yesterday morning when an immense crowd gathered in front of the Leland Hotel to see the bicycle racers start down the road to Pullman. Just before the word was given for the start of the throng, which was wedged solidly in the street, was terrified by the sound of rapid hooves and the sight of two big coach horses galloping down the roadway. Their driver was 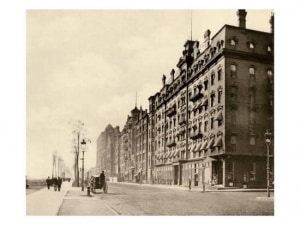 dragging with all his might at the lines, but he wasn’t checking the speed of the runaway team and the carriage was swinging from side to side. Neck and neck with the team rode the policeman in the gray clothes. He was striking his white horse with his club and digging in his spurs till the blood ran from the flanks. When he got a foot ahead of the team he guided his mount in and smashed one of the big coach horses on the side of the head with his club. The team swerved under the blow and the policeman clutched at the line, missed then, and was nearly thrown from his saddle before he could recover. There was a fat man with a mustache and goatee in the carriage. His white face, covered with perspiration, could be seen glaring hopelessly through the window, and he was roaring loudly for help. The crowd was in greater danger than he was. Unable to escape through the dense mass behind the front rank in half a minute he would have been crushed beneath the mad hooves of the runaways. When the policeman in the gray clothes missed the reins everybody thought it a frightful accident was coming. But the policeman in gray clothes was the kind of policeman one reads about in books and sees in Chicago. He drove the spurs deep into his horse and the animal gave a spring and again came abreast of the team. Then the club went up in the air and fell on the skull of the nearest runaway. The team swung in and the policeman followed them into the curb raining blows upon them with the stroke of a thrasher. He came near losing his seat once, when the carriage pole struck the saddle, but he finally forced his game to the curb, where the carriage wheel struck a lamppost, and the race was over. The people who came to help the bicyclers start gathered around the policeman and cheered him till he rode away blushing and pulling his cap over his eyes. While the crowd was cheering the fat man climbed out of the carriage and crept away mopping his forehead. It was Dan Wren, the member of the boodle county board.

Originally Published by the Chicago Herald, Chicago, IL 31 May 1891