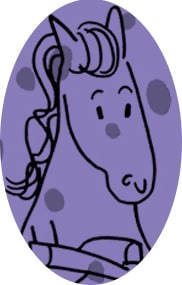 Who is Dear Appy? I get this a lot. “Who are you? Is that your real name? How did you get started? Where do you live?” Well, let’s just get this over with so I can get back to dispensing advice and answering your questions.

Yes, my real name is Appy. I have no idea how old I am (equines don’t track that kind of thing) but I have a lot of life experience. I have mentored and been the favorite of many new riders, often young humans in Pony Club and 4-H and Interscholastic Equestrian Association (IEA), but sometimes I teach adults after young riders move on. I was lucky to have a family early on who liked to try everything. I’ve pulled a cart, jumped courses, gone trail riding, dressed up for Halloween (please, never again) and babysat youngsters who needed better manners. I tolerate all species as long as they show proper respect but I’m particularly fond of cats. I have had a few homes but life has been comfortable and I’ve seen a lot. I’m now in an ideal situation where there is a lot of activity and a fair amount of horses coming and going, but I’ve been told I will never have to leave. It’s nice to be appreciated.
I’m part Appaloosa, a smattering of Welsh pony, a little Connemara, and a smidge of Mustang. I was bred to be smart, sound, and athletic. I am solidly middle of the pack in my herd. The reader is excused from thinking I would be the alpha mare but frankly I find that role exhausting. No one really listens to the alpha, they just worry about staying out of her way. I suspect humans rarely go to their alpha for advice and find others in the herd who can offer counsel. I want to be accessible, but make no mistake, I don’t put up with nonsense. Especially from humans. I admit to no malice but it isn’t my fault if the human’s toe is too close to my foot at the same time I’m being crowded, or when some young female human screeches to her friends at the top of her lungs on a trail ride at the same time we reach a swimming hole and I need to cool off. Or when a young human tries out a pair of spurs and puts them on upside down so that I’m constantly taking jabs in the side, and then she finds herself inspecting the dirt in the arena. I mean, there are consequences for inattention and lack of respect. Seriously, people. Think ahead.
Somewhere along the line some of the horses and a few humans started asking me for feedback on various issues. I’m sometimes astonished by the lack of common sense I see around me but not everyone has had the benefit of my experience. So, I’m happy to offer my advice. I look forward to hearing from you.

Then the horse said, “pull my finger”

Dear Appy, I'm really good to my horse. Why does she feel the need to fart at the precise moment I'm grooming her tail or giving her a good scratch? Flatulent Filly Mom Dear Mom, [...]

Dear Appy, My person takes so long to mount it’s hard standing still. Especially when she puts her foot in [...]

Dear Appy,  My barn has a lot of windows, they provide great lighting and a way for the breeze to [...]

Talk to the Tail

Trying to Catch a Few Z’s

Dear Appy, Is there something wrong with laying down to take a nap? Several times a day, I stretch out [...]

To Blanket or Not To Blanket – That Is My Question

Dear Appy, What are your thoughts on blanketing horses during cold weather? Does my horse need it? Signed, Don’t Know [...]

What Did I Do Wrong?

Dear Appy, I don’t understand what I did wrong. For many years I lived in a small barn in the [...]

Dear Appy I have a rather embarrassing question to ask. I love riding and have a terrific horse. She is [...]

Dear Appy, Why does my horse poop in his water bucket EVERY NIGHT? Signed, Rubber Gloved Dear Rubber Gloved, [...]

Dear Appy, A new horse just moved into my barn. She’s ok, kind of keeps to herself. The problem is [...]

Dear Appy. My horse has a glorious tail. He seems very proud of it but I worry. It seems the [...]

Dear Appy, My human has been bawling since Christmas because “Santa didn’t bring me a new horse.” Excuse me, ‘New [...]